In 1974, the Rev. Jerry Campbell went to the basement of the Iliff School of Theology library and used a scalpel-like blade to separate a cover made of a Native American’s skin from a history of Christianity book.

Forty-six years later, the United Methodist elder calls the act of removing that grotesque cover “one of the half-dozen most significant acts of my 43-year professional working life.”

The removal of the cover by the then-assistant librarian, who later became president of United Methodist Claremont School of Theology and Claremont-Lincoln University, was an attempt by Iliff’s administration to put a horrible episode in school history to rest.

For 80 years, the book, bound in the tanned hide of a murdered Lenape Indian, was displayed in a glass case outside the library at the United Methodist seminary. Donated in 1893 by the Rev. R.M. Barns, a Methodist minister, the book was written in Latin and appears to have been considered a unique curiosity. In a 1934 story, The Rocky Mountain News called it “a priceless vestment for the teachings of brotherly love.”

The Rev. Jerry D. Campbell, former president of both the Claremont School of Theology and Claremont-Lincoln University, served as assistant librarian at The Iliff School of Theology early in his career. Photo by Jon Hooten, courtesy of the Rev. Jerry D. Campbell.
“I remember thinking, ‘Good grief, this is the skin of a human being,’” Campbell said. “I just remember thinking this is a terrible thing to have here and be kind of celebrating it.”

The president of Iliff at the time, Smith Jameson Jones Jr., insisted there be no publicity about the transfer of the cover to the American Indian Movement of Colorado, to the point of having the small group at the ceremony sign nondisclosure agreements. The Native Americans planned to give the remains a proper Indian burial.

“It all comes down to money,” said Jill Fleishman, an attorney and Iliff alumna who was involved in efforts in the 2010s to prompt the administration to be more open about the issue and seek atonement in some way.

“They didn’t want to take a chance that their donors would stop giving money to Iliff,” Fleishman said.

The rest of the book was put in a safe in the library, and Jones ordered that the issue not be discussed among faculty and staff members.

There it sat until Tink Tinker, a member of the Osage Nation, arrived in 1985 at Iliff to teach American Indian cultures, history and religious traditions. A fellow faculty member, the Rev. Clarence Snelling, a United Methodist, pulled him aside and informed him about the book saga.

Tinker said his reaction was “nausea” and “revulsion.” He considered walking away from the job. But he had spent all his savings to move to Denver and put a down payment on a house that he would have lost if he left. He wasn’t aware of any other jobs that fit his qualifications.

“I only came back during the weekend, when I could … work out the whole building with one of our smoking medicines,” he said. “I was able to walk through the whole building — not through private offices — but most classrooms and the areas to which I had a key. I was able to speak with the man whose skin was flayed and tanned, and ask his permission to be in that place and talk to people about these things.”

With that accomplished, Tinker decided he would remain, but he wouldn’t be silent about the book hidden away in the library vault.

“I felt I could be a burr under Iliff’s saddle,” he said.

Tinker started writing and teaching about the book, and eventually Fleishman and other students formed the Native American Justice Counsel in 2015 to raise awareness.

“The students were aghast,” Tinker said. “Faculty were supportive, but my colleagues of color understood much more clearly than my white colleagues.”

White colleagues considered the book issue “an oops moment,” Tinker said. “Oops, we can’t do that again.” There were five Iliff presidents from 1981 to 2013 as the book remained hidden from view.

“When I came to Iliff, within two weeks of being here, I asked the librarian to bring it to me,” Wolfe said. “I wanted to see it.”

Noting that some institutions are currently trying to come to terms with their ties to the Confederacy, Wolfe decided the book and its legacy should be faced.

“I thought this was an opportunity for … Iliff to tell the truth about it and turn upside down the tendency for institutions to protect their brand by trying to hide these things,” Wolfe said. “Instead, let’s be honest about it and talk about it and live into it.”

Since then, Iliff has held two conferences about the book. The first, in March 2019, featured six Native American speakers discussing the issue, with non-native participants limited to listening. In October of the same year, a second conference featured presentations from Native American scholars.

The United Methodist Commission on Religion and Race provided a $35,000 grant to support that work, Wolfe said.

Plans for another get-together were postponed by the coronavirus, but ideas are circulating about ways the school can reach out to the Native American community. 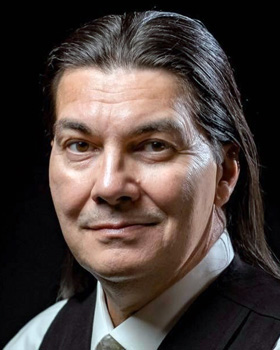 “That book is a powerful symbol and not just about one individual whose skin might have come from his back to make a book,” he said. “That represents the true history of the Americas and the attitude taken by the conqueror called colonizer, and it still exists today. That’s the teachable moment I’m talking about.”

Zunigha envisions a new curriculum at Iliff that studies the roots of prejudice against people of color back to the 15th century. About $200,000 has been raised for a chair honoring the now-retired Tinker and it’s hoped that $2 million will eventually be raised to help finance such an effort.

“The Doctrine of Discovery and Vatican papal decrees from the 1450s to the early 16th century empowered European nations to go and conquer and kill and steal if necessary with impunity, because they have Christ’s absolution,” Zunigha said.

Fleishman suggests that Iliff give a part of its 8-acre site containing its campus to Native Americans, as both symbolic and practical gestures.

Jill Fleishman is an attorney and an Iliff alumna. Photo courtesy of Jill Fleishman.
“The movement for giving land back is picking up steam,” she said.  “When they say they want their land back, they’re talking about not just property. They’re talking about the genocide of their culture, and how they have been treated for the last 500 years in this land, and how they want to be recognized as their own people and have respect from the people of the world.”

A plot of land to be used as Native Americans see fit “would go a long way toward establishing respect for indigenous peoples,” Fleishman said.

There has also been talk about an annual event focusing on Native American concerns, along with remembering the story of the book covered with human skin, Tinker said.

“I want to make sure that Iliff, a hundred years from now, still remembers that we did that.”

Telling the stories of Jewish musicians who tried to bring hope to Nazi Germany concentration camps and ghettos has led musician Kellie D. Brown in a new direction. She’s training for the ministry.
Social Concerns