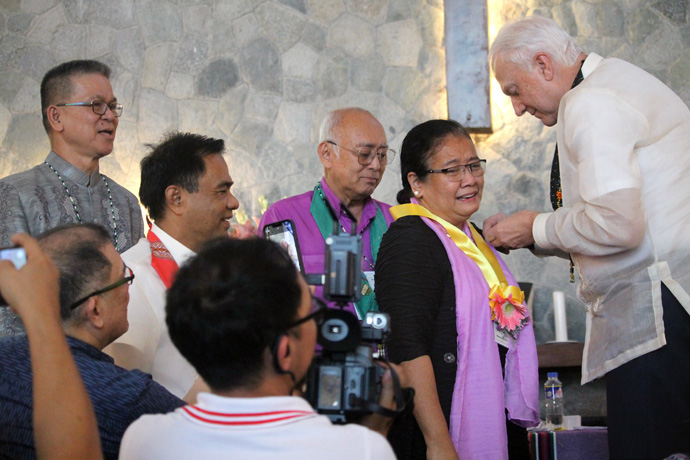 Delegates elected Estrella, 57, on the 20th ballot on Nov. 26 at the central conference’s meeting at Wesleyan University-Philippines in Cabanatuan City. She received 362 votes out of 460 valid ballots cast. She needed 307 to be elected.

Estrella was the second bishop elected at the Nov. 24-26 meeting.

Conference delegates and guests were all agog in celebrating the election of the first female bishop in the conference’s history.

Estrella told UM News that many people have been predicting that she would be the first woman elected a United Methodist bishop in the Philippines.

“So many people have told me that I would be the first woman bishop in the Philippines, since I was just a local pastor — even when I have not proven anything yet. I just laughed and never took it seriously.”

Estrella said that she has supported and campaigned for women candidates since she became a delegate to the Philippines Central Conference.

“Now that this long-awaited dream has been fulfilled in my election, it feels so surreal. I am truly humbled and thankful to God for this historic election.”

She said that God would help the church navigate through the challenges it faces.

“Instead of worrying, I am praying that the future of The United Methodist Church in the Philippines and around the world will be filled with exciting possibilities as we fulfill the mission of Christ in this broken world.”

The central conference’s delegates, an equal number of United Methodist clergy and laity from the country’s three episcopal areas, elected Estrella. The assignments of bishops in the Philippines Central Conference were announced during the consecration service on Nov. 26. Estrella will lead the Manila Episcopal Area.

Bishops in the Philippines serve four-year terms before they face reelection or retirement.

The National United Women's Society of Christian Service, Commission on Deaconess Service and National United Methodist Clergywomen Association endorsed Estrella, noting her role in being a champion for women.

“I hope I will be able to do more for the women and youth of our church now that I'm a bishop.  They have been passionately serving God and the church with all that they have, but oftentimes, these were not fully recognized by the church,” she said.

Estrella was baptized and nurtured at Tangos United Methodist Church in Navotas City. She is the second of four daughters of the late Elmer Eugenio and late Leonarda Manucom Estrella.

She graduated with a Bachelor of Accountancy degree at Polytechnic University of the Philippines and passed the licensure examinations for Certified Public Accountants in 1986. She worked as junior auditor in a group of companies in Makati, but the dream job failed to bring her joy, she said. She left the role and volunteered as church secretary at Tangos United Methodist Church until she heeded God’s call to the ordained ministry in 1987.

In The United Methodist Church, bishops are ordained elders who are called to “lead and oversee the spiritual and temporal affairs of The United Methodist Church.” Bishops, in consultation with district superintendents, are responsible for appointing clergy. They also preside at annual conferences, jurisdictional conferences and General Conference, the denomination’s top lawmaking assembly.

She and other new bishops are coming aboard as the denomination deals with the continuing fallout of the COVID-19 pandemic and rising congregational disaffiliations amid a denominational splintering.

Estrella said that the people called United Methodists will always be “stronger together as we remain in Christ and live out Christ's redeeming and transforming love wherever we are.

“We will trust the Holy Spirit to empower us to become instruments of peace, hope and justice in this broken world. God is with us every step of the way.”

Mangiduyos is a UM News correspondent in the Philippines.