During a mission journey to Nicaragua in 2009, James Barnett sat with a stranger in a city dump. Suddenly, he heard the words that upended his life and reshaped his future.

“The Lord wants you to know you aren’t being obedient.”

The team had been spending time with poverty-stricken Nicaraguans, such as the people who picked through trash as they tried to find enough to keep their families alive.

Barnett had enthusiastically accepted a local woman’s request to pray with him. But he wasn’t as enthusiastic about her message to him afterward.

“I was shocked and then angry that she said this to me,” he recalled. “Not obedient? I’m on a mission trip! What about me isn’t being obedient?”

But as he flew back to Florida, he read Isaiah 58. With fresh eyes, he saw God’s call to “share your food with the hungry” and “provide the poor wanderer with shelter.” For weeks afterward, James prayed and pored over Bible passages and Christian-themed books about alleviating poverty — feeling, indeed, a certain “dissonance” inside himself. 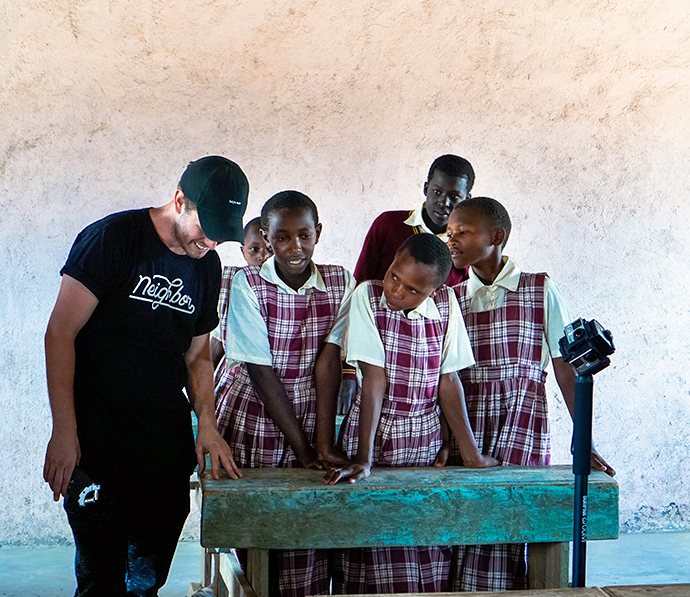 James Barnett (left) works with students from Ndibai Primary School in Kenya to create a video for the ministry’s donors, who helped fund the students’ uniforms. Photo courtesy of Kristin Barnett.

Barnett had grown up in a Christian home in Tallahassee, Florida. The pastors at his United Methodist church had encouraged and motivated him to be a leader among his peers. After graduating from high school, he moved onto the local Florida State University campus, where he got a degree in art and design. After graduation, he landed a job in the health care finance sector at a major nationwide company.

“I was making gobs of money,” he admitted. “I thought this was what ‘living the American dream’ meant.” Believing that accumulating wealth and following Christ could coincide perfectly, he also felt he was on the right spiritual track and anticipated exciting future successes.

Then that conversation in a Nicaraguan dump opened his eyes to new ways of understanding Christian mission.

“What I read flipped the script for me,” he said. “I believed that I was a Christian because I tried to look unlike the world, but I was not focusing on looking like Christ. Fundamentally, I knew Christians were saved from something, but I didn’t know they were saved for something.”

Eventually, Barnett realized that Christians are cultivators of social justice and it’s their responsibility to create the highest quality of life for all people.

At age 24, Barnett decided to leave his lucrative job. He began to seek out and care for homeless people in Tallahassee, distributing donated shoes and clothes to people who congregated at a nearby lake.

“I wanted to build relationships and get to know ‘image-bearers’: people whom Jesus loves,” he said. “The overall goal was to subscribe to a definition of ‘Christian’ that imitates Christ.”

He bought a van and began traveling across the country, often parking near camps of homeless people and sleeping in tents or in the woods to immerse himself fully in how others experience homelessness. He formed a nonprofit called “Clothe Your Neighbor,” using his graphics background to design shirts he sold online to meet the needs he saw around him. Although his parents were concerned about some of their son’s choices, they supported his efforts by shipping shirts from their home and providing other help for his work.

From January 2010 through December 2011, Barnett lived with homeless people in a variety of cities, including Baltimore, Atlanta and Rochester, New York. “I’d go to a city, get out of the van and figure out where the homeless stayed,” he said.

He talked with countless individuals, asking about their lives. “Every person had a different story of why they had become homeless. I began to see that there are as many reasons for someone to be homeless as there are homeless people.”

Barnett began speaking in churches about the lessons God was teaching him. On a subsequent speaking engagement at Florida State University’s Wesley Foundation, he met Kristin, his future wife.

“I was getting my master’s in international affairs and had every intention of going into the Peace Corps,” she said. “But someone told me an ‘eccentric’ guy who lived with the homeless was speaking on campus, which fascinated me.”

Friends introduced them after he spoke, and they began spending time together.

“I had been focused on a career track,” Kristin Barnett explained. “I wanted to go into poverty alleviation, but not from a biblical perspective.”

Slowly, she changed her attitude, not just to be a humanitarian for the sake of bettering the world, but also to follow Christ’s call to live incarnationally.

She cites her love for 1 John 3:17: “If anyone has material possessions and sees a brother or sister in need but has no pity on them, how can the love of God be in that person?”

Married in November 2013, the couple began working together to tackle issues of poverty and homelessness as part of their Christian mission.

Today, they have two children, are foster parents and serve full time at Neighborly, a renamed version of the nonprofit organization James founded.

Although helping the homeless is still a big part of the organization, according to James Barnett, “the goal for Neighborly is biblical justice and relationship-based poverty relief through restorative justice both across the street and across the sea.” Through Neighborly, the Barnetts “deinstitutionalize charity” by putting would-be donors into closer contact with people who need help to overcome disadvantages.

One Tallahassee initiative, Feed Your Neighbor, has provided more than 6,300 meals to day laborers, including many who are homeless. Welcome Your Neighbor, another initiative, helps Tallahassee residents forge meaningful relationships with recently arrived refugees from Afghanistan, Syria and Congo. Neighborly participants practice English with newcomers, throw birthday parties for them, welcome them with signs at the airport and help bridge cultural gaps.

Internationally, Neighborly has helped over 13,000 schoolchildren in six countries to acquire school uniforms. Uniforms often make the difference between attending school and obtaining an education or continuing the cycle of poverty.

“We’re simply trying to live out Philippians 2:5-8 in the way we understand it,” James Barnett said. “Jesus got close enough to be touched by those at a disadvantage, and we want to be like Jesus.”

Stanton is the missions director at Killearn United Methodist Church in Tallahassee, Florida. The author of an award-winning book, "Out of the Shadow of 9/11," she has written more than 30 articles on the subject.

Taking an example from how director George Lucas’ vision helped revolutionize the film industry, the Rev. D.G. Hollums asks whether a pending split is an opportunity to reimagine the denomination.
Mission and Ministry

The Rev. Collins Etchi Ako spells out some of the hardships he is up against in his work in Africa.