Ebola trial vaccines that were first administered in February 2015 have been declared safe and could soon be ready for use to prevent the spread of Ebola in any new outbreak of the deadly virus.

Dr. Francis Kateh, a former administrator at Ganta United Methodist Hospital who participated in the trial, declared that the vaccines are safe. “The vaccines are good — that is why I am here and well,” he said. He considers the Ebola vaccine trial the biggest contribution Liberia has made to the world in terms of health. 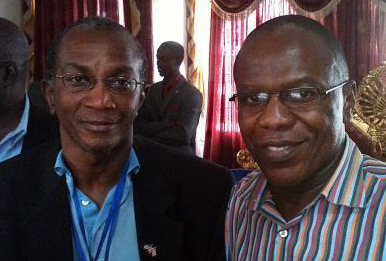 Dr. Stephen B. Kennedy (left) and Dr. Francis Kateh took an experimental Ebola vaccine before Liberia’s legislature to testify that the drugs are safe to use. Initiated in February of 2015, the Ebola Trial Vaccines are now ready for use as a tool of prevention in the event of another outbreak. Photo by Julu Swen, UMNS.

Dr. Stephen Kennedy, coordinator of Ebola research and co-investigator of the trial vaccine study, said the vaccines were scientifically proven to be safe and the trial was conducted in a transparent atmosphere. He feels the vaccines can now be used to combat the virus in terms of future outbreaks.

“The role of Liberia in the trial process was to ensure that a vaccine was created for global use,” Kennedy said. He pointed out that, medically, Liberia was the first country where a vaccine trial was conducted during the epidemic itself.

According to Kennedy, the vaccines are now awaiting licensing by the U.S. Food and Drug Administration before they can be used in combating the Ebola virus throughout the world. He further said that Liberia has been given a special opportunity to use the vaccine in case there is an Ebola outbreak in the future.

“The vaccines have increased the immune system of those who participated in the trial process,” Kennedy confirmed.

Though the Ebola vaccines trial ended with a success, planners and health authorities are now observing about 1,500 participants for another year while they wait for all of the protocols that will lead to the licensing of the vaccines.

“We all are feeling fine and healthy as far as I know,” Kennedy said. The health authorities also indicated that the emerging health complications that Ebola survivors are facing have nothing to do with the vaccines.