After spending three weeks traveling around Congo to raise awareness and train health care workers about the spread of Ebola, Megan Klingler with the United Methodist Board of Global Ministries’ Global Health unit said she is pleased with the progress made.

The Montana nurse traveled to six cities to reinforce awareness about how to prevent the spread of Ebola. United Methodist health care providers, church leaders and members were among those who attended the training sessions.

“I had a wonderful experience in the East Congo Episcopal Area and didn’t want to leave. I was overwhelmed by the welcome and kindness the delegation received at each site and Bishop (Gabriel Yemba) Unda’s tremendous support of our team’s work,” she said.

“The pre- and post-tests demonstrated that not only did we complete the trainings, but that participants understood and gained knowledge.”

According to the World Health Organization, more than 2,100 people have died since the Ebola outbreak began in Congo more than a year ago. There have been over 3,000 confirmed cases of the virus, with 56% of those women, 28% children under age 18, and 5% health workers, according to the Congolese Ministry of Public Health.

Dr. Lushima Damas, general coordinator of health for the church in East Congo, said the church and its awareness efforts have contributed to a decline in the number of new Ebola cases in recent weeks.

“The number of reported cases of Ebola Virus Disease has been steadily declining in recent weeks, with 14 new confirmed cases reported in the provinces of North Kivu and Ituri during the epidemiological week from Sept. 30 to Oct. 10. At the peak of transmission in April 2019, there were 126 cases per week,” he said.

“This decline in the number of cases should be interpreted with caution as operational and safety issues in some health zones make case detection and response difficult.”

Klingler conducted training in Goma, Beni, Bukavu, Uvira and Kisangani during her visit.

Dr. Frederic Yemba, supervisor of the Imagine No Malaria initiative in East Congo, said that Klingler had time to meet health care workers at United Methodist hospitals, as well as lay leaders and clergy from other denominations in East Congo.

At most of the training sessions, participants talked about the need for the church to help equip schools and churches with handwashing kits and temperature sampling devices to help stop the spread of Ebola from villages to cities.

The Rev. Mathe Ezechiel, district superintendent in Bukavu, said he was grateful to Global Health and Klingler for their efforts. He urged everyone to remain vigilant.

“Do not sit back, because Ebola is still with us and the public health risks associated with the continued spread remain very high.”

Congo also is facing cholera and measles outbreaks causing deaths in the cities of Goma, Bukavu and Uvira. This week, the Ministry of Health declared a cholera epidemic in Maniema with 40 new cases. More than 50 people have died from the waterborne disease in North and South Kivu since July, according to the ministry.

Dr. Marie Claire Manafundu, program officer of the Maternal and Child Health Program in Eastern Congo and wife of Bishop Unda, said she was pleased that Klingler was able to visit with children, many of whom suffer from malnutrition, during her time in the country.

“Megan has felt with her own fingers the daily growth of malnourished children in the region,” she said.

Manafundu said she is advocating for a change of strategies on the care of malnourished children by helping families with a food ration. She said children who are supported by the church at church hospitals often relapse once they return home.

Klingler agreed that more needed to be done.

“The malnourished children in Kisangani and Bukavu deeply touched my heart and I have taken the stories and pictures with me back to Atlanta,” Klingler said. “(The people) at Global Ministries are very concerned about the children in East Congo, particularly those with too little to eat,” she said. 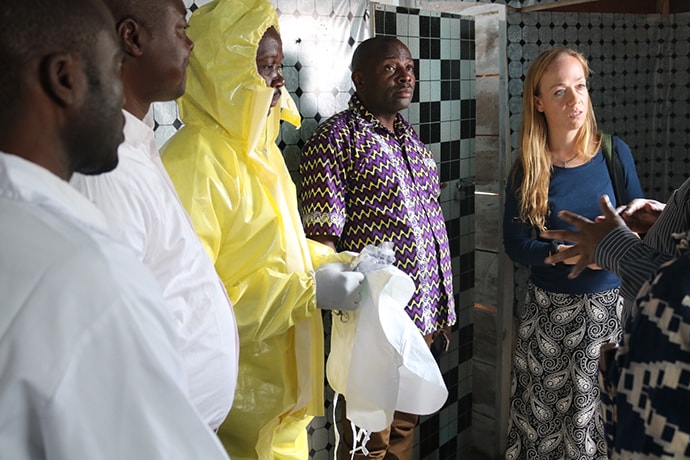 Megan Klingler hears how Majengo Health Center in Goma, Congo, isolates suspected Ebola cases that arrive at the United Methodist hospital. There have been more than 3,000 confirmed cases of Ebola since the outbreak was declared Aug. 1, 2018. Photo by  Philippe Kituka Lolonga, UM News.

Klingler said the agency has plans to award a third grant to the East Congo Health Board for Maternal Newborn and Child Health Services at six United Methodist health facilities.

Lushima said following the recent training, the church’s health board in East Congo is ready to train others to help prevent Ebola. He said there is a need to strengthen the community monitoring system in United Methodist health structures to control and guide patients during epidemics.

The Rev. Caleb Kanyimb Mbaz, disaster management coordinator for the South Congo Episcopal Area (a program supported by the United Methodist Committee on Relief), participated in the training led by Klingler and said he found it beneficial.

He noted some of the things he learned, including the eight stages of hand-washing, proper protection for health care workers and precautionary measures for pastors and church leaders, including avoid laying hands on people who are sick, especially those with a fever.

The training provided adequate knowledge, he said, to help his area block the path of Ebola to other regions. “As long as movements of the populations will persist, the opportunities (for the virus to spread) will also be present,” he said.

Mbaz thanked Unda and South Congo Area Bishop Kasap Owan for the technical support they provided to allow Klingler and her team to move safely around the country.

Unda said he was grateful to the Global Health unit for sending Klingler to East Congo to increase awareness about the prevention of Ebola through training.

The bishop recently traveled more than 1,200 miles to sensitize the authorities of the Maniema Province on prevention and to preach the Word of God. Because Ebola often starts in remote villages, he said, it was an important trip for him to make, even as it meant he had to miss the Africa College of Bishops meeting in Harare, Zimbabwe, last month.

“I ask all superintendents and pastors throughout the region to conduct this outreach while evangelizing others because there are those who continue to resist this disease,” he said.

After Klingler’s training, she received the name “Ketshi,” which means “a person who has the pity” in Tetela.

“I love my name, especially in the fact it was given to me by the honorable Bishop Unda and his wife, Dr. Marie Claire. I feel the name fits me; my heart was with East Congo even before it was determined that I would be coming.

“Several days before Bishop Unda requested assistance from Global Ministries, I had asked the Global Health unit to please allow me to take a leave of absence to work with Ebola in East Congo as my heart could not take being here in the USA anymore when I had the training and skills to help,” she said. “God heard my heart and opened the door.”