The East Africa Annual (regional) Conference treasurer has issued a response to the suspension of church funds to the conference after unfavorable audits.

His response came more than a week after The United Methodist Church's finance agency took the unprecedented step of setting a lower salary for the conference's bishop until satisfactory accounting is provided.

Charles Bamutya, the treasurer, responded to audits by the Board of Global Ministries by saying, "I wonder where they are getting such information when they have not even revisited the audit."

Bamutya called the specifics "blanket statements" and said it was not fair for the auditors to rule on the financial procedures of the East Africa Conference.

"There is nothing lacking because we have always provided receipts and all necessary documents for the last three audits in question," he said.

The Book of Discipline, the denomination's law book, requires "to cooperate with the General Council on Finance and Administration &ellipsis in promoting and standardizing the financial recording and reporting systems in the local churches of the conference." The church law book also authorizes a certified public accountant to audit the accounts of a conference treasurer for the preceding fiscal year and to receive, review and report such audit to the annual conference.

The last of three audits by the United Methodist Board of Global Ministries, conducted June 18 to June 30, 2012, stated, "The financial procedures, record keeping, and internal controls as practiced by the East Africa Annual Conference Office were found to be lacking in virtually every area." 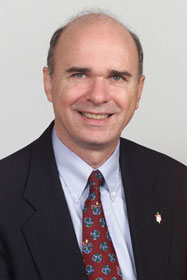 Bamutya disputes each of the audit findings reported in a recent United Methodist News Service article.

Bishop Peter Weaver, chair of the Board of Global Ministries independent audit committee, said his committee is "working directly with the East Africa Annual Conference to reconcile the audit and work through the audit recommendations."

Weaver said the committee was "surprised" that the responses from Bamutya that were posted on the East Africa Conference website were "different than what has been received by the audit committee."

He added, "We hope that this will lead to receiving a comprehensive response within the audit process. To keep with the integrity of the audit process in these complex matters, the Global Ministries audit committee will continue to seek resolution directly with the East Africa Annual Conference on the outstanding issues. If and when resolution is achieved, as we all pray it will be, the church and press will be informed."

In August, the mission agency suspended funding through the Advance, the denomination's designated-giving program, to the East Africa Conference. The move followed the recommendation of the agency's independent audit committee. The audits began in April 2011.

On Sept. 27, the board of the General Council on Finance and Administration, the denomination's finance agency, advised all United Methodist bodies to withhold funds from the East Africa Conference office until the resolution of the auditing issues and said it was filing a formal complaint against Wandabula. On Dec. 1, the finance agency announced it would set Wandabula's salary at $1,000 a month in 2013 until the conference provides a satisfactory accounting of how its money is spent.

Wandabula in an October email blamed the actions of the denomination's mission and finance agencies on a campaign "of malice, mudslinging, character lynching and insurrection." He contended the agencies were siding with a blackmail attempt by an anonymous emailer who used the name "Journey Jonah."

Indiana Area Bishop Michael J. Coyner, president of the finance agency's board, disputed Wandabula's assertion. He told United Methodist News Service that the finance agency's Audit and Review Committee "studied the situation very thoroughly and made their recommendations on the basis of finances not on the basis of any internal politics of the (East Africa Conference)."

Since October, Wandabula has requested United Methodist News Service to email him questions, but he has not responded to emailed requests for comment on his office's response to the audits. 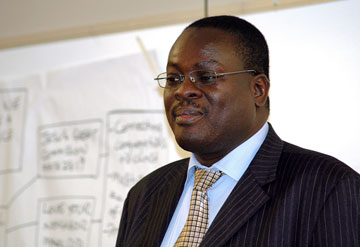 In a separate situation, the Western Pennsylvania Annual Conference earlier had asked the United Methodist Judicial Council - the denomination's top court - to review whether funds given to the East Africa Conference were used in accordance with the intent of the donors as required by the 2008 Book of Discipline (Paragraph 258.4).The Western Pennsylvania Conference also asked the council to review the manner in which the Africa Central Conference College of Bishops handled complaints against the bishop.

During a Judicial Council hearing in October, Wandabula defended his actions and provided Judicial Council members with documents related to a church-building project that involved the Pittsburgh East District in Western Pennsylvania.

The Judicial Council deferred a decision on the Western Pennsylvania request until its spring session in April.

After the hearing, Wandabula declined to answer questions from the United Methodist News Service. "As for the questions, let us give the Judicial Council time to follow up with their work," he said.

Bamutya's comments are the first responses from the East Africa Conference that the news service has received since the finance agency announced it was lowering the bishop's salary.

He refuted each of the findings reported.

Bamutya referred to the items listed in the recent news service article as being inconsistent. For example, he said, the figure of $699,409 for Humble School does not match his records. He added that it was a mistake that Board of Global Ministries auditors have continued to make whenever they publish their reports.

On the salaries of the teachers, he said that the delay of salary payment was a result of Global Ministries' decision to put funds on hold. It is now more than one year since the Board of Global Ministries put the donations to Humble School on hold in October 2011.

The mission agency's June 2012 audit reported that teachers had told auditors that delays in payments had "been the norm as far back as 2009."

The audit also said Humble School secondary's ledger shows $84,464 was sent to the secondary schools, but there were no receipts for these payments.

However, Bamutya said a detailed file with bank slips was given to the auditors. He said he wondered why the auditors came up with such a conclusion. He noted, "Perhaps they got confused with the education system of Uganda," where bank slips are used - not receipts as the auditors stated.

A total of $253,665 was sent for the Hope for Africa Children's Choir in Uganda, but a majority of expenses could not be verified, the audit said.

The expenses of money sent to Hope for Africa Children's Choir is said to have been incurred on the recruiting exercises, which included transport, dressing, training, food, electricity, CDs and DVDs, Bamutya said, and all records are within the Humble School books. However, he said a separate financial book is now in place and ready for verification.

A total of $24,796 was given for an HIV/AIDs awareness program, but "there were no details of workshops held, attendance, or what expenses were incurred," the audit said. "On inquiring from the conference treasurer, he said he could not remember where he kept the information relating to the workshop."

Bamutya responded that the auditors chose to ignore the report on the activities of trainings, sensitization and counseling carried out in five villages of Nasuuti, Wanyange, Waitambogwe, Namunkanaga and Bulumba.

About $94,000 was donated for the construction of Trinity United Methodist Church in Wanyange, Uganda, but there is no sales agreement for the land and no title deed is available, the audit said. There is no accounting for $73,214 of that total, the audit said.

Accountability of $73,214 is unrealistic, according to the conference treasurer. He said this money went to purchase local materials such as sand, aggregate and bricks, and the suppliers could not afford receipts given their lifestyle. The file for Trinity United Methodist Church is said to have been available at the time of audit. The United Methodist Church is processing the land title, Bamutya said. 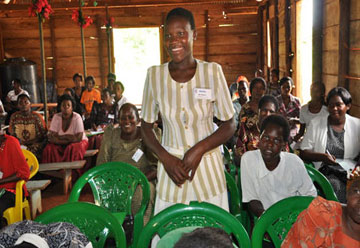 The United Methodist Women Centre in Jinja, Uganda, received $6,000. There was documentation for payment of stipends to teachers, and money for purchases were viewed at the conference office, but no financial record was found on site, the audit said.

A total of $13,165 was given to the United Methodist Empowerment Centre to provide vocational training and spiritual formation for rural famers, but there was no financial record, the audit also said.

"The Bishop (Wandabula) stated that records could be easily accessed from the Conference Treasurer," the audit said. "Although this was requested each time, again no records were made available."

However, Bamutya said the money received for projects like United Methodist Women Centre in Jinja and training for rural farmers was used evenly, and all the information was provided to the auditors.

Bamutya, who is the sole beneficiary of the grant, said he used the money for accommodation, communication, Internet, transport, meals and resource materials. He said accountability for all expenses is in place, and auditors are aware.

A total of $15,312 was given for livestock at a farm. The farm grew maize and sugarcane but contained no livestock, the audit said.

Bamutya said 40 acres of land was hired for five years to grow sugarcane, and livestock was bought and distributed among Christians, including the women's group at Kopanga Health Centre in Migori, Kenya.

A grant of $6,200 was provided to buy motorcycles for 40 district superintendents, but only $200 could be documented, the audit said.

"Sixty-two hundred dollars cannot buy 40 motorcycles even though we changed it to buying bicycles," Bamutya said. The beneficiaries from the money designated for motorcycles are two pastors from the Budaka and Magamaga districts, the treasurer said.

Bamutya said the budget for 40 district superintendents is a reflection of the Advance number, not the money so far received. The registry for conference property has been established, and logbooks are in the office, he said.

A total of $5,309 was released to Wandabula for the Rwanda Advance, although the voucher says the money was paid to Joe Muhakarize, the audit said.

On the money sent to the bishop for the Rwanda Advance, Bamutya said the bishop was the transit, but the money reached the beneficiary.

Bamutya did not provide any documents to United Methodist News Service to support his assertions.