Many Korean churches have a minister take charge of young adult ministry because they are young — regardless of their talents, grace and gifts.

However, not all young ministers have the passion for young adult ministry.

Even if they have such gifts, their ability and capability can often be limited because most are seminarians who must also focus on their studies.

In addition, the interval of their ministry in a church is relatively short. After completing studies or being ordained, they often get an appointment to a new church and leave. A new part-time minister follows and begins the young adult ministry from square one.

These circumstances pose a challenge for the young adult ministry of Korean churches.

However, First Korean United Methodist Church in Wheeling, Illinois, tried something different. Rather than hiring another paid staff for its young adult ministry, the church entrusted it to a devoted and committed volunteer layperson with a calling and vision. 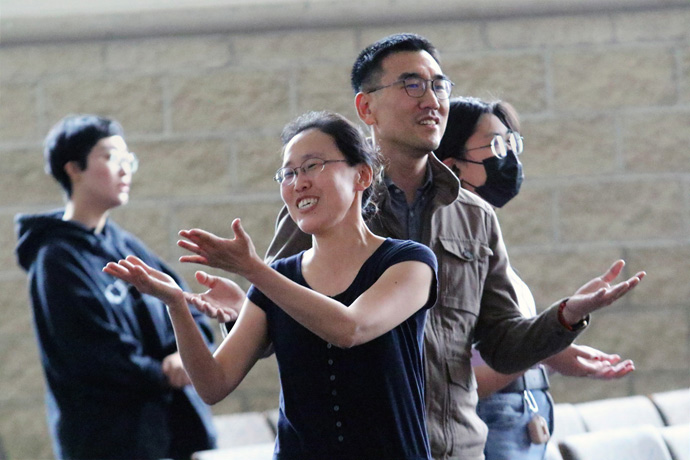 Attendees of the June 13 young adult worship service at First Korean United Methodist Church in Wheeling, Ill., bless each other during a time of praise. Photo by the Rev. Thomas Kim, UM News.

Since its founding in September 1923 as the first Korean church in the North Central region of the U.S., the church served as a spiritual center for the Korean immigrant community. But recently, the church has stagnated. In comparison, however, the young adult ministry has seen a revival, growing more than ever before.

In this church, too, the young adult group was repeatedly disbanded and dismantled, and the continuity of the ministry had been lost.

The life of the young adult ministry was in danger in 2015 with membership shrinking to one.

Church member Jinho Woo thought the young adult ministry would not continue if the church depended on a pastor, so he began to participate actively in the ministry in September 2016.

He made a promise before starting: “I will keep the First Korean UMC's young adult ministry till it lasts.”

Even though he was busy with his own business, Woo set a goal to use the year 2016 to find lost sheep, making time for one-on-one contact with young adults and college students who had left the church. And as he treated them with his own money at a restaurant, Woo began to listen to figure out their voices and needs.

“My role was to witness to my faith to young adults, listen to their spiritual concerns, and buy their meals,” he said.

In Korean culture, according to Woo, buying a meal means more than just paying for one meal for them, and eating together is an expression of interest and a stepping stone for forming relationships and communicating.

Woo attributed the growth and revitalization of the ministry to the dedication and effort of Ha-Yan Song, the only member left in the young adult group in 2015.

“When all my sisters and brothers in Christ left the church, I kept the young adult group by myself and prayed in tears,” Song said. 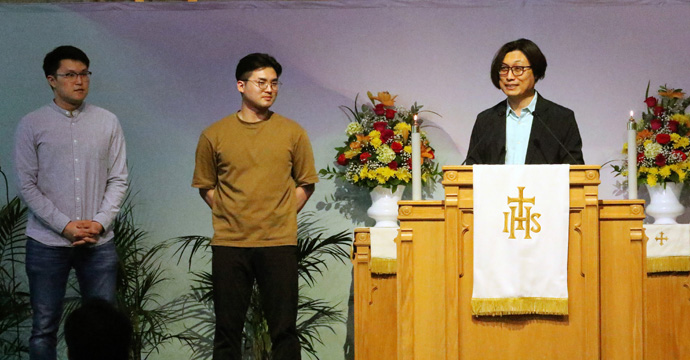 During a young adult worship service at First Korean United Methodist Church in Wheeling, Ill., on June 13, Jinho Woo introduces two young members who are moving to other areas for jobs or schools. They were encouraged to serve Christ in their new places. Photo by the Rev. Thomas Kim, UM News.

In September 2016, Woo met Song at a coffee shop in downtown Chicago, asked for her wish list for the young adult group, and promised to do it. The wish list included making young adult group T-shirts and having a retreat and Bible study. Everything came true within 18 months.

The young adult group resumed with its own worship service, a prayer meeting and a Bible study with Song, Woo and his wife, Seungyun.

Song began inviting her friends who were thirsty and hungry spiritually but had no opportunity to be fed.

The young adult ministry started to change and grow in 2017.

All the leaders of the group agree that the keys to the revitalization and growth of the church’s young adult ministry are the devoted lay leaders, their leadership and discipleship training.

Song said that the driving force for its growth was the small group discipleship class where they were led to a Christlike life and felt the love of Christ in their fellowship.

Song also mentioned the importance of the “Ride Ministry” for members’ fellowship and Christian living.

Since many in the young adult group who go to school in downtown Chicago and the suburbs don't have cars, she said that they share their faith with coffee in the church van.

Ah-Hae Song, one of the leaders of the group, was one of the spiritually thirsty young adults before she attended the church.

“Since I joined the FKUMC, my spiritual hunger was satisfied through the Bible study, prayer meetings and fellowship to share Christian life regularly,” she said.

Ah-Hae Song said a regular retreat was another important ministry for her spiritual growth.

“I had time to look into the roots of my bitterness, which were caused by the thorn and wounds in me, at the retreat I attended [for the] first time in 2020, and I was able to heal my wounds and restore relationships with God and friends,” she said.

The young adult group of First Korean United Methodist Church is no longer made up of just one young adult member. Now, 50-60 worship together every Sunday. About 20 people leave the group for other regions of the U.S. every year for their work or schools, and they welcome about 30 young ones and baptize three or four annually.

Woo stressed the significance of the small group ministry.

“The Word must permeate into our lives but does not because people only accumulate knowledge of the Bible, which means the church has no power,” he said. “Most class meetings of existing churches have become social gatherings without any accountability or responsibility to each other.

“Our small group ministry is to restore the class and band meetings that (Methodism founder) John Wesley did, and one of the bold goals of the young adult ministry is to make 100 Disciples of Christ to transform Chicagoland and the world.”

Ha-Yan Song, now as a young adult ministry helper, recommends for people not to lose their holy calling.

“Do not lose the soul of your coworker by following worldly methods to do things well,” she said. “The world is interested in what the true church and Christians look like. Do not give up on the purpose God is pleased with. What young people wonder about is not of the world, but of Christ.”

Rep. Delia Ramírez Hernández (D-Ill.) was sworn into the 118th U.S. Congress on Jan. 7. She grew up attending Humboldt Park United Methodist Church in Chicago and has been a leader in the denomination.
Mission and Ministry