Weeks after Cyclone Kenneth roared through northern Mozambique, killing 38 and causing massive flooding, survivors are struggling to rise up from the rubble.

Pemba, the capital of the Cabo Delgado province, was among the hardest-hit areas.

“Many families (who depend solely on agriculture) have seen their fields and crops destroyed. There is a lot of cattle, goats and pigs that went with the force of the waters,” said the Rev. Dércia Marrengula, the district superintendent who oversees The United Methodist Church’s work in Cabo Delgado.

“People are desperate, but at all costs they are trying to get up from the rubble, hoping that one day they will see their lives return to normalcy.”

Cyclone Kenneth pounded the country six weeks after Cyclone Idai left a path of destruction in central Mozambique, Zimbabwe and Malawi. More than 800 died in that storm and hundreds are still missing.

According to a UNICEF report, 177,796 people have been displaced by the cyclones, including more than 73,000 in Mozambique.

Respeito Chirrinze, Mozambique Episcopal Area disaster management coordinator (a program supported by the United Methodist Committee on Relief), has been traveling to the affected areas to assess damage and needs.

She said Chirrinze has submitted a comprehensive relief grant proposal for Idai and will be working on a plan to address further needs in Cabo Delgado.

Chirrinze said most of the initial grant money in that area will be used for food.

“The issue of nutrition in some villages within the Cabo Delgado province is a major threat among the affected populations,” he said.

Timóteo Matsinhe, a United Methodist and civil engineer who works for a private company in Pemba, said much of the infrastructure in the city and its outskirts has been damaged.

“Roads, bridges, schools, hospitals and many other buildings have become partial or totally damaged,” he said.

Some villages and settlements are still isolated as access roads and communication channels have yet to be restored.

The Rev. Jacob Jenhuro, episcopal assistant for the Mozambique North Conference, said the past few weeks have been extremely difficult.

“We need to pray a lot, so that God’s people may find comfort, consolation, healing and provision,” he said.

“At this moment, there are many children (who are absent from) school,” he said, adding that those who do show up are left sitting under trees, making learning difficult.

United Methodist Nevacio Manuel, an accountant who works in Pemba, said a lack of water is making matters worse.

“At present, there are several areas without the precious liquid for drinking, cooking and personal hygiene,” he said.

“We have more than 60 cases of cholera outbreak already diagnosed. We do not know what will come out of this situation, because when there are disasters of this nature, diseases also follow suit. There is a need for health teams to redouble their efforts to address this situation,” he said.

According to the UNICEF report, there have been more than 6,700 cases of cholera in the country following the cyclones.

United Methodists from across the connection have rallied to help survivors of both storms.

According to the Rev. Filimão Vilanculo, director of administration and finance for the church in Mozambique, donations have filled the church’s headquarters in Maputo. The supplies are sorted and sent to the Mozambique Christian Council. The council then delivers them to the National Institute for Disaster Management for distribution.

The South Africa Conference also sent bundles of clothing and food for survivors.

“Congregations here in South Africa on hearing of the natural disaster that struck our brothers and sisters in Mozambique, decided to stretch their hands toward those in need in Mozambique,” said the Rev. Puleng Norah Maboee, Central District superintendent in Johannesburg. 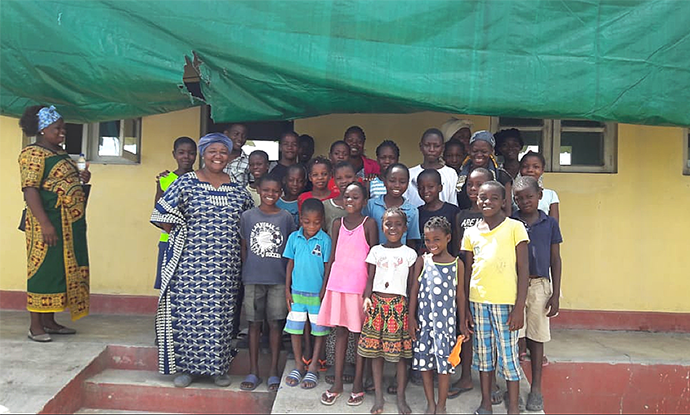 Bishop Joaquina Nhanala visits Dondo Orphanage in Beira, Mozambique, following Cyclone Idai. Photo by Eurico Gustavo.
On a visit to the affected areas in the Northern Conference, Bishop Nhanala said United Methodists will not let the disasters sink their spirit.

“We have spiritually mature members who will help each other and both will realize that God is with them even in difficult times like this,” she said.

“The fact that they are alive and hopeful, it is already a great motive to thank the Lord and the spiritual support they receive right now.”

Nhanala also visited Central Chapel United Methodist Church in Beira, which took the brunt of Cyclone Idai. She reassured the 250 members in attendance at Sunday worship that things will improve.

“Know that even in the face of this situation in which you encounter yourselves, the Lord has never forsaken you and will never forsake you. There are brothers and sisters in Mozambique and abroad who are praying for you and who are making material and financial support to help you,” she said.

Sambo is the Africa Lusophone correspondent for United Methodist News Service. Eurico Gustavo, communicator for the Mozambique North Conference, contributed to this report.

Church leaders and groups are reaching out to survivors after a deadly December storm killed more than 400, destroyed homes and damaged crops in the Philippines.
Social Concerns

United Methodist churches are dealing with death and devastation caused by the tornadoes that clobbered Kentucky, Tennessee and other states overnight on Dec. 10.