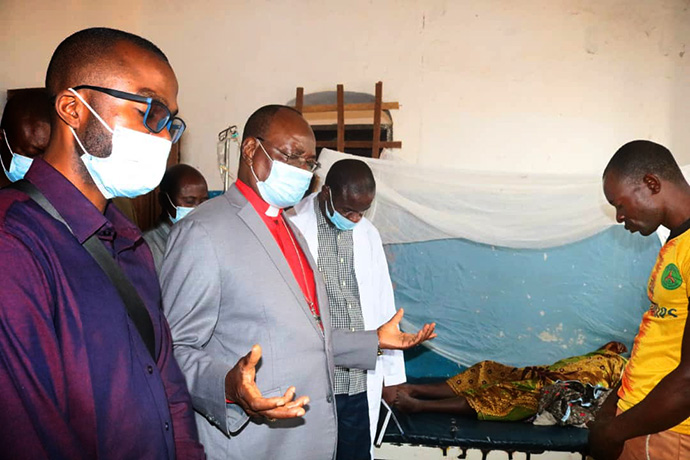 United Methodist Bishop Gabriel Yemba Unda prays for a sick person at Tunda General Hospital in Congo. The region is dealing with a monkeypox outbreak that has killed 28 people. Photo by Chadrack Londe, UM News.

On the heels of Ebola and meningitis epidemics and amid the COVID-19 pandemic, Congo health authorities are grappling with a new threat: monkeypox.

A new outbreak of monkeypox was declared in December in the village of Tunda in the Democratic Republic of Congo. A viral disease first identified in laboratory monkeys, it occurs mostly in central and western Africa.

Tunda is one of the ecclesiastical districts of the East Congo Conference where the first American missionaries settled in 1922.

Bishop Gabriel Yemba Unda, East Congo Episcopal Area, urged United Methodists and others to get involved in order to end the disease.

“The church will not sit back and watch this epidemic,” Unda said. “I ask for the involvement of all to help put an end to this epidemic that is raging in Tunda.” 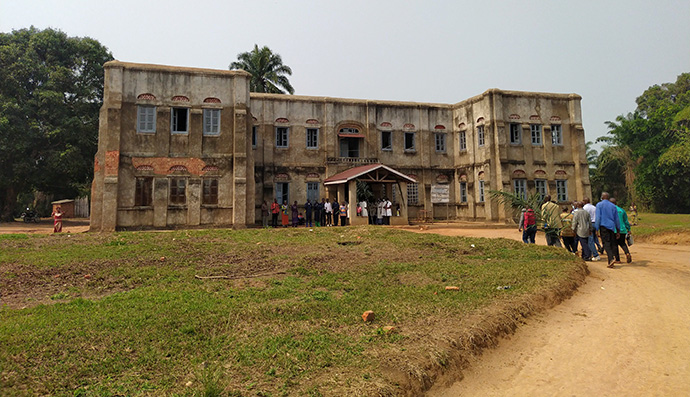 United Methodist Tunda General Hospital, the largest medical facility in the area, was established by The United Methodist Church. The hospital is helping raise awareness about a monkeypox outbreak in the region. Photo by Chadrack Londe, UM News.

According to the World Health Organization, the monkeypox virus causes an illness with symptoms similar to, but less severe than, smallpox. The incubation period for monkeypox is usually six to 13 days, but can range from five to 21 days.

To date, 269 cases have been recorded and 28 people have died. Dr. Kibungi Mutanga Jr., provincial minister of health, said there has been a regression of cases but warns of the rapid spread of the disease in other health zones located hundreds of kilometers away from Tunda.

“We are very happy because since the disease was identified, we are experiencing a decline in cases; the curve is falling,” Mutanga said. “The concern we have at this time is the rapid spread of the disease. (There have been) seven cases in the city of Kindu (and) four new cases in the territory of Kailo.”

Cases of monkeypox are common in the DRC. Chadrack Simba Kaluma, an epidemiologist at the Ministry of Public Health, told ACTUALITE.CD that “for the last three years, we have had cases of monkeypox in almost all provinces.”

In a national speech, DRC President Felix-Antoine Tshisekedi said, “In addition to the COVID-19 pandemic and the Ebola epidemic, our country has been severely affected by other health emergencies. This is particularly true of the meningitis epidemic in Tshopo Province and the monkeypox epidemic recently declared in Maniema.”

Dr. Damas Lushima, health coordinator for the church in East Congo, said the government and church are working together to take appropriate emergency measures.

So far, Lushima said, “the response is being carried out by the government of the republic, while the church is helping in the sensitization.”

Tunda Regional Hospital, the largest medical facility in the area, was established by The United Methodist Church. The United Methodist Board of Global Ministries invested nearly half a million dollars in the construction of the new Tunda hospital building. It is the nearest hospital within nearly 100 kilometers, Lushima said.

“Without this facility,” he explained, “100,000 people would no longer have access to health services.

“Our community outreach workers are hard at work sensitizing the local population,” he added. “We tell them that the monkeypox disease is transmitted from one person to another by physical contact. Hence, the importance of keeping physical distance and applying barrier measures and hygiene.”

Unda encouraged United Methodist faithful in the Tunda Ecclesiastical District to be cautious and to respect the barriers.

“We have known Ebola; the coronavirus is here, and now it is the monkeypox epidemic,” he said. “We must scrupulously observe the control measures as recommended by the health authorities.”

He asked laity and church leaders of the conference to relay this message to all United Methodist churches in the region, expressing faith that the new epidemic would be defeated.

“We have worked hard and celebrated the end of the Ebola virus disease,” Unda said. “Together, we will end this new epidemic by the grace of God.”

Londe is a communicator and editor in the Congo Central Conference.