The Greater New Jersey Conference got good reviews on its first virtual gathering, with some clergy and laity suggesting that online might be the way to go even when the pandemic is over.

But in the Virginia Conference, technical problems with voting forced Bishop Sharma Lewis to call off at noon a Sept. 19 virtual meeting that had been underway all morning with 2,200 voters. The conference will try again on October 31. 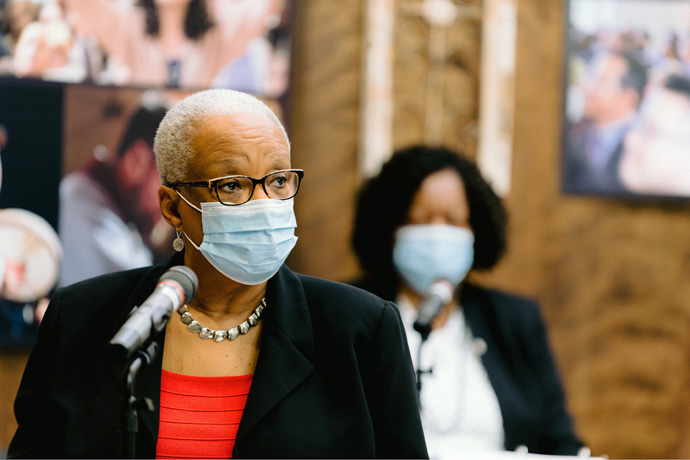 Just as churches had to scramble to go online or enhance their online presence because of meeting restrictions caused by COVID-19, nearly all  U.S. annual conferences have had to resort to virtual meetings for passing budgets and handling other essential business.

Approaches have varied. Experiences have too, with mixed feelings accompanying even successful sessions.

Bishop Bruce Ough has presided over 28 annual conferences, and he feels the two virtual conferences he led this year, in the Dakotas and Minnesota conferences, went quite well. Participant surveys have told him as much.

“However, the downside, which has also surfaced in the evaluations, is that folks clearly miss the physical connection and the community building that happens around the edges,” he said.

Annual conferences are the basic bodies of The United Methodist Church, as described in its constitution. But the term “annual conference” also refers to those groups’ yearly meetings, which include business sessions, clergy and laity sessions, ordination and commissioning services, memorial services and more.

In the U.S., annual conference sessions typically occur between May and July, but the pandemic forced church closings beginning in March, and postponements of annual conferences quickly followed. So did announcements that they would go virtual.

This year, such meetings have sprawled across the calendar, with the Great Plains Conference meeting on May 30, and the Kentucky Conference not scheduled to meet until Dec. 6-8.

Most conferences have limited their agendas and shortened their meetings. They’ve relied more on pre-recorded reports and music.

“A lot of the feedback we’ve had was about how seamlessly we were able to move from pre-recorded to live items,” Ough said.

Conferences have used a range of communication platforms, with Zoom Video Webinar a popular choice. Voting technologies have varied at least as much.

“The challenges are making sure that you allow space for the participation of the members so that everybody can ask their questions and have their voice heard,” Wood said.

While most online conferences have had a focal point, where the bishop is presiding and a livestream originates, the West Virginia Conference conducted its business session at 12 sites. Small groups of clergy and laity came to each, observing social distancing and watching a big screen.

Bishop Sandra Steiner Ball, wearing a face shield, was at the one where the live feed originated, and she could be seen on screen at the others; but in addition to her virtual leadership, each site had its own presider for local discussion and voting.

For clergy and laity to participate from their homes wouldn’t have worked universally in mountainous, largely rural West Virginia. 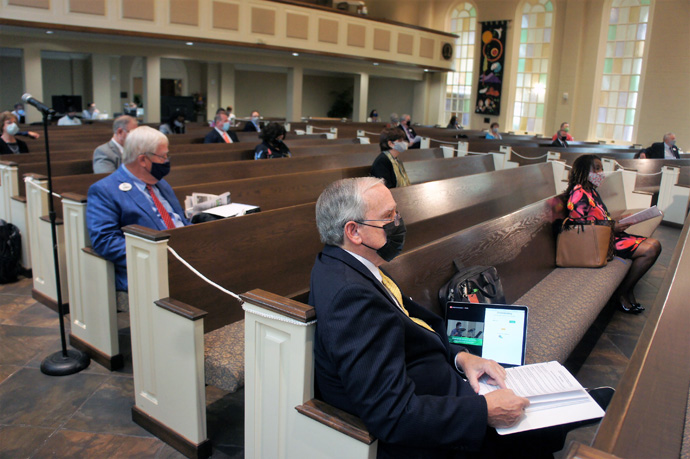 A smattering of clergy and laity meet at Germantown United Methodist Church, under pandemic protocols, for a Memphis Annual Conference session that hundreds of others attended online. Most U.S. annual conferences of The United Methodist Church had their yearly meetings virtually because of the COVID-19 threat. Photo by Lane Gardner Camp, courtesy of the Memphis Annual Conference.

“We have vast areas in the conference that have challenges with internet access,” said the Rev. Deborah Coble, communications director.

So far, the Virginia Conference has had the most conspicuous technological problems and has posted letters of apology from Lewis and the vendor responsible for the voting malfunctions. But Virginia has not been alone.

The Great Plains Conference in its May 30 meeting had a mass conference call where connection problems were initially bad enough to consider postponing, said Scott Brewer, treasurer and director of administrative services.

The Rio Texas Conference chose ElectionBuddy as its technology for secure online voting, and the system worked. But some participants did not get their voting credentials due to a not-fully-updated conference database of email addresses. So to include everyone the conference moved during the Oct. 3 meeting to Zoom polling, which Bishop Robert Schnase acknowledged was, under the circumstances, essentially an honor system.

Jozlin Parker, Rio Texas’ director of technical ministries, noted that all of the few votes taken had passing margins of at least 97 percent, and that the conference was able to compare registration and voting numbers to know “the honor system was working for this annual conference vote.”

The Upper New York Conference has outspoken critics of how it handled debate at its Oct. 3 virtual session.

“If I wanted to speak to anything I would have to call a phone number, input an access code, press a button to be transferred to the operator, talk to the operator to say I would like to speak in favor or against this measure or have a point of order, then the operator would put us in a queue for the bishop to call on us,” said Ian Urriola, a lay delegate.

Urriola noted that delays resulted in not everyone getting called on and that there were audio and closed-captioning issues. He has asked the denomination’s Judicial Council to rule on whether the meeting violated the Book of Discipline, which requires accessibility for people with disabilities    — in this case, people who are deaf or hard of hearing. 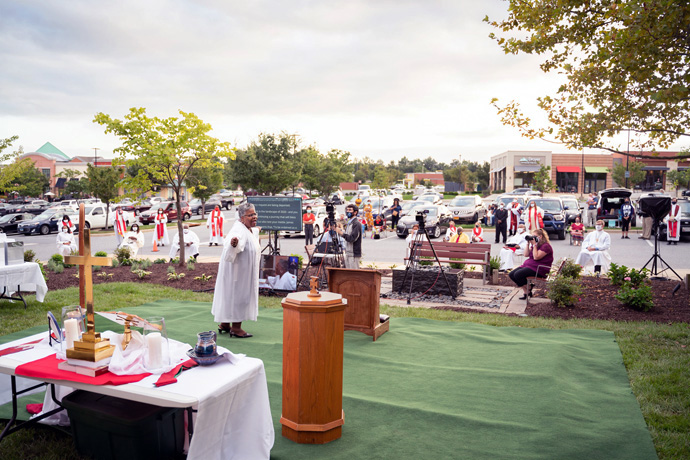 Meanwhile, Kevin Nelson, a home missioner who participated in the meeting, remains unhappy that the conference’s organizational motion did not allow legislation to be amended.

“If we can’t change the business that’s brought to us, we’ve sacrificed a core power of a deliberative body,” he said.

“Certainly it was a learning experience both for users and for people running the technology,” Hustedt said. “Overall, there were very few hiccups. That said, for the people experiencing hiccups I know it was frustrating.”

Plenty of participants around the connection reported positive experiences with virtual annual conferences.

“Everybody felt really good about it,” said the Rev. Bill Lawson, audio visual and technical consultant for the Memphis Conference, which had about 600 clergy and laity participating through Zoom and another 2,500 who streamed proceedings via Facebook or YouTube.

Lawson was enthusiastic about the website-based voting method used by his conference.

“It was even a lot better than the handheld voting devices we’d used before, and faster results,” he said.

Some United Methodists said they appreciated the time and cost savings of not having to travel to annual conference. Conferences saw their expenses drop, too.

Some conferences had a good enough experience to begin pointing toward post-pandemic virtual meetings.

“I expect the Dakotas and Minnesota, along with a lot of other annual conferences, in the U.S. will be looking at hybrid models or some alteration between a virtual annual conference one year and an in-person conference and teaching event the next,” Ough said.

There’s talk around the denomination about whether the virtual annual conferences could foreshadow a virtual 2021 General Conference, if a  vaccine has not been developed and distributed globally in time for that meeting in late August and early September of next year.

Ough and Wood are among those who think that even with language and time zone challenges, a virtual General Conference could be done.

“You’d have to do training in preparation,” Wood said. “I do think it’s completely possible.”

But if there’s a universal sentiment among United Methodists about meeting online, it’s that it’s not like being together.

“Most people liked the efficiency,” he said. “But everybody missed the personal connection.”