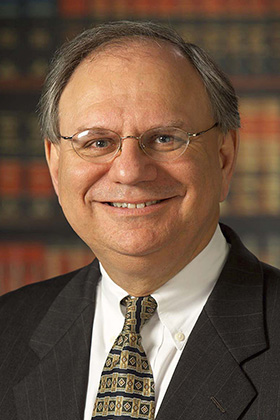 The Rev. Lovett H. Weems Jr.
Photo courtesy of Wesley Theological Seminary.
It is not surprising that United Methodists have little experience with congregations leaving the denomination. For the most part, the United Methodist pattern has been that people leave the same way they join: as individuals. They don't take the church with them. This practice comes from a historic and legal understanding that the property of United Methodist churches is held “in trust” for those who wish to worship as United Methodists in that community.

Mainline churches have differing polities, and those differences matter in what number of congregations leave. Past experience provides helpful insights.

1. The easier it is to leave, the more congregations will leave.


A researcher intimately acquainted with both the United Church of Christ and the Episcopal Church told me that “the easier you make it to leave, the more congregations will leave.” He cited the relative ease with which UCC churches can separate from their denomination compared to the more difficult process for Episcopal churches.

It should be hard for a congregation to withdraw from their denomination. The burden of proof should be on those seeking to leave and take a congregation with them. After all, those interested in leaving have many other options for themselves among churches and denominations that share their beliefs and values, including some Wesleyan traditions.

Congregations rarely consider such a major schism without the active promotion of someone — often, though not always— the pastor. Pastors, who themselves have multiple denominational options for their ministries, should have to reckon with the implications of such schismatic leadership for the legacy of a congregation that often spans generations of clergy and laity.

Moving too quickly to the option of leaving removes the needed impetus to stay with the struggle and undermines the historic, though inadequately lived out, goal of unity among Christians.


This is not the first time that United Methodism in the U.S. has faced schism. Looking back, we see there are not many instances in which we can take pride. Historians note that social and cultural factors often shaped divisions more so than the narrative of disunity focused on theology and social issues that was argued at the time.

There are also times when people might have left and did not. The establishment of the racially segregated Central Jurisdiction by the Methodist Church in 1939, without a single vote for the proposal from African-American delegates, left African-American congregations with every reason to leave. They did not. It is hard to imagine The United Methodist Church today without the contributions of those churches and the leaders they produced over the past decades.

A less noble example can be seen from the early days of my ministry in Mississippi in the 1960s as The United Methodist Church was forming. The new denomination would abolish the Central Jurisdiction despite continued opposition from many white southern leaders, particularly in my annual conference. Remember that this was also a time of much racial change and conflict within Mississippi that has been documented well. Tension and resentment ran high. It was not helped by clergy and laity who stoked the flames of schism through their recalcitrant rhetoric.

Were it not for the property trust clause, virtually every white United Methodist church in Mississippi would have left the denomination in the 1960s. This is not hyperbole. It is reality. I was there. Today those churches are among 1,000 churches led by an African-American bishop that contribute significantly to the rich diversity of United Methodism.

Think about all those laity who would have left with their congregations if their churches could have taken their property. Most of them would look back on those days with different feelings today as time has given them a better perspective than they had amid painful changes. They stayed with those with whom they differed long enough to figure out the issues together.

Some individuals left those churches, but most did not. They stayed and remained family despite a major family tussle. They could tolerate the fighting but did not want to break up the family. That's where most United Methodists are today, in my opinion. Almost every congregation has within it people with major differences not only on sexuality issues but on a range of other topics. Vital congregations have learned to navigate these differences, in most cases, with sensitivity and integrity. The last thing they need is to be forced into decisions to disrupt their congregational life because denominational leaders, sometimes including their pastors, cannot show the same generosity of spirit.

3. A time for humility, grace, and remembering what's important.


If any era should lead United Methodists to embrace a humble spirit and to show grace toward others within the denominational family, it is the last 50 years. Many of us have forgotten our reason for being. We have forgotten we are called into a passion for scriptural holiness and reform of the nation. John Wesley's “essentials” were never so expansive as some would make them today. He always feared that secondary things would overshadow his abiding passion that all come to know the love of God revealed in Jesus Christ.

The threat for The United Methodist Church is not primarily in losing members. All churches and denominations lose members. What determines if a denomination expands its witness to more people rests primarily with what United Methodists are doing so badly today — reaching new disciples for Jesus Christ. We are distracted by so many things that we have forgotten the “one thing that is needful,” as Jesus said to Martha in her moment of anxiety.

Weems is senior consultant at the Lewis Center for Church Leadership of Wesley Theological Seminary, where he is also distinguished professor of church leadership.

Four Chaplains Day commemorates the events of Feb. 3, 1943, when the USAT Dorchester sank during World War II. Four military chaplains, including the Methodist Lt. George L. Fox, gave their own life vests to others and went down with the ship.
Social Concerns