Twenty-four years after the disastrous civil genocide of 1994 that annihilated an estimated 800,000 to 1 million citizens, United Methodists in the new Rwanda Provisional Conference are committed to a holistic Gospel of restoration and reconciliation.

What the church members — who primarily serve an impoverished rural community — lack in financial resources, they make up for in abundant vision, hope, and a willingness to address societal challenges facing their mission and ministry.

“United Methodists cannot change what happened in Rwanda’s past,” says the Rev. Marc Baliyanga, dean and legal representative of the Rwanda Provisional Conference, “but we can help shape a better future.”

A recent government edict closed thousands of churches and mosques, including United Methodist congregations, across the nation because their facilities were deemed physically unsafe, lacked proper sanitary conditions and/or had inappropriate parking situations.

Lacking monetary help from the global United Methodist denomination, due to financial restrictions imposed since 2012 audit discrepancies in nearby Uganda, Rwandans are working slowly to upgrade their facilities to meet the new standards.

“It grieves us to close our worshipping congregations,” Baliyanga said, “but our people are struggling to find funds to meet the unexpected new standards.”

One small closed facility that lacks adequate parking has been transformed into the new Kigali Wesley Bible College. Thirty students, five of whom are women, have committed to a two-year certificate training program in Bible and theology. Instead of a weekly worship center, the building has become a one-room classroom, dormitory, library and eating hall.

While inaugurating the school on June 26, Baliyanga welcomed the students by sharing his dream “of a great school that will train effective pastors and future bishops who will transform the church and world.” 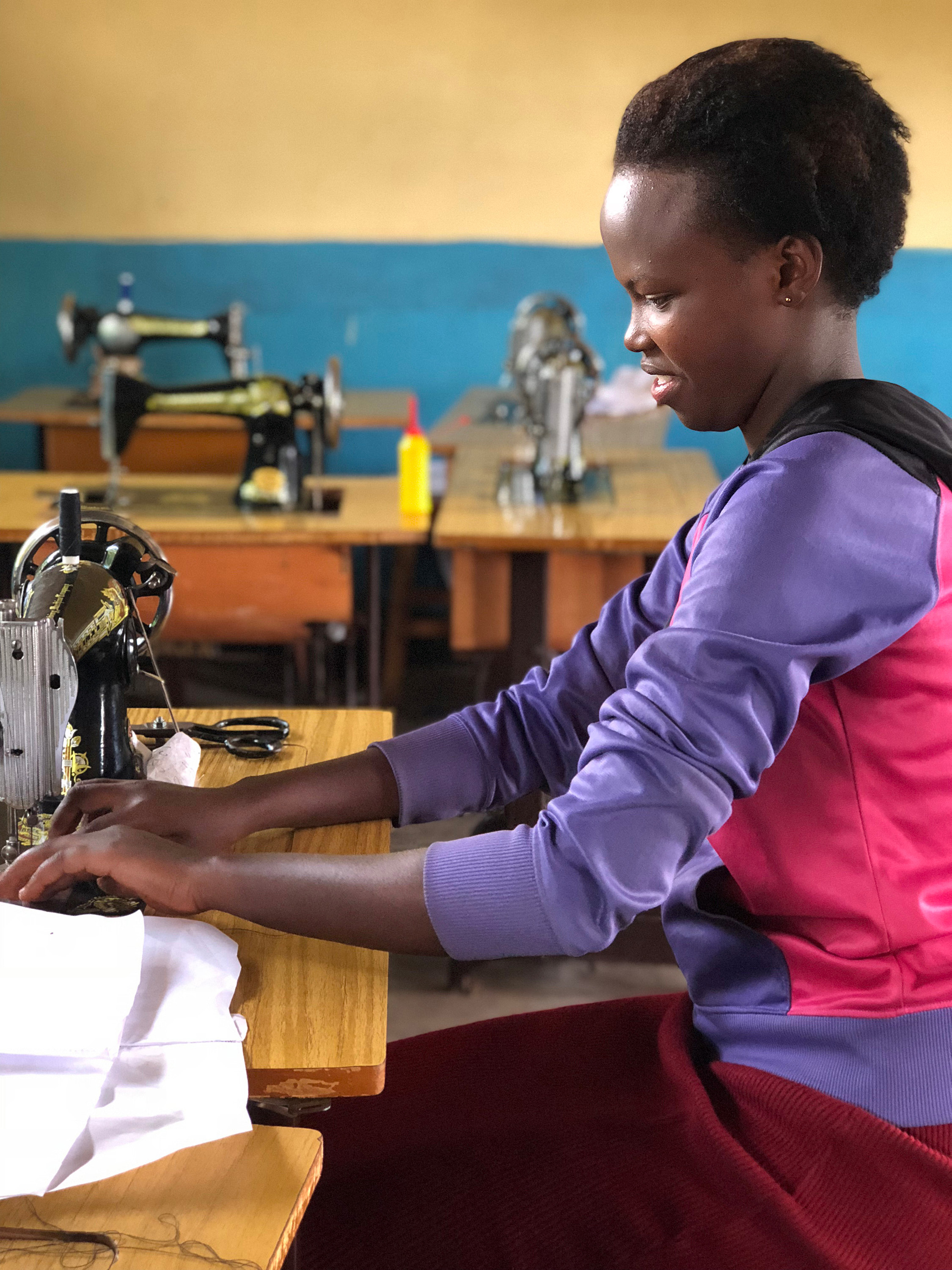 Rose Uwanmugira, a young adult in the Rwanda Provisional Conference, is studying tailoring with a grant from the Center for Health and Hope. Funds were raised by the Rev. Tom Owens, a United Methodist pastor in Asheville, N.C., a year ago when he and his friends ran a marathon up the 14,000-foot Pikes Peak in Colorado Springs, Colo. Photo by Donald E. Messer.

Previously, no opportunities existed in Rwanda for theological education for United Methodist pastors. “We hope to receive books, scholarships and volunteer teachers from around the world,” he said. “Someday, soon, we pray to be linked to the United Methodist Board of Higher Education and Ministry.”

Balyianga bemoaned the lack of opportunities for young people, but is pleased the church is helping sponsor two young people in vocational training in Kibungo in the fields of auto mechanics and tailoring.

Rwandan church leaders also are aware of the threat of a new type of genocide — the HIV and AIDS crisis in Africa. Nearly all the conference’s pastors and spouses have been educated in three different seminars focused on the prevention and treatment of the disease.

Participants at a June 25 HIV Conference sponsored by the Colorado-based Center for Health and Hope were warned by the Rev. Cimpaye Valentine, a United Methodist pastor from Bujumbura, Burundi, that “HIV can spread like fire during the dry season. Boom! And almost an entire village can become infected.”

Nearly 37 million persons are living with HIV in the world and nearly half are women. In Rwanda and sub-Saharan Africa, women comprise 60 percent of the infections. Valentine utilized her training as a nurse and pastor to demonstrate the correct use of male and female condoms, urging pastors and spouses to remember “they are human, subject to temptation, and both men and women need to be tested regularly.”

If infected, persons need to get treatment, since effective anti-retroviral medication lowers significantly the possibility of transmitting the disease to one’s sexual partner.

Baliyanga said the conference was designed to educate clergy and spouses as a “health team in the church and community.” He noted efforts were aimed at reducing stigma, not increasing shame and blame.

An HIV positive United Methodist pastor spoke about how he and his wife had learned they were infected seven years ago. “I share my story with our congregation,” he reported, “and many people come to us for counseling and help because we are open and they trust us.” Seven men in his congregation were recently diagnosed with the disease. 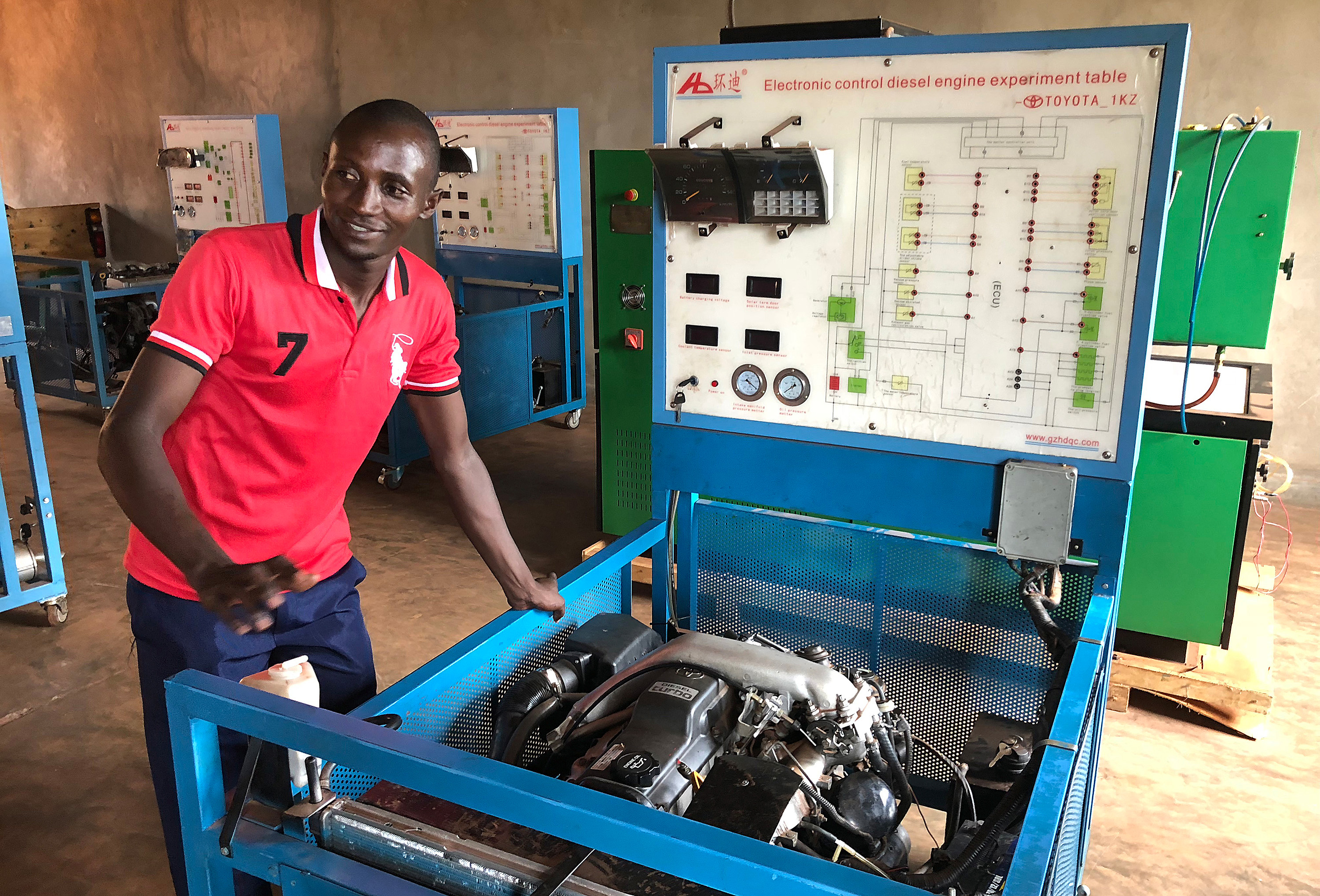 Alexis Karenzi, a young adult in the Rwanda Provisional Conference, is studying auto mechanics with a grant from the Center for Health and Hope. The Rev. Tom Owens raised funds for the grant with a marathon up Pikes Peak. Photo by Donald E. Messer.

Among the questions: “Because of the risk of infection from multiple partners, should I advise a woman in my congregation who is in a polygamous marriage to get divorced?” “Can we re-use condoms?” “What should an engaged couple do, if they discover one partner is HIV positive?”  “How can a baby be protected during breast-feeding, if the mother is HIV positive?”

Another pastor and district superintendent, the Rev. Alexis Nzabonimpa, pointed out how “grinding poverty forced some women into prostitution or ‘survival sex,’ in order to provide for their families.” These women are especially vulnerable to the virus, since they often are unable to negotiate protected sex and lack income to feed their families.

One strategy adopted by the Rwanda Provisional Conference is to distribute sheep and goats to HIV positive and other vulnerable women.

Each goat costs $50 and each sheep $60, but the gift keeps multiplying since, as Baliyanga reported, “a rotating system so that the first baby sheep or goat produced is given to another needy member of the church.” He said that of the first 30 sheep provided by the Center for Health and Hope, 18 gave birth and 5 died due to accidents or wild dogs.  Of the 30 goats, 2 died but 22 gave birth.

Another 60 sheep and goats will soon be distributed thanks to gifts from United Methodist churches in Colorado. “The challenge,” Baliyanga added, “is that the number of beneficiaries are very few compared to the people in need.”

Rwandans remember the extreme exclusiveness of tribalism that triggered a tragic genocide not many years ago and are intent on rebuilding a nation that includes everyone. Conversations about challenges faced by people living with HIV and LGBTQ persons in Burundi, Uganda, and Rwanda were the focus of a June 23 ecumenical workshop on “Inclusive Churches and Human Rights” in Gisenyi, Rwanda.

Sponsored by a new ecumenical Rwandan non-profit center, founded by Augustine Bahati, the forum probed the meaning of inclusiveness. As a United Methodist layman noted, “Christians believe all human beings have human rights and are to be treated with dignity, since all people are made in the image of God. An inclusive church or leader does not stigmatize persons living with HIV or LGBTQ people.”

When accepting funds from donors like the Center for Health and Hope, the Rwanda Provisional Conference promises not to discriminate against persons because of “ . . . ancestry, creed, disability, gender, marital status, or sexual orientation.”

Messer is executive director of the Center for Health and Hope, Centennial, Colorado, and president emeritus of The Iliff School of Theology, Denver.