Jan. 11, 2013, is Human Trafficking Awareness Day. More information and resources on this global crime are available from United Methodist Women, the Board of Church and Society and Interpreter Online.

No one really talks about it. Most of us probably don't even know that there are more slaves now than ever in human history. Depictions of human trafficking are often seen in movies and television shows, but we don't think of it happening in the United States.

That was until she went to a Passion conference that highlighted the topic of domestic human trafficking.

From there, Kramer said God led her on the path to bringing awareness of the issue to the campus of Florida International University in Miami, where she serves as the associate director of the Wesley Foundation.

"It really burdened me when I came home," Kramer said. "I knew I had to do something about it, especially when I realized it was happening in Miami."

She soon learned that Miami has the third-largest number of human trafficking cases in the United States.

Sarah McKay, a US-2 missionary working with FIU's Wesley Foundation, partnered with Kramer because of her passion for social justice.

"(Sex trafficking) is a reality that pains me so deeply when I attempt to understand it," she said. "Something that I've realized is central to caring about an issue - such as sex trafficking, and more importantly the people being exploited through sex trafficking - is having the opportunity to learn about it."

McKay is now speaking out against it. 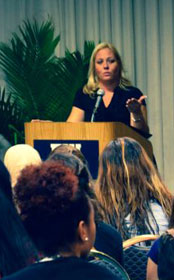 Katariina Rosenblatt, a survivor of the human trafficking industry, works to get other victims out of sex trafficking through a program she formed called There is H.O.P.E.
A web-only photo courtesy of Florida International University/Wesley Foundation.

The statistics of human trafficking are staggering.

The number of adults and children currently in forced labor, bonded labor and forced prostitution is 12.3 million, United Methodist Women reports on its factsheet, citing figures from the 2010 U.S. Department of State Trafficking in Persons Report. Human trafficking involves sex, labor and organ harvesting, and it's one of the fastest-growing crimes in the world, according to the U.S. State Department. Only drugs are now a larger criminal enterprise.

UNICEF reports the global market of child trafficking is at more than $12 billion a year, with more than 1.2 million child victims. According to the National Center for Missing and Exploited Children, about 2.8 million U.S. children run away each year, and within 48 hours of hitting the streets, one-third of these children are recruited into prostitution and pornography.

Kramer said girls living in poverty or from abusive households are more likely to be recruited into prostitution. The average age for girls being coerced to perform sex acts is 12 to 14. They are often manipulated by an older man or woman they think loves them, and they are often forced to take drugs.

And that is why once in these situations, it is so hard to get girls out of them.

After hearing the facts, Kramer knew she had to do something on her college campus.

Quickly, FIU 4 Freedom was launched. The group is a network of students and clubs at Florida International University that partnered with organizations in South Florida working to bring awareness and stop "modern-day slavery," according to the organization's website.

In less than a year, Kramer said the group has made an impact on the campus and saved lives.

To bring awareness, FIU 4 Freedom set up a "Freedom Week" in March and then again in October 2012 in which there were informational events across campus. 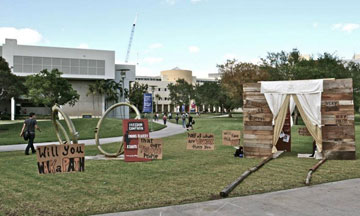 A walk-through brothel is part of an interactive experience on the Florida campus.

A mock brothel, of sorts, was set up in the student center to shock students to what is actually going on in this country.

Kramer said students could walk into the display adorned with signs that read "Girls, Girls, Girls" and "All Nationalities" to grab their attention. Inside was a bed with a young girl's dress and a pair of men's pants lying across it.

"When you are inside, it creates this reality of what people go through," Kramer said.

A survivor even shared her story during one of the panel discussions.

Katariina Rosenblatt, another Florida native, regularly shares her story. She formed an organization, There is H.O.P.E., that works to get victims out of sex trafficking and lead them on a path to recovery.

In 1985, Rosenblatt and her mother had escaped her abusive father and were living in a Miami motel. She was 13 when an older teenage girl befriended her. She said the 19-year-old offered her friendship and support that she needed at the time, but soon she learned that the woman was a recruiter for a child-trafficking ring.

Rosenblatt said she narrowly escaped losing her virginity to a 65-year-old man for $550. Others attempted to recruit her into trafficking in later years but she finally spoke out.

Rosenblatt said she knows what she is doing is making an impact.

"I gave four school talks in the last four months and 18 kids came forward," she said. All had either been approached for trafficking or had been bought and sold, she said. 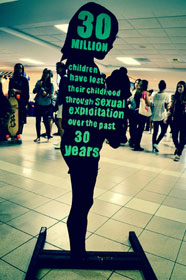 Jan. 11 is Human Trafficking Awareness Day. Here is one of the signs from FIU 4 Freedom's anti-human trafficking event on the campus of Florida International University.

Of all of the things McKay has learned over the past year, she said Rosenblatt's presentation made the biggest impression.

"It was shocking to hear about a childhood plagued with such confusion, pain and manipulation," she said. "It brought forth for us all the important truth that this is happening to real people - real people who have grown up and lived through something that no person should ever even have to imagine."

Kramer said after the March Freedom Week, she knew that trafficking was occurring on her college campus. One girl, she found out, was recruited out of her FIU dorm room.

Rosenblatt insisted that the mother contact the Federal Bureau of Investigation. The FBI investigated and found the daughter was being held in a brothel in Miami.

"God used us to help rescue a girl," Kramer said. "That is amazing."

Rosenblatt said she is now mentoring the teenager, who was reconnected with her family. She is now attending a college in another part of the state.

The Rev. Paul Massingill, Wesley Foundation executive director, said the student response to the events sponsored by FIU 4 Freedom has been "amazing."

"Many students are shocked, horrified and angered that so much slavery still exists and exists in their own city," he said. "Raising awareness has already led to students getting more educated and involved in these issues locally ... ."

Massingill said he encouraged Kramer to form FIU 4 Freedom because he wanted the Wesley Foundation to be involved in social activism.

"Young adults want to see faith embodied," he said. "Many are cynical about the church, and skeptical of the integrity of Christians."

Kramer said she isn't sure where she wants to go next with her mission. At first, she wanted to be on the streets and in strip clubs saving girls herself, but she soon realized that she could make a difference by bringing awareness to college students. Other college campuses already are following FIU 4 Freedom's lead and starting their own groups.

"Just that clicking in people's minds is a huge step from where we were 10 years ago," Kramer said.

Bringing awareness to a college campus not only will save women who could fall victim, but it also could spark action in students to bring change.

"My passion is to see students using their fields and talents" to bring change, Kramer said. "We are helping people care about it so they can use their vocation to make a lifelong impact."

*Edgemon is a freelance writer in Montgomery, Ala.