Before it was ever determined that the New York Giants would be facing the New England Patriots in the Super Bowl this weekend, members of United Methodist Women had decided on their game plan.

As the organization did last year in Texas, United Methodist Women is working with local groups and law enforcement to find a teachable moment about human trafficking during the pre-Super Bowl festivities.

Along with the fun of lining up to ride the zip line downtown, taking the kids to an indoor football theme park or claiming seats for Sunday's championship game in Indianapolis, some visitors may notice messages about trafficking: how crimes can be reported and where victims can find help.

The United Nations defines human trafficking as the recruitment, transportation, transfer, harboring or receipt of people - by threat, abduction, deception or abuse of power - for the purpose of sexual or labor-related exploitation. Eighty percent of those trafficked are women and girls, and half of all trafficking victims are younger than 13.

Through its "Intercept the Traffickers 2012" project, the UMW human trafficking team is addressing both an opportunity and a concern.

"There is no documented evidence of large athletic events causing trafficking, but incidences can escalate because those victimized by the crime are engaged in all aspects of 'commerce - related to any highly attended activity," explained Susie Johnson, executive secretary for public policy for the Women's Division, United Methodist Board of Global Ministries, which is UMW's administrative arm. 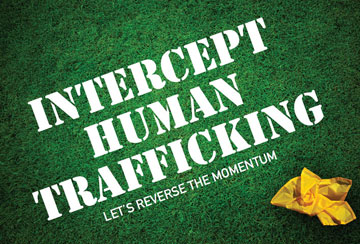 "What we do know is that men are principally the perpetrators of this crime, and using a male-centered event like the Super Bowl affords us the opportunity to engage with boys and men and expand their knowledge about a morally reprehensible crime that denies all persons to live free and to live whole."

In January, the Indiana General Assembly did its bit to raise awareness by fast-tracking legislation to strengthen penalties against sex trafficking of children younger than 16. Gov. Mitch Daniels, a Republican, signed the bill into law on Jan. 30, three days after Senate Bill 4 received a unanimous vote in the House.

Senate Democratic Leader Vi Simpson, a member of Ellettsville United Methodist Church, was a co-author of the legislation, which had earlier received the same unanimous approval from the Senate.

"This is an issue that has demanded attention long before news that the Super Bowl was coming to Indiana," she said in a statement, "but I'm happy we have finally reached bipartisan support on legislation that will better protect children in Indiana."

"I really think we are sending a message that we are going to be one of those states that will try to go out and prosecute people," said Rita Gaither-Gant, a member of the human trafficking team and a director of the United Methodist Board of Global Ministries. 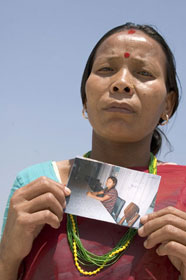 This desperate mother traveled from her village in Nepal to Mumbai, India, hoping to find and rescue her teenage daughter who was trafficked into an Indian brothel. A web-only photo by Kay Chernush for the U.S. State Department.

Gaither-Gant, chair of mission resources for the Indiana Annual (regional) Conference UMW, and Rosa Bernard, the conference UMW nominating chair, both from Indianapolis, are representative of the organization's efforts to engage in advocacy work on the root causes of human trafficking at state and local levels.

United Methodist Women has been involved with the trafficking issue for more than a decade, often working ecumenically, and sponsored a national training event in Atlanta in 2009.

Through its awareness programs at churches, community centers and conferences, the organization has educated an estimated 10,000 men, women and youth on trafficking facts, Johnson said.

"Each team member has collaborated with elected officials and advocates to ensure passage of legislation, providing financial resources, offering preventive services and other supports for survivors of the crime of human trafficking," explained Johnson, who serves on the D.C. Task Force Against Human Trafficking in Washington. "We have experienced success in Ohio, Iowa, California and now Indiana."

In Indiana, Gaither-Gant and Bernard have spent the past two years, "trying to educate our women to let them know what is going on and how they can get involved," Gaither-Gant said. "We are always asking them to write letters to their representatives and senators."

They are encouraged that trafficking has become a more visible issue. When the pair spoke at the denominationwide "Youth 2011" event at Purdue University, Gaither-Gant said she was "very impressed" by what the youth already knew about the subject. "They were, indeed, the most educated group that we have spoken to so far," she added.

Trafficking has become more of a U.S. problem in recent years. In its "2010 Trafficking in Persons Report," the U.S. State Department acknowledged that fact by ranking the United States with those countries fully complying with the minimum standards for protection of trafficking victims and providing information on domestic efforts to combat human trafficking. 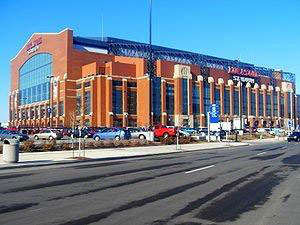 The City of Indianapolis will host Super Bowl XLVI in the Lucas Oil Stadium on Feb. 5, 2012. A web-only photo courtesy of Wikipedia.

In the U.S., people are primarily being trafficked for labor-related situations, the report said, including domestic servitude, agriculture, manufacturing, janitorial services, hotel services, construction, health and elder care, hair and nail salons, and strip-club dancing. However, U.S. citizens themselves, including runaway and homeless youth, are more are likely to be found in sex trafficking.

Bernard, who is part of the Indiana Protection for the Abused and Trafficked Humans Task Force, known as IPATH - one of 42 nationwide task forces funded by the U.S. Department of Justice - said she talks about human trafficking "every chance I get."

On its human trafficking website, United Methodist Women offers a downloadable Human Trafficking Resource Guide and other tools for educational and advocacy work, including a bulletin insert, flier, postcard, list of partners and action suggestions.

As the Super Bowl approached, Bernard planned to be among the volunteers packaging bars of soap Feb. 2 for distribution to local hotels. The Save Our Adolescents from Prostitution project was created by Theresa Flores, a sex-trafficking survivor who grew up in northern Indiana. The soap bars are imprinted with the national trafficking hotline phone number as a way to reach potential victims.