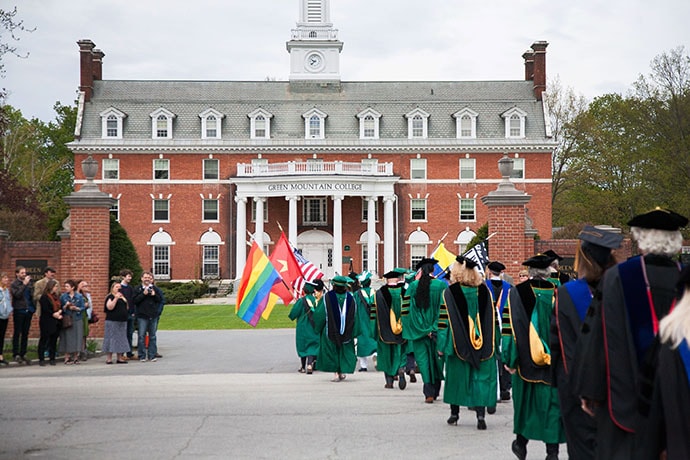 “It’s been a rough couple of months here,” said Robert Allen, president of Green Mountain College in Poultney, Vermont, which will celebrate commencement for the last time on May 19. The college, which is 185 years old and had branded itself around environmental sustainability, announced the closure on Jan. 23.

“You can imagine when we announced the closure, which is a day I will never forget,” he said. “There was some anger, a lot of tears and a lot of ‘What am I going to do now?’”

A similar scenario played out when Hiwassee College in Madisonville, Tennessee, announced its May 10 closure on March 28. Hiwassee was founded in 1849.

“It’s a tremendous challenge because this is far from where we hoped we would be, but our first responsibility is to our students,” said Robin Trocoli, Hiwassee president. “We’re working diligently to help them, and our faculty and staff, to get placed.” 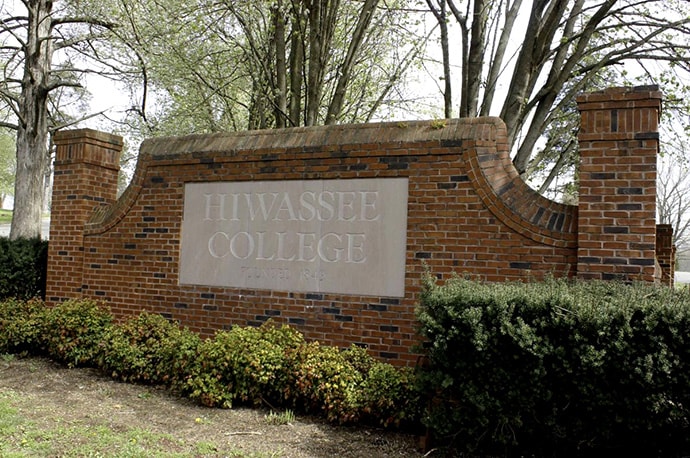 Hiwassee College in Madisonville, Tenn., will close on May 10, at the end of its spring semester. The 170-year-old school is affiliated with the Holston Conference of The United Methodist Church. File photo courtesy of the Holston Conference.
Large institutions such as Duke, Southern Methodist and Emory universities are among those affiliated with The United Methodist Church. But many more church-related schools are small, rural liberal arts colleges and universities such as Green Mountain and Hiwassee. And those colleges and universities are negotiating a tough, competitive environment.

Some historically African-American colleges and universities have also struggled, among them Bennett and Paine colleges.

Several factors have combined to create challenges for smaller schools.

“There are challenges in terms of decreasing numbers of individuals entering the college-age range,” said Mark Hanshaw, who oversees the Division of Higher Education at the United Methodist Board of Higher Education and Ministry. That agency supports the University Senate, a group of higher education professionals elected by General Conference. The senate determines which schools, colleges, universities and theological schools meet the criteria for listing as institutions affiliated with the denomination.

About 280,000 students attend the 115 United Methodist schools, colleges, universities and theological schools across the U.S., Hanshaw said. Many are first-generation college students, foreign students, or older than typical students.

“These are institutions that are filling particular holes in the educational landscape,” Hanshaw said. “If they did not exist, we can only imagine that a lot of the individuals served by these institutions would not have a ready or easy pathway to attain a college degree.”

Many jobs are out-of-reach without a college degree.

“There are all sorts of social challenges that come along with the inability to find solid employment,” Hanshaw said. “We know that cycle well.”

Perceptions about who can and cannot find a job are part of the dilemma for liberal arts colleges.

The trend in higher education is toward more science, technology, engineering and math curricula, focused on landing graduates on an immediate career path after graduation.

Trocoli argues that her liberal arts students do find employment, along with much more.

“Think about who you’re going to be at the end, in terms of understanding yourself, what you’ll bring to the table when you choose a life partner, or how will you be able to serve your community?” she said.

“I hope that mom and dad and grandma and grandpa, students — whoever is paying for this — that they look at the value in the end.” 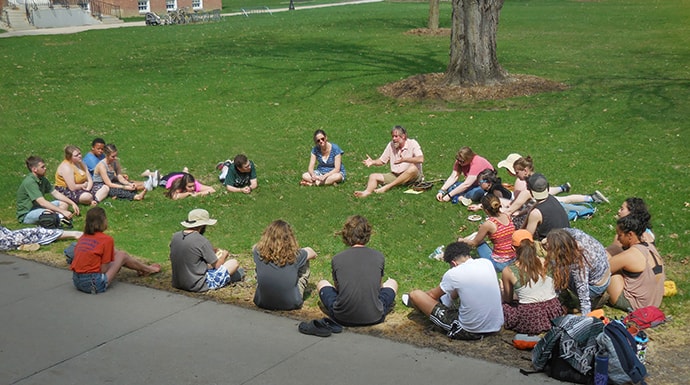 Professor Laird Christensen leads a class outside during the SLATE seminar, an introductory course for first-year students, at Green Mountain College in Poultney, Vt. Photo courtesy of Green Mountain College.
“Many institutions and many that would probably shock you only survive because of very large endowments,” Allen said. “When you have a billion dollar endowment, that can cover up a lot of operational challenges.

“But when you have a small endowment or effectively no endowment, you have to get all your money from tuition. Probably 98% of our revenue comes from tuition dollars, and without that you can’t survive.”

The largely rural locations of many United Methodist colleges and universities can also be a hindrance, Allen said.

“We have an absolutely beautiful campus,” he said. “It’s located in a very small town on the New York-Vermont border. But increasingly students are wanting to go to college in urban areas.”

“There will be more,” he said. “I would think in the next five years there will be a number of small college closures, particularly in New England.”

One small rural United Methodist liberal arts college announced in November it was in danger of closing. Its path to recovery may offer some hints to its peers.

“While our enrollment had nearly doubled in a six-year period … discount (tuition) rates had also gone up dramatically,” said Steven E. Titus, president of Iowa Wesleyan University in Mount Pleasant, Iowa. “Even though we were growing, our revenue was not keeping pace. We had thought we could sustain ourselves by ourselves, but we concluded that we didn’t think we could.”

Iowa Wesleyan announced Nov. 1 that it might close, and the community responded to the tune of $4.6 million, Titus said. Among the donors was an Iowa Wesleyan professor who donated $500,000 and the Mount Pleasant Area Chamber of Commerce with $120,000, reported the Des Moines Register. That allowed Iowa Wesleyan to keep going in the short run.

Looking for a way toward more permanent financial health, Iowa Wesleyan sent out 244 requests for serious proposals to collaborate. About 13 proposals came in. Those were whittled down to four. 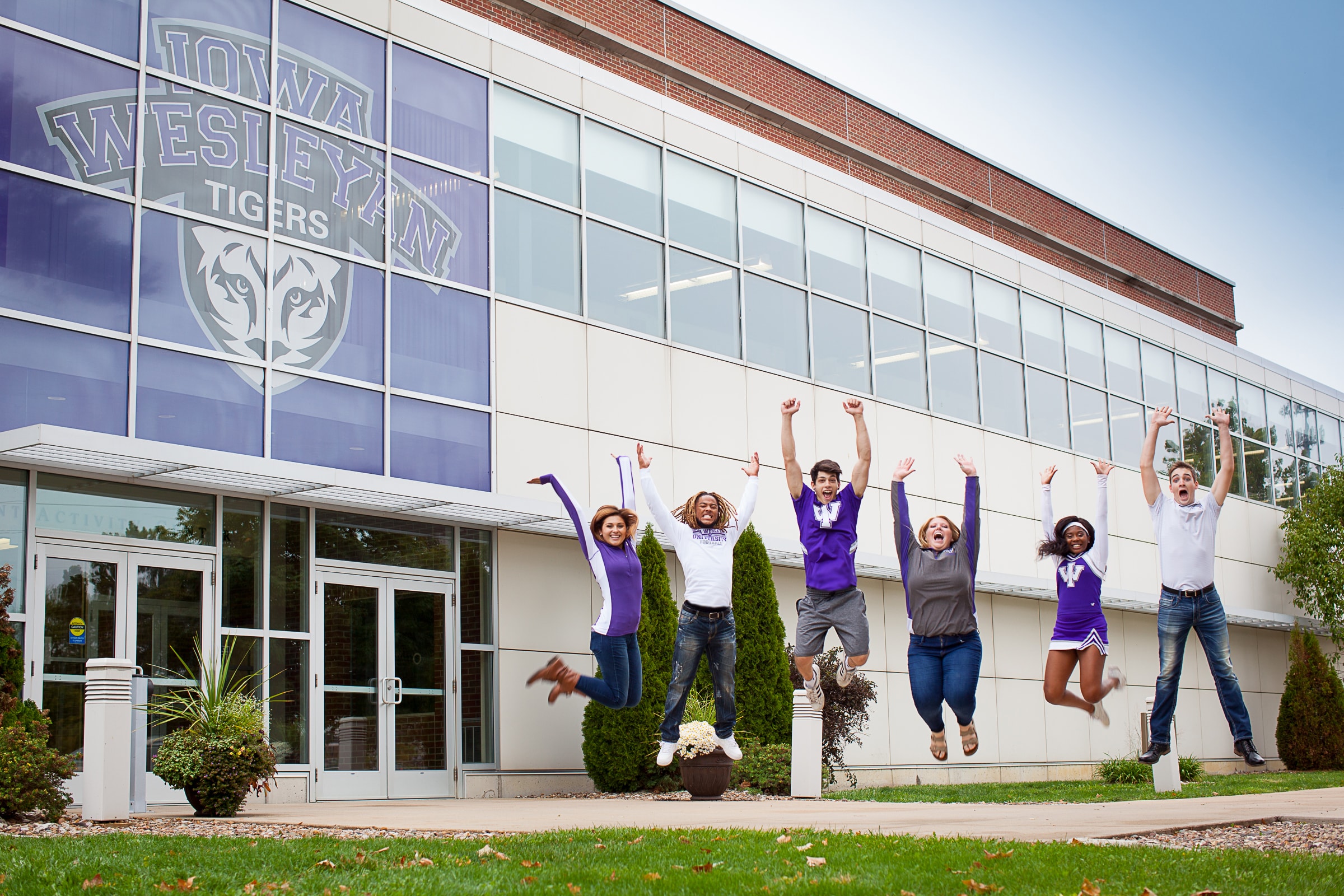 “On March 12, we signed a letter of intent with an exclusive partner — one of those four — and at the same time we also executed a mutual non-disclosure agreement,” Titus said. “So I can’t disclose who that partner is.”

If all goes well, the final agreement could be ironed out in the next two months, he said.

“I think this partnership has an opportunity to redefine rural higher education in the U.S.,” Titus said. “I don’t mean to be hyperbolic. I feel really serious about that. … I don’t know if this particular situation is completely transferable to another because every place has its own context and nuance. But I do think there are some lessons to be learned here.”

“All of these are going to be pieces of the puzzle,” Hanshaw said.

The United Methodist Publishing House, hard hit by the pandemic, has finalized some planned changes, including the sale of its Nashville property and transfer of a pension plan to Wespath.
General Church

With church buildings closed due to COVID-19, the United Methodist Publishing House has seen sharply lower sales and had to take severe cost-saving steps.
Evangelism

New church building in Debrecen, Hungary, has already been used for Pentecost and vacation Bible school.