The Rev. Tafadzwa Musona, superintendent of the Mutasa District, said the church has tried to make people aware of ways to slow the spread of COVID-19. But she said many in rural communities still believe only city dwellers get the disease.

“The church, the Ministry of Health and Child Care, organizations and many leaders have been doing a lot of education, but behavior change cannot be achieved overnight,” Musona said.

She said that can be seen in the failure of people to keep their distance, wear a mask or use hand sanitizers.

“I have witnessed this during the recent funeral of the late Rev. Themba Siwela at Mutambara West United Methodist Church of Chimanimani Chipinge District,” Musona said, adding that many people attended the May funeral.

In Sierra Leone, one of the last African countries to have a confirmed case of COVID-19, many in rural communities have said they believe the coronavirus is a Western disease that cannot survive in a hot country.

That may be changing as non-governmental agencies provide information and the country gets more confirmed infections. As of July 7, the World Health Organization reported 1,547 cases in Sierra Leone and 62 deaths.

By contrast, WHO reports Zimbabwe has 734 confirmed COVID-19 cases and nine deaths.

“At funerals I attended, pastors and leaders literally called for social distancing and keeping the proceedings strict to stipulated short times,” he said.

Gurupira said it takes time to “transition into the new social orders.” 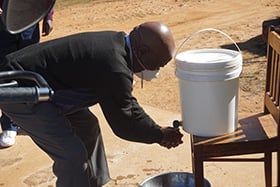 Naboth Makunike, the building committee chairperson for Mutasa Central United Methodist Church of Mutasa Nyanga District, washes his hands from a 20-liter bucket of sanitized water at a church gathering at Ehnes Memorial United Methodist Church. Photo by Kudzai Chingwe, UM News.
“The communities are more closely knit as relatives and observing such stringent social recommendations is difficult to adhere to. With time they shall catch up, how late it shall be it is not known,” Gurupira said.

The Rev. Jeffrey Nemakanga, pastor-in-charge at Mutambara West United Methodist Church in the Chimanimani Chipinge District, said communities are not adopting COVID-19 requirements despite awareness of the pandemic and fatalities.

“Since the start of the lockdown, at every funeral, the attendance is more than 50 mourners,” he said. “Everyone feels obliged not miss such an event because of respect and family ties with the dead.”

He said in rural communities, togetherness supersedes the adherence to COVID 19 requirements.

He also said some have been told and believe that they are safe if the temperature is in the high 30-degrees Celsius. If the pastor emphasizes precautionary measures, some people comply out of respect to their leader, he said.

“Managing to maintain the requirements in this remote area is just like trying to tame a wild buffalo to an ox,” Nemakanga said.

Dorcas Chipango, chair of the Buhera West United Methodist Church Staff/Pastors Parish Relations Committee, said people in her village of Zvenyika believe only residents of rich urban areas or whites get COVID-19, while others think they are safe as long as they don’t have visitors from the cities.

During funerals, she said people console each other with hugs, shaking hands and sitting close to each other, adding that failing to shake hands can mean being labelled as being prideful and anti-cultural.

Those who maintain distance or wear face masks sometimes face stigma as people laugh at them.

“The majority feel that buying face masks or sanitizers is less important than purchasing food for starving families,” Chipango said.

She believes education efforts by the government, churches and community leaders need to intensify, “otherwise we are sitting on a time bomb.”

On farms, 61-year-old Emillia Musamba of Premia Estate, said people trust each other so they don’t wear face masks.

“We were told to stay indoors, therefore, we just trust everyone is indoors and wearing of masks is not necessary unless we are visiting our town where there are many people. However, sometimes we receive visitors and we forget to wear masks and we become prone to infection,” she said.

She said everyone washes hands often and uses hand sanitizer, but hugging is part of the culture that can’t be avoided.

“As the community socializes in pubs, drinking beer and smoking, they would share the same cup of beer or cigarette,” Mawoko said.

Dr. Godwin Choga, the district medical officer for United Methodist Mutambara Mission Hospital, is worried about the lack of seriousness, unwillingness and rebellion against preventative measures. 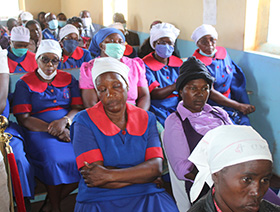 Attendees of the worship service sit very close together. Photo by Kudzai Chingwe, UM News.
“Everyone has a potential of being infected and infecting others,” he warns, adding that failure to adhere to the requirements can mean infecting others.

Mawoko said the abrupt imposition of the lockdown hampered the church’s ability to inform people about COVID-19 because they couldn’t provide education at physical gatherings. He said many people in rural areas don’t have cell phones, so they don’t get social media alerts.

He believes it would have helped for the church to buy and demonstrate the use of personal protective equipment.

While law officers enforce precautionary measures in cities, with penalties for violations, such enforcement is hard to implement in rural communities where the policemen are few and immobile, said Mawoko.

In Sierra Leone, United Methodist Ezekiel Saffa said as people have learned more about COVID-19, funeral processions have been reduced to only six people in the Kailahun District where he lives.

In Sierra Leone, memories of corruption around funding to fight Ebola have caused many to doubt the existence of COVID-19, said the Rev. Francis Charley, Bo district superintendent.

The denial cuts across rural as well as urban settings and is largely out of the suspicion that state authorities merely want to attract funding that comes along with the coronavirus outbreak. A 2017 BBC report said an internal audit of the first six months of the 2014-2016 outbreak that killed nearly 4,000 people in Sierra Leone found millions of dollars missing or unaccounted for.

Sierra Leone awaits a publication of the Commission of Inquiry report about alleged corruption in the management of Ebola funds.

In Pujehun, the Rev. Michael Columba says the denial created problems in influencing a behavior change in his community. “Before now, people in my community thought that the coronavirus was non-existent and that it is an invented idea by the government to access international funding,” said Columba, Pujehun district superintendent.

But he said religious leaders here joined other organizations in providing information. He said he has been preaching about the coronavirus in church and in the community to let people know how deadly it is.

“Like Ebola, when COVID-19 initially broke out, people thought it was another idea to ‘make corrupt money.’ But with the massive sensitization now going on, we are seeing some differences even though they still have some aspect of denial,” Charley said. He added suspicion was not limited to rural communities and many in Bo were skeptical of COVID-19.