The Rev. Dunford Cole was too ill with the coronavirus to help with May 31 worship services at the two churches he leads in south Alabama.

But he preached anyway via Facebook from his hospital bed the next day.

Fighting for a full breath, choking back tears at times, the 45-year-old pastor of Campground and Rutledge United Methodist churches still managed to lay it on. 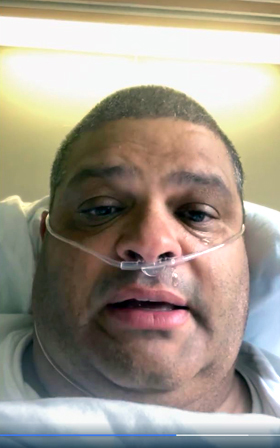 The Rev. Dunford Cole is a United Methodist pastor in south Alabama who recently contracted the coronavirus. He shared an emotional message from his hospital room on Facebook Live. Video screen grab courtesy of the Rev. Cole via Facebook by UM News.
Watch video.
“Y’all, let me tell you,” he said in a video post viewed more than 41,000 times. “You take care of yourself out there. This thing has been hard, and it’s been bad. And it’s as bad as they claim it to be.”

Cole is doing much better and just got home from Crenshaw Community Hospital. His message is the same.

“Respect this virus,” he said.

Though some churches have reopened and many are taking steps to do so, the number of COVID-19 cases has risen to about 2 million in the U.S., with 20 states seeing an increase in new cases.

Also mounting are the harrowing stories of United Methodists, both clergy and laity, who have been directly affected by the virus.

There have been clergy deaths, including the Rev. Rafael Luna, 61, pastor of a Hispanic United Methodist congregation in Denver; the Rev. Sherrie Dobbs Johnson, 72, a retired Greater New Jersey Conference district superintendent and wife of retired Bishop Alfred Johnson; and the Rev. Zosimo Maputi, 67, pastor of Antipolo United Methodist Church in the Rizal Philippines Conference East.

The Rev. Norm Moyer, retired pastor in the Arkansas Conference, entered a hospital with the coronavirus on March 27 and died there on May 11, having been connected to a ventilator nearly all that time.

A history lover and accomplished storyteller, Moyer was 66. He and his wife, the Rev. Bonda Moyer — who also contracted the virus but quickly recovered — just missed celebrating their 41st anniversary. 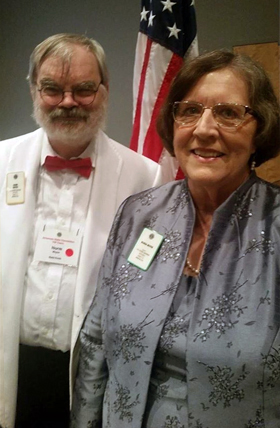 The Rev. Norm Moyer (left) and the Rev. Bonda Moyer, retired United Methodist pastors in the Arkansas Conference. Norm Moyer died from COVID-19 on May 11. Photo courtesy of Bonda Moyer.

The full extent of COVID-19 clergy and retired clergy deaths is unclear because some conferences are withholding names or cause of death because of privacy concerns and policies.

That’s the case in the hard-hit New York Conference. Bishop Thomas Bickerton noted that the conference isn’t always definitively informed of a cause of death.

“We estimate around a half dozen pastors and spouses have died (from the virus), and an untold number of parishioners,” he said.

She was part of a Zimbabwean United Methodist congregation in England’s Midlands.

“We are coping through the support of our United Methodist members,” said husband Wellington Sarupinda of himself and three sons. 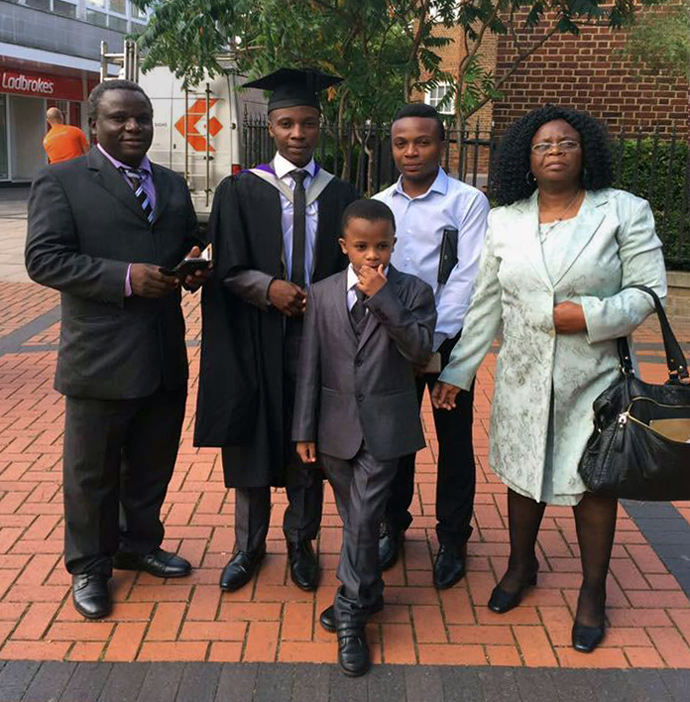 Alice Sarupinda (right) stands with her family for a graduation portrait. Sarupinda, a Zimbabwean and a United Methodist who lived in England, contracted the coronavirus while working at a nursing home in Walsall, England. She died April 17, at age 53. Photo courtesy of the Sarupinda family.
Recovery stories are, thankfully, far more common. Some are dramatic.

Chris Yuen, 32, spent 20 days on a hospital ventilator and was nonresponsive much of that time.

“A lot of people thought I wasn’t going to make it,” said Yuen, a member of Midland Park United Methodist Church in Midland Park, New Jersey.

Yuen rallied, and was able to leave a local hospital on April 22, after almost a month there.

“Several nurses and doctors lined up and gave me a cheer on the way out,” he said.

The Rev. Jennifer Stephens, associate pastor at Epiphany United Methodist Church in Loveland, Ohio, came down with the coronavirus in early April.

“I’ve been extremely healthy, so it’s shocking to me that the symptoms were as bad as they were,” the 47-year-old clergywoman said. “I’m an avid runner. I eat a plant-based diet.”

Stephens eventually tested positive for COVID-19 and was able to recover at home, thanks in part to house calls from a doctor and nurse in her congregation.

But she’s still dealing with extreme fatigue and daily headaches, and is concerned about long-term effects.

“It’s important for younger people to realize that this is not something where you just bounce right back,” Stephens said. 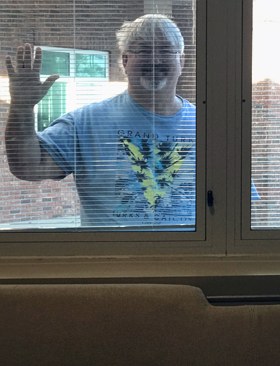 The Rev. Kim Strong, pastor of Trinity United Methodist Church in Conway, S.C., waves through the blinds at his wife, Margo, who was hospitalized in March with COVID-19. She took the photo during one of his window visits. Margo Strong has since recovered. Photo courtesy of Kim and Margo Strong.
In early March, the Rev. Kim Strong and his wife, Margo, thought they’d come down with the flu. He felt better after a few days. She felt worse.

They couldn’t get her seen at urgent care centers, and they struck out trying to get a virtual visit with a doctor.

On the morning of March 17, the situation grew dire.

“My wife woke me up and said, ʽI think I’m dying,’” Strong said.

Strong, pastor of Trinity United Methodist Church in Conway, South Carolina, took her to a local hospital, where she was diagnosed with COVID-19 and found to have pneumonia and a blood clot in one lung.

Margo Strong, 61, battled back, and was released from the hospital after six days.

“I’m very positive if we’d waited another day (to go to the hospital) she would have died,” the pastor said.

Not surprisingly, theological reflection has been a part of the coronavirus experience for United Methodists, including the Rev. Mike Baughman.

The 41-year-old Baughman, who leads Union, a coffee house and worshipping community in Dallas, had asthma as a child but found himself fighting for breath in a way he never had after he had the coronavirus in late March and early April.

As he struggled, the Hebrew word “ruach,” for breath or spirit, came into his mind.

“When you cannot breathe or it hurts to breathe, the notion that God is in that breath is a really powerful thing,” Baughman said. “It both gave me a deep appreciation for God’s presence in that moment and a deeper sense of how sustained we are by God.”

Many United Methodists who did not contract the coronavirus themselves have had a loved one who did.

That’s the case with Bishop Bickerton. As he has led the New York Conference through the pandemic, the bishop has had to worry about his 84-year-old father in Florida. 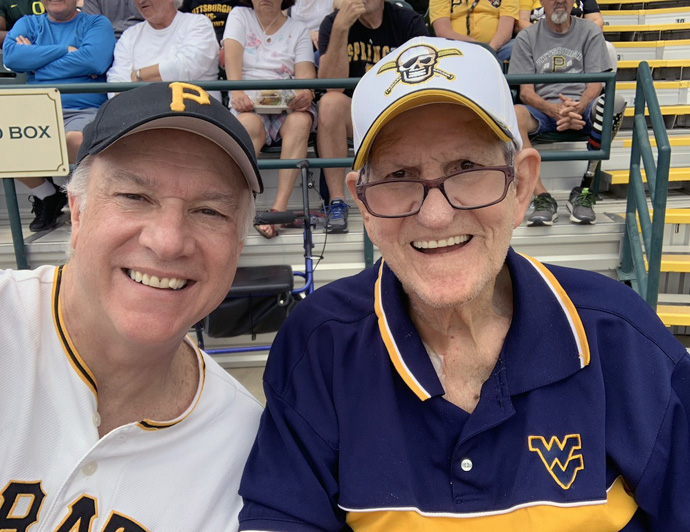 New York Conference Bishop Thomas Bickerton (left) with his father, Jim Bickerton, at a Pittsburgh Pirates spring training game in Bradenton, Fla., in 2019. Jim Bickerton, 84, contracted the coronavirus in his Florida nursing home/rehabilitation center in mid-April but has lately tested negative for the disease. Photo courtesy of Bishop Bickerton.
Jim Bickerton tested positive for the coronavirus in a nursing home/rehabilitation center in April. Bishop Bickerton and other family members were not allowed to visit — “Heartbreaking,” the bishop said — but did have daily contact through FaceTime.

“The nursing home is all completely negative at this point,” Bishop Bickerton said. “They had 58 cases and 12 people died. For my dad to be one of the survivors is a real blessing for us as a family.”

The bishop is deeply involved in planning for New York Conference churches to reopen, something that could begin later this month.

Meanwhile, many United Methodists have been part of the mass rallies against racism — events that hold the potential for spreading COVID-19.

Bickerton still favors participation and one reason is the connection he sees between racial inequities and the coronavirus.

“It’s been well documented that people of color and the immigrant population have been disproportionately affected because of the economy or health care difficulties,” he said. “It’s because of racism that the virus struck in certain points of our conference more significantly.”

“If we don’t, things like this pandemic are going to rise again.”

United Methodist churches held memorial services where people who lost loved ones during COVID-19 gathered to console one another and celebrate life — things they were unable to do during pandemic restrictions.
General Agencies

Officials of the United Methodist Church’s pension and health benefits agency met with central conference representatives to discuss pension plan sustainability in a challenging period for the denomination.
General Agencies