St. Paul United Methodist Church in Gulf Breeze, Florida, had only recently had its roof and stucco redone. The landscaping got some tender loving care, too.

“We were really proud of that. And now we’re missing a bell tower,” said the Rev. Christina Shaver, pastor.

Hurricane Sally blew slowly and torrentially through west Florida and south Alabama early on Sept. 16, and among other damage caused St. Paul’s bell tower to fall into the second tier of the roof. That let water into the sanctuary.

But Shaver is determined to have a worship service Sunday — online or outside — and she’s sure she and her church will take Hurricane Sally in stride.

“A lot of people, including me, have been through worse than a bell tower falling. So we’ll be OK,” she said. 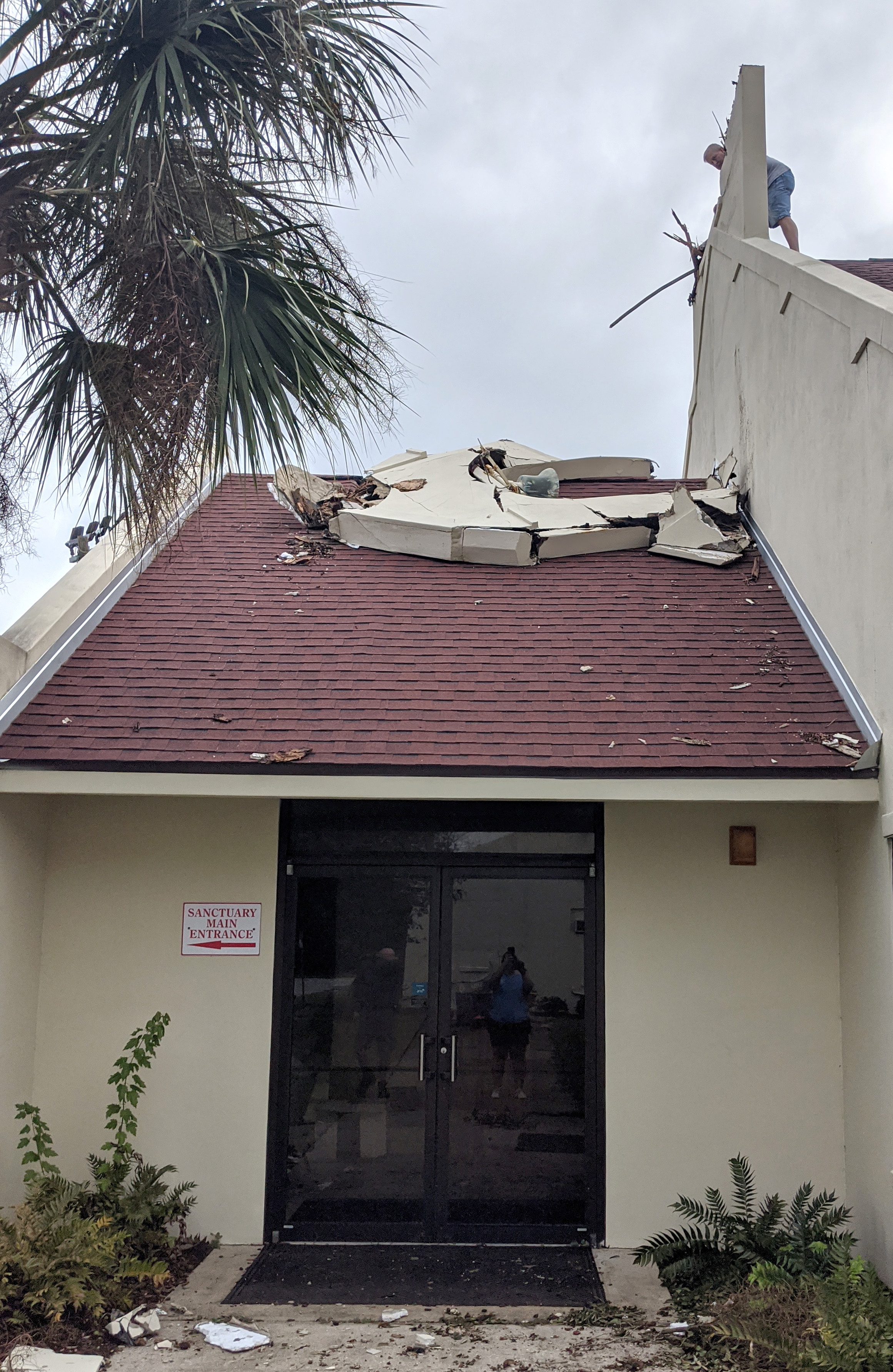 A man on the roof inspects the toppled bell tower at St. Paul United Methodist Church in Gulf Breeze, Fla. Hurricane Sally also caused some water damage to the church. Photo courtesy of the Rev. Christina Shaver.
Give to the United Methodist Committee on Relief’s U.S. Disaster Response and Recovery through Advance #901670.
Hurricane Sally left many United Methodists feeling they’d experienced a storm that was plenty bad but could have been much worse.

“We have around 50 churches in the district, and most of them are minimally damaged,” said Ron Toole, disaster response coordinator for the Pensacola District of the Alabama-West Florida Conference. “Most of that is water. We had rain for about 36 hours.”

At least one death so far is attributed to Hurricane Sally, which packed winds of 105 mph and dumped about 3 feet of water in the streets of Pensacola, Florida, causing white caps in downtown streets.

Along with flooding, the coastal area is facing knocked-out bridges and piers, as well as many downed trees and power lines. The Associated Press reported that more than 500,000 residential and business customers were without electricity in Florida, Alabama and Georgia as of early Sept. 17.

The storm had weakened to well below hurricane force but continued to drop potentially flooding rains as it moved through Georgia and into the Carolinas.

“The word I used to my wife all through the night was, ʽI love the Lord, I trust the Lord, but this is unnerving,’ ” he said.

Lillian United Methodist, near Perdido Bay and not far from the coast, had its steeple toppled over in the storm. Randall said the parsonage’s privacy fence was damaged, and there were trees down as well. 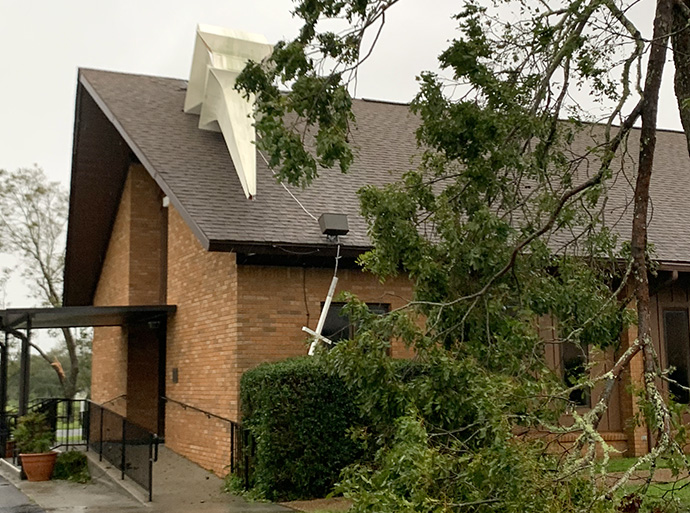 The steeple at Lillian (Ala.) United Methodist Church dangles from its mounting in the wake of Hurricane Sally. Photo courtesy of the Rev. Daniel Randall.
The church has been having outdoor worship services during the pandemic, and Randall hopes one can happen Sunday.

Orange Beach United Methodist Church, in Orange Beach, Alabama, is in an area badly hit by the storm. The Rev. Jim Kinder, pastor, said he’d been in touch with church members who had lost “everything.”

But the church itself is in a relatively high spot and fared comparatively well.

“We’ve had a lot of shingles torn off, so we’ve had some water damage,” he said. “But if we had electricity and the parking lot cleared, we could have church today.”

Orange Beach United Methodist had begun to meet again in person only last Sunday. If electricity is not restored by this Sunday, Kinder still hopes there can be a service outside.

“This is a time we need to see each other, even if we’re wearing masks,” Kinder said. 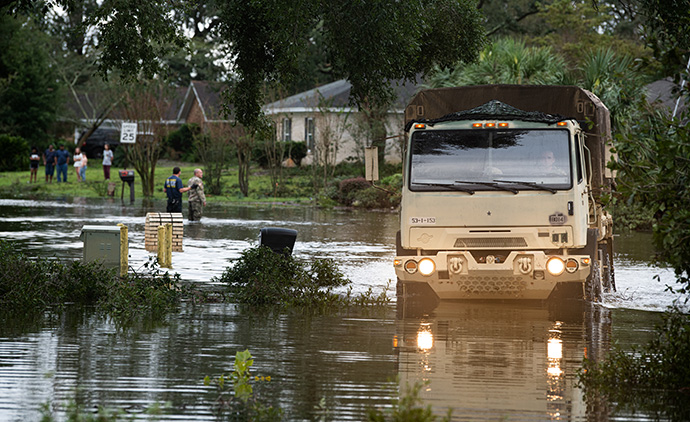 “It appears many of our churches were spared significant damage,” the conference reported late on Sept. 16. “There are several cases of roof damage; water entry; and downed trees/fences on church property and at clergy homes.”

The conference expressed appreciation for a $10,000 solidarity grant from the United Methodist Committee on Relief.

About 800 flood buckets were being delivered to the Loxley, Alabama, area, and another 800 to Pensacola. The conference plans to set up volunteer centers and will be sending early response teams with UMCOR-trained leaders.

Lara Martin, interim director of UMCOR’s U.S. disaster response, said early response teams were deploying as well from the Great Plains and Mississippi conferences and will be ready to work when conditions allow.

“The Mississippi Conference is making flood buckets to restock our depots,” she said.

“We work on designing a program and supporting a response locally,” Martin said.