Editor’s note: This is the seventh in an ongoing series about churches in West Virginia dealing with the opioid crisis.

Rachael Porter and the Rev. David Johnston seemed destined to be foster parents.

The couple met while on staff at a United Methodist summer camp, and there were always a few foster children in attendance.

One 9-year-old in particular, Johnston said, “would pick his scabs off just for the few moments of love and attention” he would get from a counselor.

“It just struck something in me,” he said. “As a way of expressing God’s love of us, needing to show that to kids who wonder, ‘Is there enough love for me?’”

Porter said she’d felt a desire to adopt since middle school after reading “A Child Called It,” which documented the author’s upbringing in an abusive home.

“I wanted to wait five years after we were married before we thought about having kids, though,” she said. 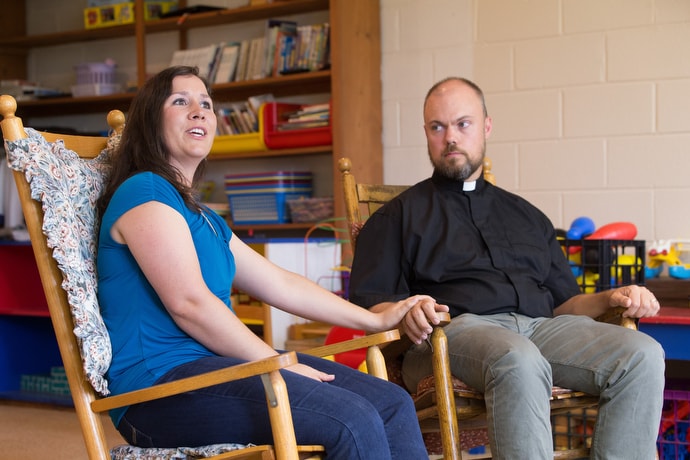 Rachael Porter and the Rev. David Johnston began as foster parents before adopting two children from a home with opioid addiction. West Virginia has one of the highest rates in the nation of children removed from homes due to drug abuse.

That five-year mark coincided with the couple’s move to West Virginia, where Johnston was appointed pastor of Concord United Methodist Church in Athens. Their very first week, they were invited to a cookout and encountered a woman who works as a home finder for Children’s Home Society.

The next thing they knew, they were registered for parenting classes and going through background checks. After learning about the great need for foster parents — West Virginia has one of the highest rates in the nation for children being removed from their homes due to drug addiction — they opted for that route over adoption.

The Friday before Ash Wednesday 2017, the call came and just like that, two more plates were set for dinner.

The children, a brother and sister aged 4 and 5, had already been in the foster care system for over two years, coming from a home with opioid addiction. This was to be their sixth placement.

“Moving was so much a part of their lives that after a few months one of them said, ‘OK, I’m ready to move to the new house now,’” Johnston said.

Questions about why they couldn’t live with their biological mother were also tough to hear, but Porter said honesty was the best policy.

“I told them that their mom was addicted to drugs and she wasn’t able to make right decisions and take care of them like she should, so they had to come be with somebody who could take care of them,” she said. 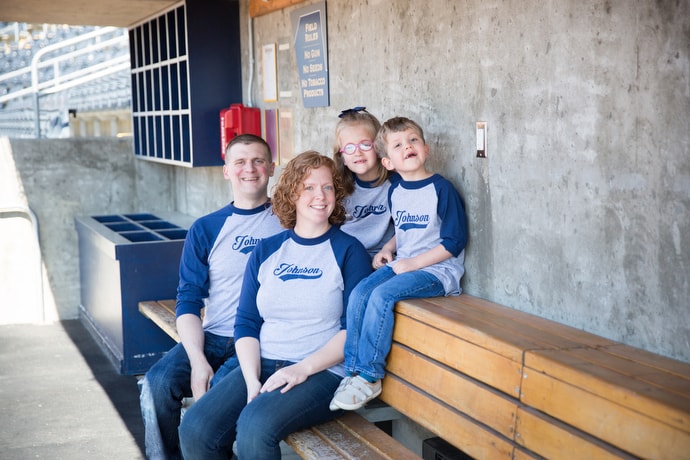 The Revs. Matt and Beth Johnson in Morgantown, W.Va., answered the call to become foster parents to children living in what Matt called “a rough situation.” After a two-year process, they were able to adopt the brother and sister they were fostering. Photo by Breena Johnson, www.jb-gallery.com.

The Revs. Matt and Beth Johnson have a similar story. They also answered the call to become foster parents to children living in what Matt called “a rough situation.” After a two-year process, in April 2017 they were able to adopt the brother and sister they were fostering.

“Our kids came in July, so we had a big Christmas that year,” said Matt, who is associate pastor at Suncrest United Methodist in Morgantown. “After opening presents, our girl, who was 4 at the time, looked at us and asked, ‘Will I live with you next Christmas?’ It was heartbreaking. All we could say was I hope so.”

“The question became, ‘Am I willing to absorb your suffering and walk through that together?’ It’s a redemption story being written,” she said.

Watch an interview with the Revs. Matt and Beth Johnson about their experience as foster parents.

Burlington Family Services Inc. is a charitable human services network related to Burlington United Methodist Church that offers adoption and foster care resources.
In West Virginia, 844-HELP4WV (435-7498) is a 24-hour hotline to guide addicts and families to resources and treatment for addiction and mental/emotional health.
Watch “Opioid Crisis: What you need to know,” a webinar sponsored by Wespath Benefits and Investments and featuring the Rev. Barry Steiner Ball.
Read other stories in the series, The Church Responds to the Opioid Crisis: The Road to Recovery in West Virginia

“Some nights after a tough day, we’d sit and ask, ‘Can we do this?’ It’s by the grace of God that we never both said no at the same time,” Matt said.

Both couples acknowledged how much love and support they’ve received from their congregations.

“It’s almost like they have half a dozen grandparents at this church,” Johnston said.

Having a group of potential sitters is also helpful, but it’s not quite that simple. Anyone the children are left with must likely undergo a background check; some agencies require sitters to go through the same certification process as the foster parents.

However, there is always a need for extra help with errands, or providing material needs for the kids. A few retired teachers even help with homework.

“If someone in your church is considering fostering, find ways to help them,” Matt Johnson said. “Stand up and say, ‘We’re not letting them do this by themselves.’”

Johnson recalled the whirlwind the day their children arrived, and the fear of not having everything the children needed.

“You don’t know what, if anything, they’ll show up with, or what size clothes or shoes they wear,” he said. “We had to call people and say, ‘I have a list of things, can you help us and run to Target right now?’”

Porter and Johnston insist that, though it can sound daunting, their experience as foster parents has been rewarding. And on Feb. 1, they officially adopted their children.

“It’s amazing how much joy these kids have. After what they’ve been through, they laugh constantly,” she said.

Johnston said the way his church has embraced the children is a blessing, as is seeing them “starting to learn the rituals of worship and the words, and knowing that they’re coming to know the story.”

There are numerous opportunities out there for people willing to care for children in these situations — and not only for young kids. Teens also need someone to help them with school or with life decisions they will soon have to make. Those who age out of the system may have nowhere to go and could use a network of support.

“I wouldn’t say that just anybody should do it, though there’s such great need. It’s got to be a calling,” Porter said, adding that she and Johnston are always honest and careful not to romanticize the experience when talking to others.

Johnston said having an “even-keel” personality is a huge help. 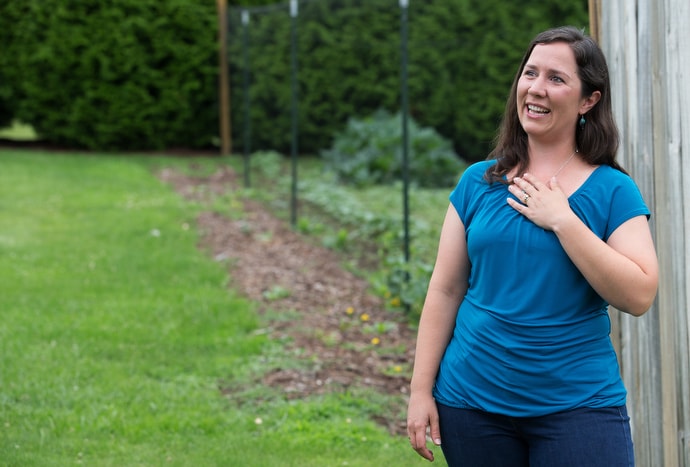 Rachael Porter says she felt a desire to adopt since she was in middle school.

“It’s hard work. There’s constant paperwork, contact with case workers, therapy. You have to be an advocate for them, particularly at school.

“You need a network of people to support you, who you can be vulnerable with about how hard it is.”

And you need to accept that your circumstances could change at any moment.

In the two years the Johnsons were going through the adoption process, they knew that until it was official, the children could always have been taken back into the system.

“You never get settled until the judge signs those papers. You can’t rest,” Beth said.

Matt agreed: “Think about how that feels for us, but the kids have to try and figure out, ‘Where am I going to live? What’s going to happen?’”

However, he said that now, if you didn’t know his kids were adopted, you’d never know.

Porter said as their adoption came closer to being official, her children stopped asking about moving. They started referring to their “forever home.”

After a difficult stretch, The United Methodist Church and Boy Scouts of America are committed to continuing their close relationship but with significant changes.
Faith Stories

UM News photographer Mike DuBose shares images from around the world to remind us that fathers from all walks of life have dreams for their children and deserve to be celebrated.
Violence

Grieving, praying after attack on school

United Methodists are praying for devastated families and a traumatized community after the murder of 19 children and two teachers. The Council of Bishops president is urging laity and clergy to “go on the offense” to stop mass shootings.