Standing in the chapel of Dawson Springs United Methodist Church, Lara S. Martin told the assembled group that they needed to remember only one thing she said that day: “Know that y’all are loved and you’re not alone. Long after the cameras are gone, UMCOR will still be here.”

Martin, director of U.S. Disaster Response for the United Methodist Committee on Relief, met Jan. 21 with district superintendents and disaster relief coordinators from across the Kentucky Conference to hear their needs and discuss plans for recovery following a string of tornadoes that struck overnight Dec. 10-11. The twisters left a path of destruction across several states and led to dozens of deaths. City officials, including Dawson Springs Mayor Chris Smiley, also attended. 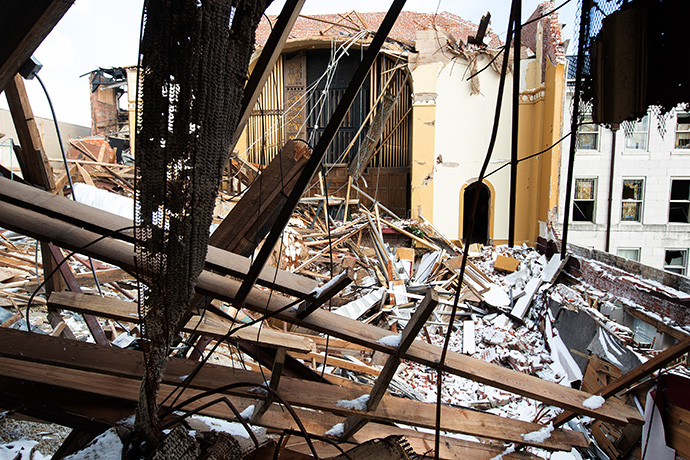 The sanctuary at First United Methodist Church in Mayfield lies in ruins after a tornado collapsed the church roof. Photo by Mike DuBose, UM News.

Martin started her position in early 2020 just as the coronavirus pandemic began, so this was her first in-person opportunity as director to survey the scene of a disaster and talk to the affected communities. She also visited church leaders in Mayfield, Kentucky, which is part of the newly formed Tennessee-Western Kentucky Conference.

“After visiting Mayfield yesterday and now Dawson Springs, the gravity of the situation and the extent of the devastation really hit home. It becomes real — real faces, real people, real community,” she said. 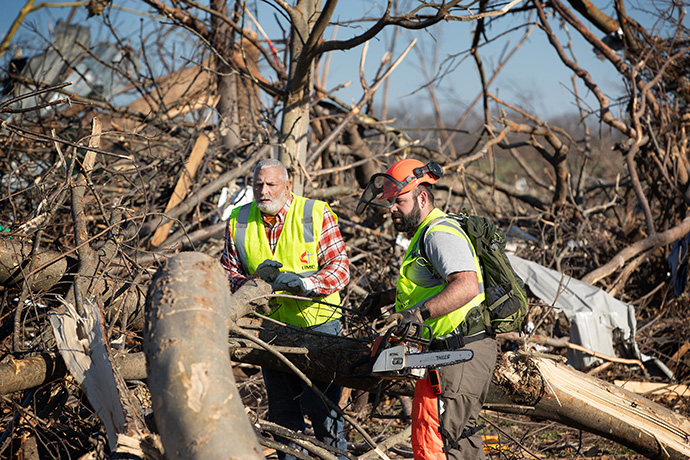 And yet, Martin added, in spite of the tremendous loss, “the Holy Spirit and God are still moving among these folks. There is joy; there is hope in the middle of this tragedy.”

Not quite two months after the storms, downed trees have been cut, some debris has been cleared, but the recovery process has barely begun. The fact that this occurred in what has so far been a harsh winter for the area adds to the complication. 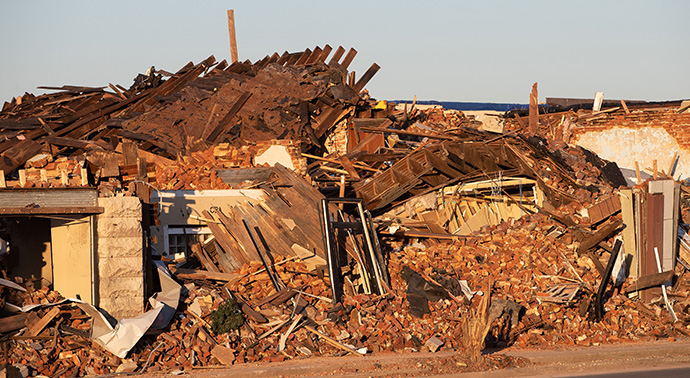 Many buildings in downtown Mayfield, Ky., were destroyed by a Dec. 10, 2021, tornado. Photo by Mike DuBose, UM News.

Ryan Drane, a member of First United Methodist Church in Mayfield, who is helping with the church’s initial disaster relief, said it’s common to think of storm season as spring through fall.

“Between winter and COVID, we’ve got unique sets of challenges,” he said. “We’re not just meeting immediate housing and food needs but also making sure people are able to stay warm every night, and places we would’ve used, like the church, have been destroyed.” 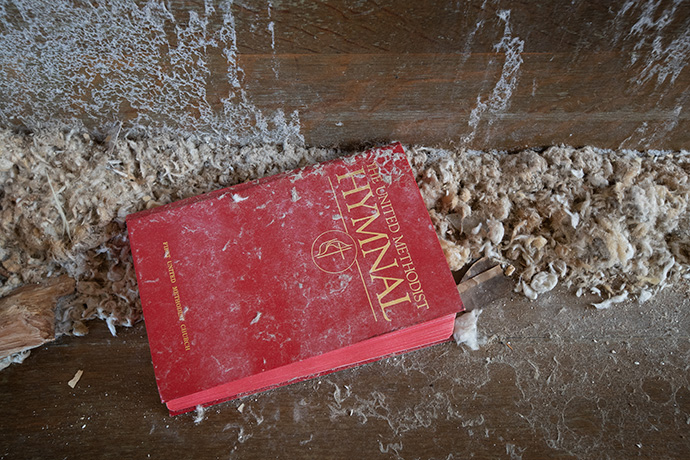 A waterlogged hymnal and wet insulation lie on a pew at First United Methodist Church in Mayfield after a tornado collapsed the church’s roof. Photo by Mike DuBose, UM News.

The damage to the Mayfield church is so severe that it will have to be torn down.

When the storm struck, emergency crews had their hands full responding to the Mayfield Consumer Products candle factory, where nine people died, and the many collapsed buildings downtown. People in smaller towns nearby began emergency response on their own. 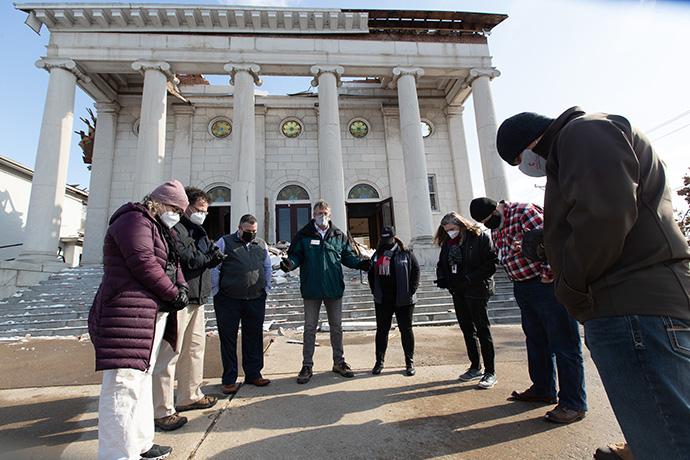 In Wingo, about 10 miles southwest of Mayfield, the town’s volunteer emergency responders were ready. The South Graves Community Emergency Response Team was started in 2020 as a ministry of St. Paul United Methodist Church in Wingo, which serves as the team’s command post.

“We started it to get folks interested in coming to church. We thought we might save some souls and maybe even save some lives,” said Tony Hudson, a lay leader at the church and board chair for the team. 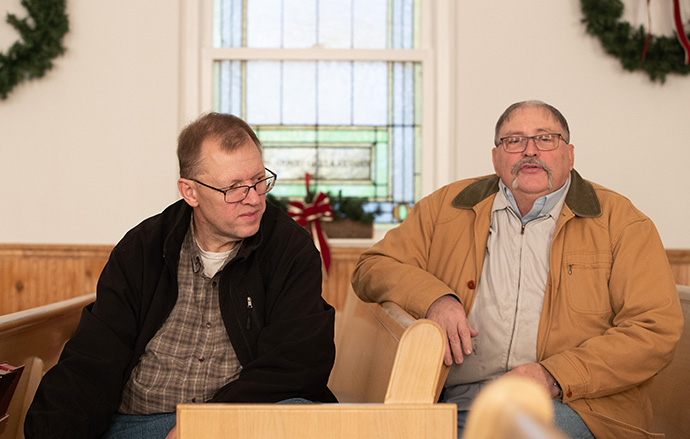 The Rev. Dennis Vance Jr. (left) and Tony Hudson discuss the work of the Graves County (Ky.) Community Emergency Response Team in responding to the deadly tornadoes that tore through the area in December 2021. Vance is pastor of St. Paul United Methodist Church in Wingo, Ky., and Hudson is one of the church’s lay leaders. Photo by Mike DuBose, UM News. 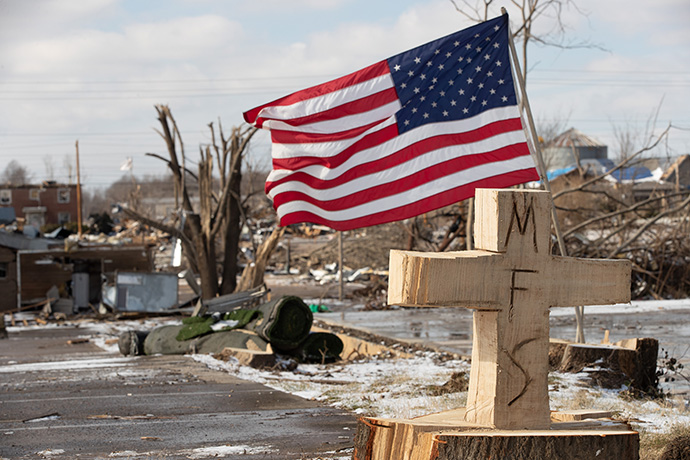 A U.S. flag and a cross carved from a tree stump form a makeshift memorial in Mayfield, where a tornado devastated much of the downtown area. The initials in the cross stand for “Mayfield Strong,” a motto adopted after the storm, which killed 22 people in Mayfield and surrounding Graves County. Photo by Mike DuBose, UM News.

Churches are accustomed to working together in Wingo. They hold quarterly multidenominational prayer meetings and have continued to collaborate during the disaster response, with nearby Enon Baptist Church serving as a shelter and Calvary Cumberland Presbyterian Church providing meals and housing supplies.

Despite the difficult conditions and all that lies ahead, Bishop Leonard Fairley of the Kentucky Conference said this is a time when he sees God at work. 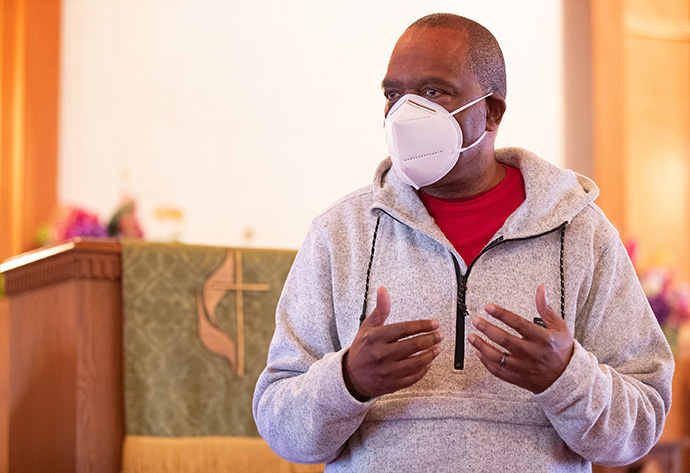 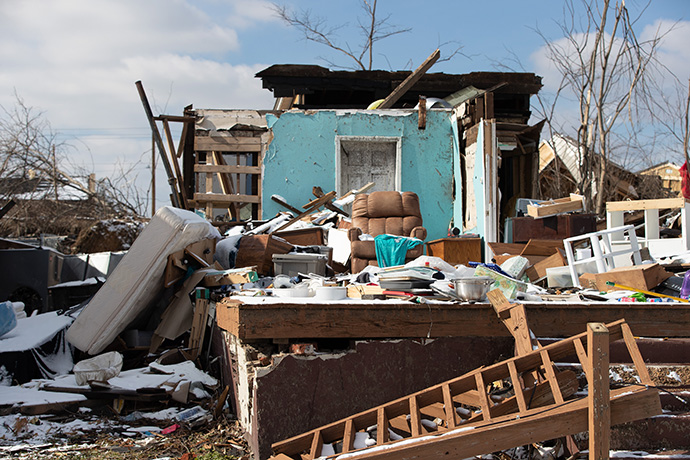 Martin noted that while every disaster is unique, there are some constants — with multiple phases that follow the initial event. A process of early relief and response must take place before the long-term recovery can begin. Photo by Mike DuBose
Give to the United Methodist Committee on Relief’s U.S. Disaster Response and Recovery through Advance #901670.

Donations also can be made directly to the conferences affected by the Dec. 10-11 tornadoes:

“The reality is that the transition from response to long-term recovery is not smooth,” she said. However, she added, “UMCOR is committed to journey with affected communities through recovery and whatever comes next for them and what they decide their recovery should look like.”

Since the tornadoes crossed through both the Kentucky and Tennessee-Western Kentucky conferences, the two entities are forming a collaborative relationship to work toward recovery.

“Working with Bishop (William T.) McAlilly (of the Tennessee-Western Kentucky Conference) has been great. Of course, he was down in Mississippi when (Hurricane) Katrina happened, so having somebody like that to work alongside has been a blessing for me,” Fairley said.

The Rev. Joey Reed, pastor of First United Methodist Church of Mayfield, was in the building when the tornado struck. Ironically, he and his wife sought shelter at the church because the parsonage doesn’t have a basement. The parsonage was unharmed. He calls it “a decision that we'll ponder for the remainder of our lives.”

Christ United Methodist Church up the street has taken in the congregation, sharing worship and office space while Reed’s church rebuilds. Reed said that his congregation is focusing on serving the community rather than grieving its loss.

Drane said that having to move away from in-person worship due to COVID-19 may have actually prepared First United Methodist Church for ministry outside its building.

“Scripture teaches us to be out of the building, helping people in their time of need. We don’t have a central location that we call our own, but as a church, the community is our own,” he said.

However, Reed said, losing the church building is still a traumatic loss for the congregation. The demolition date is not yet set, and he anticipates an emotional day when it arrives.

“The church will always be the people,” he said, “but I don't think that we can run too quickly to say, ‘Oh, it was just a building.’

The conferences are urging no individuals or churches to self-deploy at this time, but rather to get clearance and direction from conference disaster relief leaders.

Martin said that the communities have received all the physical materials and supplies that they need and are looking for space to house everything. Right now, the best way to support the ongoing efforts is through donations.

“The people in the pew have always been generous to UMCOR, to the conferences, to these local churches, and we would just ask for that to continue as we move forward together in the shared ministry,” she said. 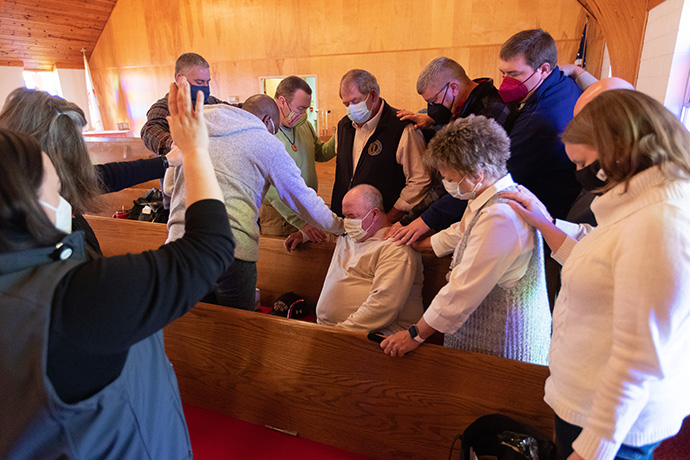