United Methodists gathered in prayer to call on the government to drop charges against the Rev. Glofie Baluntong, a pastor known for her social justice work.

In 2021, Baluntong was charged with attempted murder stemming from a March 25 incident. On Aug. 5, she received a subpoena requiring her to answer another criminal case for allegedly violating the country’s Anti-Terror Law.

She and her supporters claim she is innocent, and that the charges are part of a larger campaign of “red-tagging” designed to silence her and other activists who support the rights of indigenous people and the poor throughout the country. 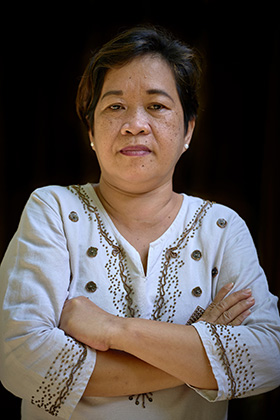 The Rev. Glofie Baluntong poses for a photo in Manila, Philippines. The United Methodist pastor is living in Manila after leaving the Philippine island of Mindoro, where she was charged with attempted murder. Baluntong and her supporters claim she is innocent, and that the charges are part of a larger campaign of "red-tagging" designed to silence her and other activists who support the rights of indigenous people and the poor throughout the country. Photo © Paul Jeffrey, Life on Earth Pictures.

Baluntong has been under government scrutiny since 2019 due to her work with the Mangyans indigenous group on the island of Mindoro. She has stood with the Mangyans in their fight to protect the environment and uphold their rights and also offered sanctuary to those fleeing violence.

The Philippines Central Conference Board of Church and Society released a call to drop all charges against Baluntong.

According to the statement, at the time of the attempted murder incident in which she’s charged, Baluntong was seen publicly elsewhere providing funeral services for a church member.

“Obviously, these contrived cases were designed to stop her from doing her prophetic duties of mercy and justice,” the statement said.

“Loving the poor and working for justice are the imperative of the church. … It is immoral to accuse anyone a terrorist when she or he faithfully do the mission of justice and peace.”

The church and society board and the National United Methodist Clergywomen Association of the Philippines Board of Women’s Work led the Sept. 7 prayer gathering and candle-lighting service at Good Samaritan First United Methodist Church in Quezon City. Around 50 people gathered to decry the charges and call for the government to stop the attacks on church people.

Baluntong served as a deaconess for more than two decades and as a superintendent of the Oriental Mindoro-Romblon-Marinduque District. Currently, she is appointed as a National in Mission, a position supported by United Methodist Global Ministries.

In a phone interview, Baluntong told UM News that the situation has been difficult.

“I had to stop performing my pastoral duties, which I so love doing. Serving the least, the last and the lost — this kind of social justice ministry is among the many hopes I would have wanted to impart to the church.

“I am never ashamed nor scared knowing that not all United Methodists uphold taking social justice ministry. But this has been a blessing instead. It raises awareness among our ranks. With the prevailing severity of the human rights violation — making trumped-up charges and red tagging to human rights defenders including the clergies — how does the church respond to this?” 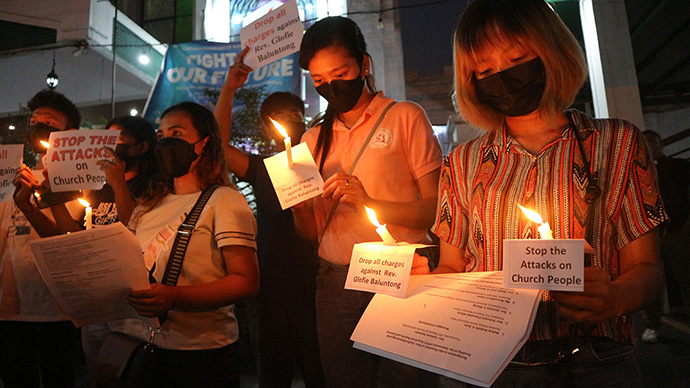 Supporters of the Rev. Glofie Baluntong gather at Good Samaritan First United Methodist Church in Quezon City, Philippines, to call on the government to drop charges against the United Methodist pastor. Baluntong, a former district superintendent and longtime deaconess, has been charged with attempted murder and is facing questions related to the country’s Anti-Terror Law. Photo by JSR Grafix.

During the prayer gathering, bishops from the Philippines connected virtually to express their solidarity.

Bishop Pedro M. Torio Jr. of the Baguio Area reflected on Isaiah 58:6-8, reminding everyone about losing the bonds of injustice, setting the oppressed free, sharing bread with the hungry and bringing the homeless poor into one’s house.

“Bring compassion, truth, peace and justice to the last, the least and the lost,” Torio said.

“Rev. Glofie Baluntong is not anti-government. She represents the people whom she serves. Her faithfulness calls her to help the poor and the weak.”

“I would like to appeal to the Armed Forces of the Philippines to grant her freedom and amnesty. I believe you will extend compassion, truth and righteousness. Please give freedom to the Rev. Baluntong. She is a pastor of integrity, working for peace and justice.”

Members of other church organizations also joined the call.

The Rev. Genesis Antonio, chair of the Philippines church and society board, read the group’s statement during the gathering.

“(Rev. Baluntong) has embraced the ministry of loving the poor. … She gladly took the tasks of communing with the Mangyan indigenous group and is one with them in the struggle to care for creation and in defending the rights of the indigenous people,” he said.

The Rev. Excelsis A. Biteng, vice president of the National United Methodist Clergywomen Association, talked about the calling of women like Baluntong.

“It is incumbent of us clergywomen to stand for the truth and just, manifest this faith grounded in love, and express it by doing justice. We urge people to love fellow human beings as we love ourselves.

“We uphold that faith in the service of the people is the ultimate embodiment of our calling to do justice, love mercy and walk humbly with God.”

The president of the Board of Women’s Work, the Rev. Nehemia P. Allera, also expressed support.

“The steadfast commitment, faith and witness of Rev. Baluntong is admirable. She has endured risks for justice. The board is with her in prayers and brave faith as we call to drop all charges against her.”

“As women in our faith collective, we persist in opening our eyes and opening our hands to see and reach out to the downtrodden,” said Mercedita Lopez, president of National United Methodist Women’s Society of Christian Service.

“A deaconess who became a clergy and who lives a life of a prophet, to fulfill the call to make disciples for the transformation of the world, alleviate suffering, eradicate injustice, develop full human potential, and participate and share in building a global community — these are embedded in her heart and can never be taken away from her,” Binuya said.

Members of the Association of Women in Theology also joined the gathering and strongly condemned the violations.

“The continuing violations of illegal arrests, trumped-up charges, intimidation, harassment and surveillance are continuing proof of the present government’s adherence to weaponizing the laws of the land to silence its critics and those who genuinely work for the people’s welfare. This policy is anti-women as shown in its various attempts to charge women human rights defenders.”

Pastor Oliver Mariquit Apdan of Kasimbayan — Union Theological Seminary called on the government to allow people of faith to fulfill their mission and work.

“We raise our fist for our fellow worker who unwaveringly fulfills her prophetic roles to emancipate and empower the poor, oppressed, marginalized, exploited, deprived and struggling people. We join the call and appeal to clear the name of Rev. Baluntong.”

The National Council of Churches in the Philippines also issued a statement, which Minnie Anne Mata-Calub, deputy general secretary, read during the gathering.

“We call on the NCCP member churches to pray and stand with Rev. Glofie Baluntong, with The United Methodist Church and with all the human rights defenders who are being persecuted because of their ministry and service to the poor. …

“Let us not allow another ‘red-tagging’ and ‘arrest and killing’ to happen in our time. Let us stand together with courage, faith and hope and call for an end to the attacks on church people.”

Baluntong said she is hopeful that the charges against her will be dropped so that she can resume her pastoral duties and no longer fear for her life and freedom.

“This is not just my battle; this is the entire church’s fight — the very church which nurtured me to do this prophetic ministry, anchored to the passion of Jesus Christ I am serving.”

Mangiduyos is a communicator in the Philippines.

“If you live life long enough, you have a moment when it all literally falls down,” writes the Rev. Dr. Tori Butler. She shares the time this happened to her and how she got back up.
Bishops