The United Methodist Church in Mozambique in partnership with the Missouri Conference's Mozambique Initiative is responding to the flooding that has devastated communities in the southern part of the country with a new emergency plan to assist more than 140,000 affected families.

The Rev. Joao Sambo, an Africa University graduate and pastor of Liberdade United Methodist Church in Maputo, was appointed head of a task force on relief by United Methodist Bishop Joaquina Nhanala on Jan. 28.

A team led by Nhanala began distributing food (rice, sugar, salt and cooking oil) and safe drinking water to flood survivors on Jan. 30. In Xai-Xai, a small city about 90 miles from Maputo, the team contributed food to the national flood relief effort.

Some items went out by airplane to communities that cannot be reached by road or boat. In affected communities in Gaza Province the team met, prayed with, consoled and assisted United Methodists and other families who have taken refuge in churches and with relatives living on higher ground.

This humanitarian crisis is the result of heavy rainfall in mid-January. The rains swelled rivers and led to flooding that washed away homes, crops and livestock in Gaza Province, Mozambique. United Methodist officials note that the National Institute for Disaster Management and the Government of Mozambique are forecasting growing numbers of flood survivors because they still are identifying isolated communities in need.

Locally, United Methodist congregations are responding with gifts of clothing, nonperishable food items and funds for the relief effort. The congregation of Liberdade United Methodist Church, where Sambo serves, is using its parsonage to store donations of all kinds from churches in the Maputo area.

A special account designated for cash donations is expected to be in place soon. Taskforce members will be back on the road Feb. 7, to continue with the distribution of food, water and household items. 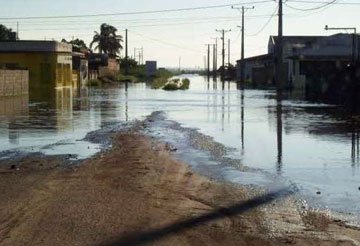 Xai-Xai city street is under water after flooding in Mozambique.

"Water is flooding the lower localities of the city of Chibuto and the Rev. Ana Rufina reports that Gomba local church of Chibuto UMC has a small parsonage and chapel submerged with flooding from Limpopo River," reports Ezekiel Nhantumbo, head of the Mozambique Initiative and an Africa University graduate.

"Despite constant warning by government authorities to abandon flood areas, there are nowthousands of peasants seeking to be rescued on demolished thatched houses and on top of trees. The floods are now picking up high speed down to the city of Xai-Xai through the lowland. It is still premature to have numbers of affected people. It is clear that thousands of acres of agriculture land were swallowed and crops lost," he said.

"Even the difficulties we face in the field, we take them as a learning experience and characteristic of the kind of ministry we do," Sambo writes. "We thank God for using us all as His instruments...we pray again that together we can make a difference in somebody's life."

Contributions can be made through UMCOR or the Missouri Mozambique Initiative.

*Stevens is in the Africa University Development Office, United Methodist Board of Higher Education and Ministry.

Angola West Conference mobilizes to provide food and other relief as heavy rains destroy homes and other infrastructure.