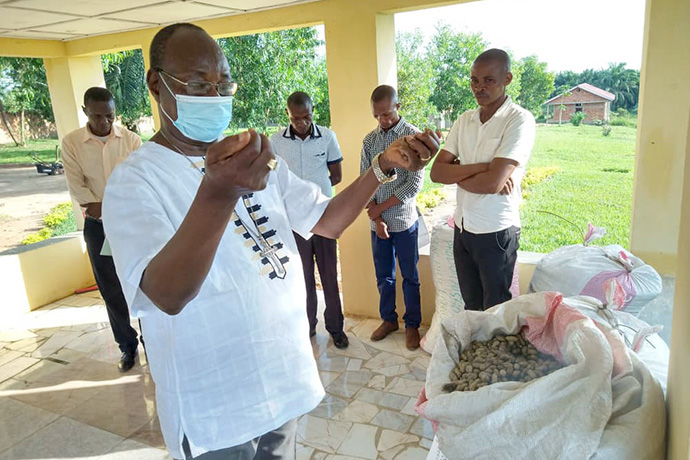 “All people, United Methodists and non-United Methodists alike,” he said, “need to understand that this is a crucial moment. We must embark, without wasting time, in agriculture in order to produce more food and fight famine.”

Elie Etako, who works for the church’s East Congo Development Bureau, said the field cultivated by young people during the last growing season made it possible to harvest more than 3,500 pounds of groundnuts. The maize crop did not fare as well, but the harvest for cassava extends from November through December.

In Congo, millions of people have been affected by famine aggravated by conflict in some areas and the COVID-19 pandemic. The United Nations’ World Food Programme and the Food and Agriculture Organization report that the number of people affected by high acute food insecurity in the DRC is estimated at 27 million, or one in three people. This includes nearly 7 million people facing emergency levels of acute hunger.

“For the first time,” said Peter Musoko, representative for the World Food Programme in Congo, “we were able to analyze the vast majority of the population, which helped us get closer to the true picture of the staggering scale of food insecurity in DRC.”

“The recurrent conflicts in eastern DRC and the suffering they cause remain a serious concern,” he said. “Social and political stability is essential to strengthen food security and the resilience of vulnerable populations. We urgently need to focus on producing food where it is needed most. The main agricultural season is approaching, and there is no time to lose.”

Unda said neighboring areas not yet affected by insecurity should redouble their efforts in agriculture to produce even more food.

“The surplus of agricultural production in peaceful areas will have to be exported to the provinces affected by insecurity caused by armed groups,” Unda said.

Earlier this year, the United Methodist Board of Global Ministries approved $3.5 million to help realize the late Bishop John K. Yambasu’s dream of making The United Methodist Church in Africa self-sufficient through agriculture. During its fall meeting, board members approved another nearly $1.1 million for the Yambasu agriculture initiative.

Nico Ndomba, who teaches at Kindu Methodist University, said Congo has millions of acres of arable land just waiting to be cultivated.

“In Congo,” Ndomba said, “you don't need chemical fertilizers to get the yield.”

However, Etako noted, The United Methodist Church in eastern Congo does not have its own land to cultivate the fields.

As part of the new efforts, Edmund Melusi Makowa will coordinate the agriculture department. A Global Ministries missionary, Makowa will serve as a resource person for agriculture and food security issues in eastern Congo.

“Edmund will provide technical expertise and promote technologies on sustainable agriculture for the episcopal area of eastern Congo, according to the vision and mission of The United Methodist  Church,” Unda said when he introduced Makowa to the delegates of the Eastern Congo Annual Conference in July 2022.

Etako said he believes Makowa’s expertise will benefit the church and improve agriculture.

“Our concern,” he said, “is that every local church should have a field to fight famine and malnutrition. We have the support of several leaders at the level of the East Congo Annual Conference who have responded positively.

“I believe that with this field initiative, it will be very easy for local churches to take charge of themselves and fund the advancement of God's work.”