The United Methodist Church’s St. John’s Circuit in the Mutare District is helping members of the Deaf community earn a living by assembling bicycles and rearing rabbits.

The projects assist church members with disabilities learn new skills so that they can become self-sufficient and participate in the country’s struggling economy, said the Rev. Togara Bobo, pastor at St. John’s.

The church has more than 1,500 members with more than 20 from the Deaf community.

The Holy Bike Sales project, a brainchild of Bobo and church partners in Switzerland, seeks to develop systems that ensure inclusivity and sustainability through empowerment of people living with disabilities.

“I am pleased with the works being carried out by the group. … A couple of lives have already been transformed since the inception of the project two years ago,” Bobo said.

He said the church’s partnership with Dr. Mathias and Marian Tapis in Switzerland has made the mobilization of resources from their home country an easy task.

“I appreciate the Tapis family for the work they are doing in Switzerland, for most of our work has been made easier ever since we started to assist our friends living with disabilities,” Bobo said.

The initial capital invested to start the project remains a revolving fund for the purchase of required materials, said Bobo, while members equally share the profits.

The project chairperson, Benjamin Dhliwayo, expressed gratitude for the donation. He said the skills he and the others have learned allow them to adapt to rapid change in the economy, which could be an important factor in determining whether the future is full of promise or peril. 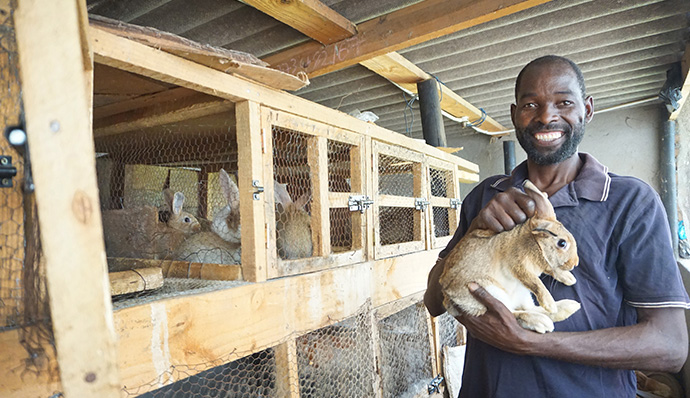 Damion Mutinhiri shows off one of the rabbits he and other members of the Deaf community have been raising in Mutare, Zimbabwe. The Ministry with Women, Youth and Children assisted the group with capital to start the rabbit-rearing project. Photo by Kudzai Chingwe.

Dhliwayo, who is deaf, said that thanks to the bike sales, the young men no longer have to ask their parents for money for their upkeep or telephone calling cards, and they even contribute to the family’s budget.

“We sometimes help our parents pay school fees for siblings and buy grocery items,” he said.

“It is our hope that the skills we have acquired so far in running the bicycle-assembling project will not only transform our lives as youths but also determine our future.”

He said despite the struggling economy, the group has managed to sustain a living from the sale of bicycles. At least four bicycles are assembled and sold to locals monthly, fetching between $260 to $320 U.S. per bike.

“We are satisfied with what we are getting as proceeds, considering the state of the economy in our country,” Dhliwayo said.

The assembling of the bicycles takes place in a two-room house built for the project on church grounds, but the management is the responsibility of the five project members.

The Ministry with Women, Youth and Children also assisted the group with capital to start a rabbit-rearing project to boost the financial base of the group.

The project, which started with five rabbits, now has 52, enough to make it a small-scale farming initiative. She said besides selling the rabbits, the group also benefits from the meat for their families.

“Although the idea was to get income out of the sale of rabbits, there are other secondary benefits, such as relish,” Gurupira said, speaking of the practice of adding something flavorful to an otherwise plain meal.

“As a church, we believe that the support we give to the able-bodied people should also be the same as those living with conditions,” she said.