The Rev. Tommy Shelton began his Sunday sermon seated on a stool. “I don’t have the strength to stand,” he admitted.

The pastor, also a police sergeant in the Nashville suburb of Mount Juliet, spent the past week leading search-and-rescue among homes destroyed by the EF-3 tornado that cut a jagged path across Middle Tennessee. He told UM News on March 8 that he also “had to work the scenes of those who did not make it.”

Now he sat before worshippers seeking comfort for their own losses, including two century-year-old buildings of Dodson Chapel United Methodist Church. Shelton has preached there in recent months.

Shelton choked up as he reflected on the past week.

“This community is hurting,” he said. “So many people don’t know what to do. But this week I’ve seen the love and support of this community come together stronger than I’ve ever seen it before in my life.” 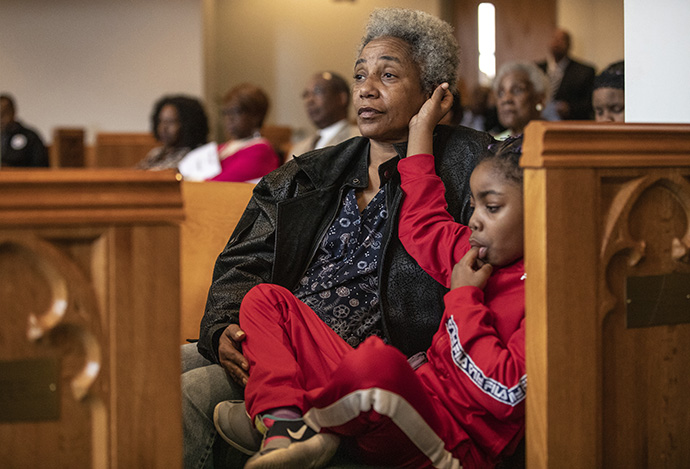 The prayer service at nearby Hermitage United Methodist Church, where Shelton is associate pastor, drew some 100 people — far more than the 40 worshippers who regularly attend Dodson Chapel.

At least 24 people died in as a result of tornadoes in Middle Tennessee late March 2 and early March 3, according to the Tennessee Emergency Management Agency. Eighteen of the dead were in Putnam County, but deaths were also reported in Davidson, Wilson and Benton counties. Nearly 600 buildings sustained heavy damage or were destroyed, according to ABC News.

In North Nashville, at Gordon Memorial United Methodist Church, the Rev. Paula Smith asked that people in the pews who had helped out in some way after the tornado tore through the city to raise their hands. Many did.

Just about all of the 300 or so people in the church raised their hands. 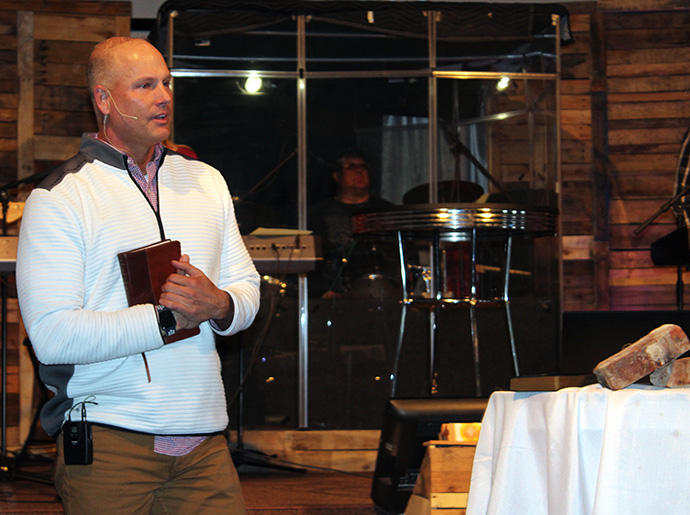 Gordon was hosting the East Nashville congregation of Braden Memorial United Methodist Church, which sustained heavy damage, including the destruction of its steeple.

“I’m sorry that our church got hit by the tornado,” said Mary Crenshaw, a member of Braden. “But any church I attend, I feel safe in.”

Bishop William T. McAlilly of the Nashville Episcopal Area, along with disaster relief coordinator Robert Craig and several leaders from the United Methodist Committee on Relief, hopscotched across Middle Tennessee, showing their support at several services.

“These are two of our historic black churches in the city,” McAlilly said at Gordon. “Their coming together to worship and support one another is a powerful witness for our community.” 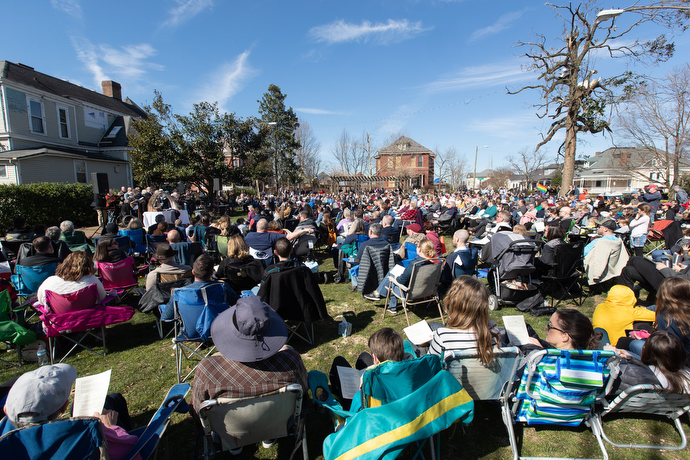 Hundreds of church members and guests gather for worship in the park adjacent to East End United Methodist Church in Nashville, Tenn., on the first Sunday after a tornado struck the church. Photo by Mike DuBose, UM News.

At East End United Methodist Church in East Nashville, hundreds of church and community members packed the park adjacent to the sanctuary — where the congregation had held its first worship service in 1907 as it awaited the building’s construction.

East End member Sharp Emmons, one of the first on the scene to help clear the park after the tornado struck, said being able to worship in that space was meaningful. 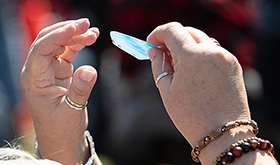 Cheryl Stone holds a shard of glass from a stained glass window that was destroyed by a tornado at East End United Methodist Church in Nashville, Tenn. Church families were offered the glass pieces during an outdoor worship service in the park adjacent to the church. Photo by Mike DuBose, UM News.
Donate and learn more about the Tennessee Conference’s Tornado 2020 response
Give to the United Methodist Committee on Relief’s U.S. Disaster Response and Recovery through Advance #901670
View more images on our Flickr page

“Many of us have been so busy with recovery that we haven’t had a chance to process, so worshipping next to the sanctuary affords us that opportunity,” he said.

The theme of the service was “We are not alone,” a reference to Micah 7. In the immediate aftermath of the tornado, co-pastor the Rev. Judi Hoffman and others ventured into the sanctuary to see what items might be recovered. A Bible was still perched on the pulpit and the wind had blown it open to that passage, which reads: “When I fall, I will rise. If I sit in darkness, the Lord is my light.”

Hoffman said she doesn’t necessarily see the Bible being opened to that text as a “sign” because the Bible is full of the message that when God’s people call out, God hears them.

She thanked the volunteers — church members, neighbors and complete strangers — who showed up without being asked.

In a twist on Holy Communion, attendees were given polished shards from a huge stained-glass window that was damaged by the storm. Pastoral staff thought it was fitting, as the window depicted the Body of Christ.

The Rev. Sheila Peters of Braden, who spoke at the Gordon service in North Nashville, noted that hardship from the weather destruction goes deeper than the deaths and damage to buildings. 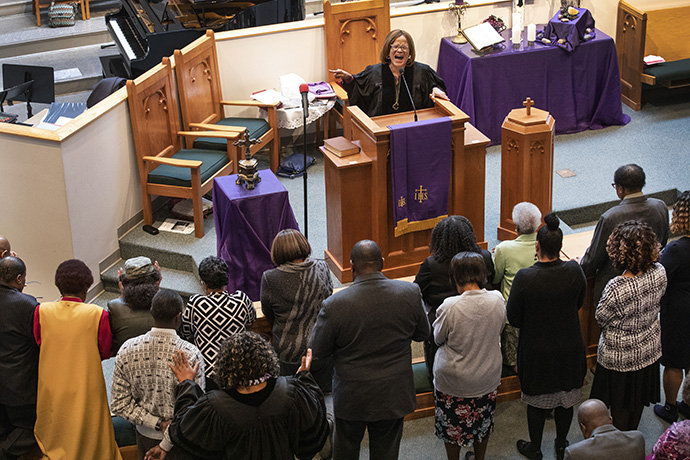 At the service in Hermitage, many expressed gratitude that neither Dodson Chapel nor the damaged homes across the road from the church saw any loss of life.

The Rev. Becky Yates, the church’s pastor for four years before she retired last June, celebrated that part of the church’s ministry withstood the storm and was already being put to use — the church’s longtime food pantry.

“Two 100-year-old buildings built of brick on solid foundations fall, and the sheet-metal portable sitting on concrete blocks didn’t move,” she said to applause. “Y’all, not even a can was knocked off a shelf. Does God want his children fed, or what?”

Yates assured those gathered that it is OK to grieve a building that contained so many memories. 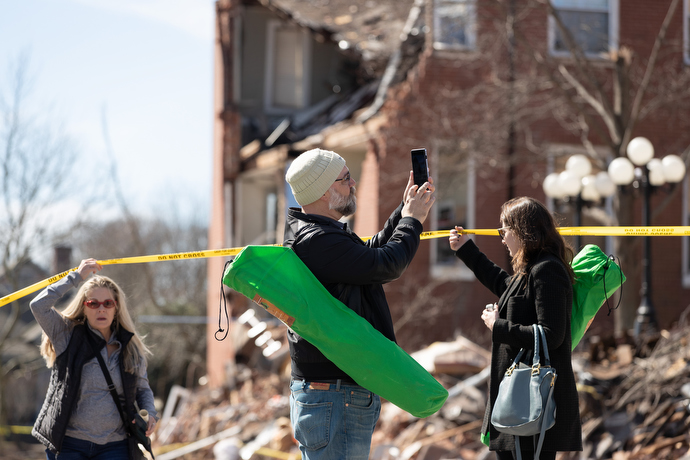 United Methodists in Africa are praying for their brethren in Tennessee, said East Congo Area Bishop Gabriel Unda Yemba of the Episcopal Region. The Tennessee Conference has a long partnership with East Congo.

“I called all of my faithful to prayers to support them morally and spiritually,” Unda said.

Smith, pastor at the Gordon church in Nashville, urged her flock not to try and skip over the grieving process.

“Everything is not alright. We are hurting,” she said

“Give yourself permission during this time. Anybody feeling any anxiety this week? Anybody been afraid this week? Uncertain of what the future will hold for ourselves? Anybody feel any loss this week?

“I just want to remind you that God is our source of hope, of peace, of restoration and healing in all our broken places.”

This story was compiled and reported by Joey Butler, Heather Hahn and Jim Patterson, UM News reporters in Nashville, Tennessee. Contact them at 615-742-5470 or [email protected] To read more United Methodist news, subscribe to the free Daily or Weekly Digests.