The Council of Churches in Sierra Leone is lobbying the government to stop river pollution after its advocacy committee unearthed life-threatening risks.

The United Methodist Church is a member of the Council of Churches.

The committee used the Jong River in Mattru Jong — one of the affected rivers that flow from the north of the country to the south — as a case study for a fact-finding mission. In Taiama in the south, the Jong is known as the Taia River; in Maggburaka in the north, people call it the Pampana River.

Between 150,000 to 200,000 people live alongside the river, according to Ernest Ndomahina, an environmental consultant who works with the Council of Churches.

Matthew Punga is a United Methodist teacher and an experienced fisherman. He lives in Taiama in the Moyamba District in southern Sierra Leone. He explained the impact of the pollution on fish in the Taia River.

“Once the river gets dirty,” he said, “one can notice (tilapia) struggling to reach the surface. The river is so dirty now that it is directly affecting the lives of the fish.” 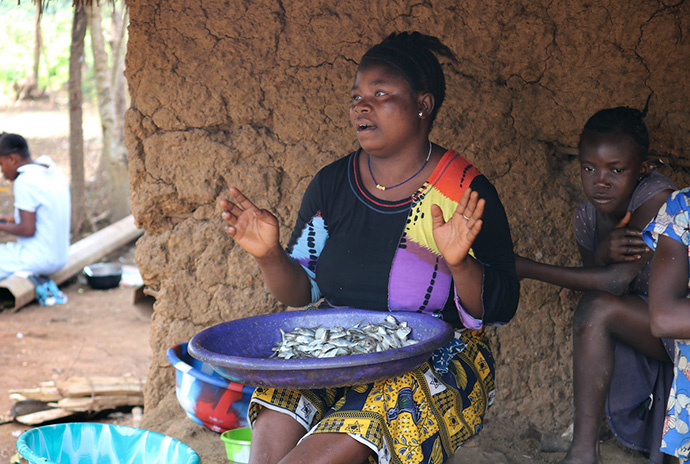 Fatmata Sheriff prepares fish for her family at Wubange Village Junction, near Mattru Jong, Sierra Leone. Sheriff said the Taia River used to be her family’s source of livelihood. She said her husband used to fish in the river. On a good day, they would eat some and sell the rest in the community. She now buys fish for her meal from a village 10 miles away. She said fishermen who insist on diving in the river develop eye defects and mouth blisters. Photo by Phileas Jusu, UM News.

Riverside debris ranges from ankle-deep to knee-deep. “Some fish,” Punga continued, “reside in deep holes close to the bank of the river. They are the ones we see floating dead because their homes have all been filled with debris or clay flowing down from the mines upstream. The tilapia are dying now. Their skins have developed spots.”

A lifelong resident of the area, Punga noted that the river once was a source of drinking water. This is no longer the case. In remote communities that lack roads even for motorbikes, access to pure water is scarce. People are forced to drink river water.

Effects of the mining on river communities, Punga added, are much greater than meets the eye. Sometimes, people use sachets of chlorine to purify water. Such solutions can only provide a few liters of water.

When chemicals are used in the mining of gold in the riverbed, the damage is even greater because the river contains the poisonous chemicals, Ndomahina said. 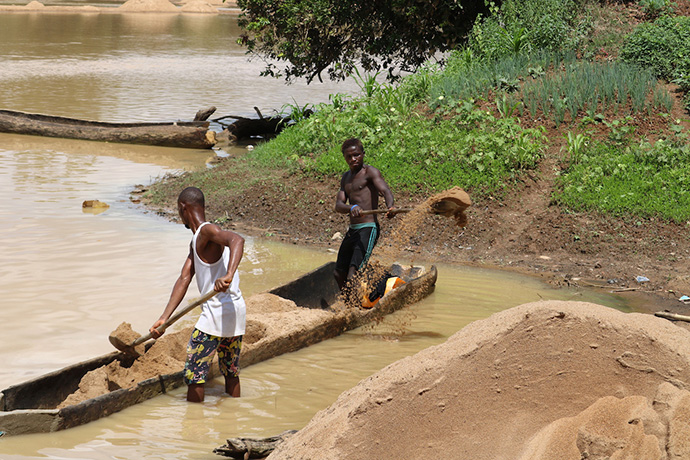 Young men offload sand from a boat on the shore of Taia River near Taiama, Sierra Leone. Sand mining in the Taia River is a normal source of livelihood for the young people in Taiama, especially in the dry season. Some of the workers say they developed skin issues from exposure to pollution from gold mining operations upstream in the Tonkolili District. Some still take the risk because sand mining remains one of the very few options for them to make a living. Photo by Phileas Jusu, UM News.

He is also concerned that the pollution is affecting wildlife that drink from the river in the affected areas. Chemicals used in the mining of gold — cyanide and mercury — are neurotoxic, which could affect the brain.

The effects, he said, vary depending on the levels of contact. When the locals mine gold, they apply mercury to the soil. Mercury coagulates the gold. When the miners want to recover the gold from the mercury, they put it directly over fire. Because they often do not wear personal protective gear, they inhale mercury fumes. Because the poison affects human respiratory systems directly, inhaling the fumes can prove disastrous, he said.

Thomas Gbappy, paramount chief of the Kori Chiefdom and a United Methodist, agreed.

“The situation of the river is worrisome,” he said. “The color of the river has deteriorated so badly; it is now brown. Even the birds that fish in the river have disappeared. My people can no longer drink from the Taia River.”

In Matru Jong, town chief Edna Tucker said, “I have received messages from Banta Mokele of how the fish are dying. Some people were admitted at the hospital. I am happy that you are here to find out about the pollution of the Jong River.”

A fact-finding team from the Council of Churches in Sierra Leone visits with Abdul Turay (seated, center), chief of the Masseneh Village in northern Sierra Leone. The team was investigating pollution caused by gold mining along the Pampana River. Photo by Phileas Jusu, UM News.

While residents of non-mining river communities like Taiama and Mattru Jong vehemently detest the river pollution, others upstream, who work with the mining companies and, perhaps, derive benefits, tacitly support them.

“Some of our people collaborate with the mining companies that put the dredges into the rivers,” said Masakama Kanamanka III, paramount chief of Kholifa Rowala Chiefdom in the Tonkolili District in northern Sierra Leone. He blames the lukewarm support of government agencies like the National Mineral Agency and the Environmental Protection Agency for the increasing levels of mining leading to the pollution of the rivers.

“They are making our job as paramount chiefs difficult,” he said. “They make our people think that we are harassing them or working against their livelihoods at the mining sites by discouraging the mining. When we say ‘No’ without their cooperation, our people think we are the bad ones. Hence, our powers are limited.”

Haja-Bai Kafari Turay III is paramount chief of Tane Chiefdom in the Tonkolili District, where much mining is allegedly occurring. In a phone interview, he said that two mining companies were operating around the Pampana River in his chiefdom. Asked if he was aware of how the resulting pollution affects other communities, he abruptly ended the interview.

In September, the Council of Churches in Sierra Leone organized a one-day conference on water justice and pollution. During the Freetown event, stakeholders in water services across the country shared the challenges related to service delivery, pollution, water-resources management and access to safe drinking water. Attendees saw a 15-minute video sharing information from the fact-finding trips, the state’s response to the deteriorating situation, and how the church could help.

Participants shared their challenges in providing access to affordable clean water for the public. The council published a statement, which it has shared with government agencies engaged in water services.

“Our gathering here today at this conference,” said United Brethren in Christ’s Bishop John Pessima, “is to look into these injustices our fellow Sierra Leoneans are going through and see how we can help save their lives.” Pessima heads the Council of Churches in Sierra Leone’s advocacy committee.

Church officials are maintaining a delicate balance between meeting the goal of cutting greenhouse-gas emissions and running effective ministries that use energy. A one-year progress report was issued April 19.
Mission and Ministry