Apollo Kagwe, an herbalist in rural Kenya, relies on a solar-powered lantern to light his way home from work and illuminate his household into the night.

“Without it, I would be blind,” he told d.light, the company that sold him his lantern.

Wespath Benefits and Investments, The United Methodist Church’s pension agency, has invested some $30 million in enterprises such as d.light that provide solar-powered lighting and home kits for people who live off the electrical grid.

The investment in solar lights is just one way Wespath seeks to live out church social teachings while carrying out its fiduciary responsibilities to United Methodist clergy and other investors.

Here is another. Wespath has joined 13 other global investors in launching the Transition Pathway Initiative, an assessment of how companies are making the transition to a low-carbon economy. Carbon dioxide, as a heat-trapping gas, is one of the main contributors to climate change.

The focus on reducing carbon emissions — both on the ground in individual homes and on the global scale of multinational businesses — is not only about supporting creation care. Wespath staff members say planning for a low-carbon future also makes good financial sense.

Wespath is the largest publicly reported faith-based pension fund in the world and among the top 100 pension funds in the United States. The agency manages benefit plans for more than 100,000 participants, including United Methodist clergy and lay employees. It also manages the assets of United Methodist-affiliated endowments, foundations and other institutions.

“The prudent fiduciary in us has to realize how the world around us is changing and position our investments to respond to that,” said Kirsty Jenkinson, Wespath’s managing director of sustainable investment strategies. “The transition to a low-carbon economy is already underway.”

Even with President Trump’s expected changes to U.S. environmental policy, Jenkinson said she expects that transition to continue unabated.

“We believe it is being driven by global public policies, by technology changes and by the physical impact of a changing climate,” Jenkinson said. “They are all drivers that provide us with risks to our investments but also great opportunities.” 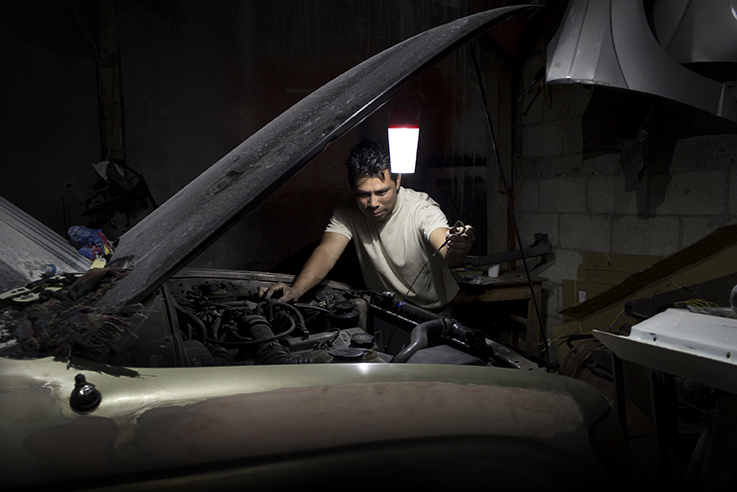 A mechanic in rural Guatemala works by the light of a d.light solar lanter. The social enterprise provides solar lighting in places without access to electricity. Photo courtesy of d.light

Among those opportunities are new solar companies such as d.light that are seeking to provide low-carbon solutions for a pressing need.

About 1.1 billion people — mostly in Africa and Asia — still live without access to electricity, according to the World Bank. For their energy needs, these individuals often depend on burning the highly flammable fossil fuel kerosene.

United Methodists have been involved with efforts to expand solar power into off-grid communities for a while. In 2013, members of Los Gatos United Methodist Church in California’s Silicon Valley, received White House recognition for their project Lighting for Literacy.

People pay for the solar lights and kits in a variety of ways. For example, d.light, founded in 2007, uses a “PayGo” model similar to that used by some mobile phone companies. People lease their solar home systems and make interest-free payments using mobile money to keep their device unlocked. Once the device is paid off, it’s unlocked forever.

Other solar companies operate more like a power utility with rates determined by usage.

In recent years, more than 100 million people who live off the grid have moved away from kerosene and other fossil-fuel sources for energy, reports the World Bank’s Lighting Global and the Global Off-Grid Lighting Association.

Today, in places where no power or telephones lines thread the landscape, families use a solar cell to charge mobile phones, power television sets and brighten their businesses.

Lohmeier said part of the appeal for Wespath is that this is a young industry.

“We take pride in being a thoughtful leader in finding projects that meet our investment needs but also push the industry in new directions,” he said.

Wespath Benefits and Investments has released its 2015-2016 Sustainable Investment Report. Wespath incorporates the consideration of environmental, social and governance factors into investments and in the selection of external asset managers. The agency see these efforts as promoting long-term value while having a positive impact on the environment and society.

The United Methodist Church, in its official teachings, urges members to care for God’s creation and identifies climate change as a threat to that creation, especially to people already struggling with poverty.

“The adverse impacts of global climate change disproportionately affect individuals and nations least responsible for the emissions,” the denomination’s Book of Discipline states.

The Discipline calls for energy conservation and the development of renewable energy sources. It also calls on governments, businesses, congregations and individuals to reduce emissions of greenhouse gases.

The Transition Pathway Initiative, which includes Wespath and a group of European institutional investors, is in line with that call. The initiative treats climate change not only as a human-rights issue but also as a business challenge. The investors anticipate that if a company does not make the transition to reduce emissions, it won’t be a very good investment in the long run.

Using calculations from the London School of Economics, the initiative tracks how companies manage their greenhouse-gas emissions. It also evaluates how companies’ predicted carbon performance compares with the international targets set in the 2015 Paris Agreement. The results of the assessment are at www.transitionpathwayinitiative.org.

So far, the assessment has looked at 40 energy companies and electrical utilities. The plan is to expand by the end of the year to 200 companies, including auto manufacturers and other carbon-intensive businesses, Jenkinson said.

Wespath will use the assessment in discussions with its external investment managers and in its engagement with companies shown to have more work to do.

The hope is the assessment will encourage companies to look at their standing compared to their peers and see how they can move forward.

Among the partners in the initiative is the Church of England’s investment bodies and other funds in Europe. Wespath is the only U.S. institutional investor involved, but Jenkinson said other major U.S. investors such as California’s CalPERS, the largest U.S. pension fund, have expressed interest in using the assessment.

Jenkinson said she sees both the investments in solar lighting and the Transition Pathway Initiative as two different ways of addressing climate change.