In a state checkered by rival yard signs, a United Methodist megachurch held a forum on faith and abortion seeking to find common ground.

The July 27 town hall before a packed house at the United Methodist Church of the Resurrection in Leawood, Kansas, came less than a week before Kansans head to the polls to decide whether the state’s constitution protects the right to an abortion.

Kansas is facing the first such state constitutional amendment vote since the U.S. Supreme Court on June 24 overturned Roe v. Wade, ending federal protection for abortion rights under the U.S. Constitution. A vote “no” on the Kansas amendment equals support for abortion rights, while a vote “yes” opens the door to more state restrictions with less judicial scrutiny.

“You’re not going to hear me say, ‘This is how you should vote on Aug. 2,’” the Rev. Adam Hamilton, the church’s senior pastor, told an audience of nearly 700 people in person and 4,500 online.

“What I do hope is that you better understand people in different places and you understand the issues.”

He added that he also hoped Kansans could find places where they agree and, even amid strong disagreement, they could still love their neighbors with opposing signs on their front lawns.

The evening forum featured mostly women speakers including two medical doctors, a U.S. federal judge and a former Kansas legislator who all brought their expertise on the health and legal issues involved in abortion. 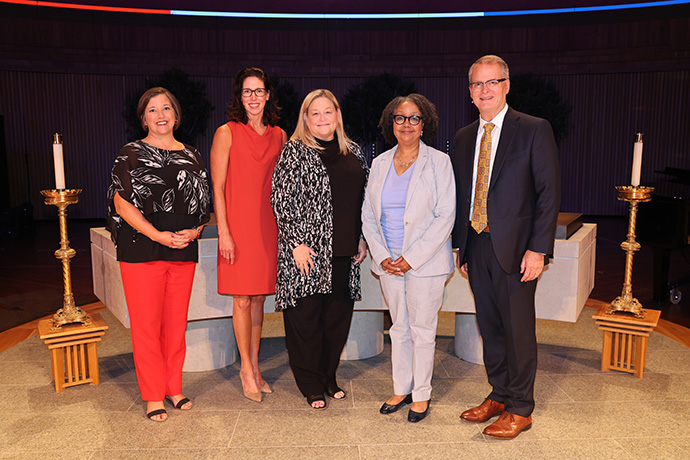 Dr. Michelle Lentell, an obstetrician/gynecologist, offered a refresher for many in the audience on embryonic and fetal development, outlining the different stages from a one-celled zygote to a crying, healthy newborn baby. She also noted that the American College of Obstetricians and Gynecologists estimates as many as 26% of all pregnancies end in miscarriage — most occurring before women know they are pregnant.

Dr. Brenda Shoup, a gynecological oncologist, explained how various forms of birth control work. She also discussed the various ailments and abnormalities that would lead doctors to recommend the termination of a pregnancy.

“These are very difficult clinical scenarios because these are most commonly wanted pregnancies,” said Shoup, whose husband, Glen, is one of the church’s pastors. “But as a medical professional, we have to at least offer them termination of this pregnancy.”

The forum also included videos from local leaders on different sides of the issue, as well as testimony from two Church of the Resurrection members — one who volunteers at a Planned Parenthood clinic and one who volunteers at a pregnancy crisis center across the street. Both church members saw their ministry as providing a listening ear and a helping hand to women in crisis.

The overall message was that in a debate often characterized in stark black and white, there is a lot of gray and a lot of overlap.

That overlap was evident in the results of an online Church of the Resurrection survey to which 4,393 people responded. Women comprised more than three-quarters of the survey’s respondents.

The United Methodist Church of the Resurrection has posted the video of the July 27 forum on faith and abortion at this website.

The Rev. Adam Hamilton, the congregation’s senior pastor, is not the only United Methodist leader seeking to address the coming state constitutional amendment vote in Kansas on Aug. 2.

A group of 30 Kansas clergy, including at least 19 United Methodists, published a commentary in The Wichita Eagle explaining why they are voting “no” on the amendment, which is called Value Them Both.

The United Methodist Church’s official position on abortion in the Book of Discipline states: “Our belief in the sanctity of unborn human life makes us reluctant to approve abortion. But we are equally bound to respect the sacredness of the life and well-being of the mother and the unborn child.”

The Book of Discipline’s Social Principles go on to assert, “We recognize tragic conflicts of life with life that may justify abortion, and in such cases we support the legal option of abortion under proper medical procedures by certified medical providers.”

In the church poll, people could choose one of 13 positions on abortion policy that best described their personal views. Each of the positions showed gradations from supporting absolute bans to allowances for no restrictions on abortion. Only 1% said they believed abortion is wrong in all circumstances, even to save the life of the mother. Only 11% of respondents supported a legal right to abortion throughout pregnancy.

Most fell somewhere in the middle — supportive of exceptions to outright bans or at least some restrictions. Hamilton said the position that garnered the most support — at 23% — was, “I believe abortion is wrong, but I should not be legislating that for other people.”

However, there is strong disagreement on just what the amendment before Kansas voters will accomplish legislatively.

However, years before Dobbs, most states had at least some abortion restrictions on the books that have faced no legal challenge. Kansas is among them.

“Every state is its own sovereign government,” said U.S. District Judge Julie A. Robinson, a founding member of Church of the Resurrection. “Every state has the right to enact its own set of laws.”

Robinson gave an overview of where things stand legally in the state of Kansas. Among other regulations, Kansas already bans abortions after 22 weeks unless to save the life of a mother.

The amendment before voters does not change the state’s ability to regulate abortions, Robinson said. “What does change is the standard of judicial review,” she said.

Stephanie Sharp, a former Kansas legislator and longtime Church of the Resurrection member, agreed that the constitutional amendment would give the state legislature much more leeway in setting abortion policies with less risk of a court overturning it.

Mainly, she urged eligible Kansans to vote. “When 34% of us turn out, it only takes 17.01% to win,” she said. “So when a small minority of the electorate votes, an even smaller part of the electorate makes the rules for the remaining 80% of us.”

Toward the forum’s conclusion, Hamilton shared some more information from the church’s survey. Out of the nearly 4,400 who responded, roughly 1 in 10 said they had an abortion. Some of the women said they regretted it. Others said they were grateful for legal access to abortion because they needed it at a difficult time in their life. Hamilton recounted that some of the women saw abortion as their only way to escape domestic violence.

Hamilton also read from one letter that he included in his book “Seeing Gray in a World of Black and White.” He told those gathered that the woman who sent the letter had gotten pregnant at age 17 and had refused an abortion as her father demanded. Instead, she and her boyfriend dropped out of high school, married and kept the baby. The marriage ended after 12 years. Hamilton asked the woman if she regretted going through with the pregnancy.

“Yes, my life changed dramatically due to the pregnancy prior to marriage,” she wrote. “But to this day, that child has been the greatest blessing to me and thousands of other people.”

Hamilton choked up as he read the passage, acknowledging this was his mother writing about him.

The senior pastor described his own views as “pro-life with a heavy heart.” He admitted that he hasn’t voted yet on the Kansas amendment, and he still has questions.

“But I do know when it comes to abortion, we’ve got room to talk,” he said. “And there’s some gray in there. And the more we talk, the more we listen and the more we learn, the better we are at being followers of Jesus and being authentically human for people in hard situations.”

The Rev. Myra Maxwell, co-pastor of Trinity United Methodist Church in south Philadelphia, also heads up victim support services for the district attorney’s office. She’s already walked in the steps of many of the people she counsels, as a crime victim herself.
Annual Conferences