The United Methodist Church has taken an active role in the campaign to reduce domestic violence in the country.

In observance of Domestic Violence Awareness Month in October, two workshops were held in Harare and Mutare, where 145 clergy and church leaders from the 13 districts in the Zimbabwe Episcopal Area were educated about gender-based violence and how they can be involved in fighting it. 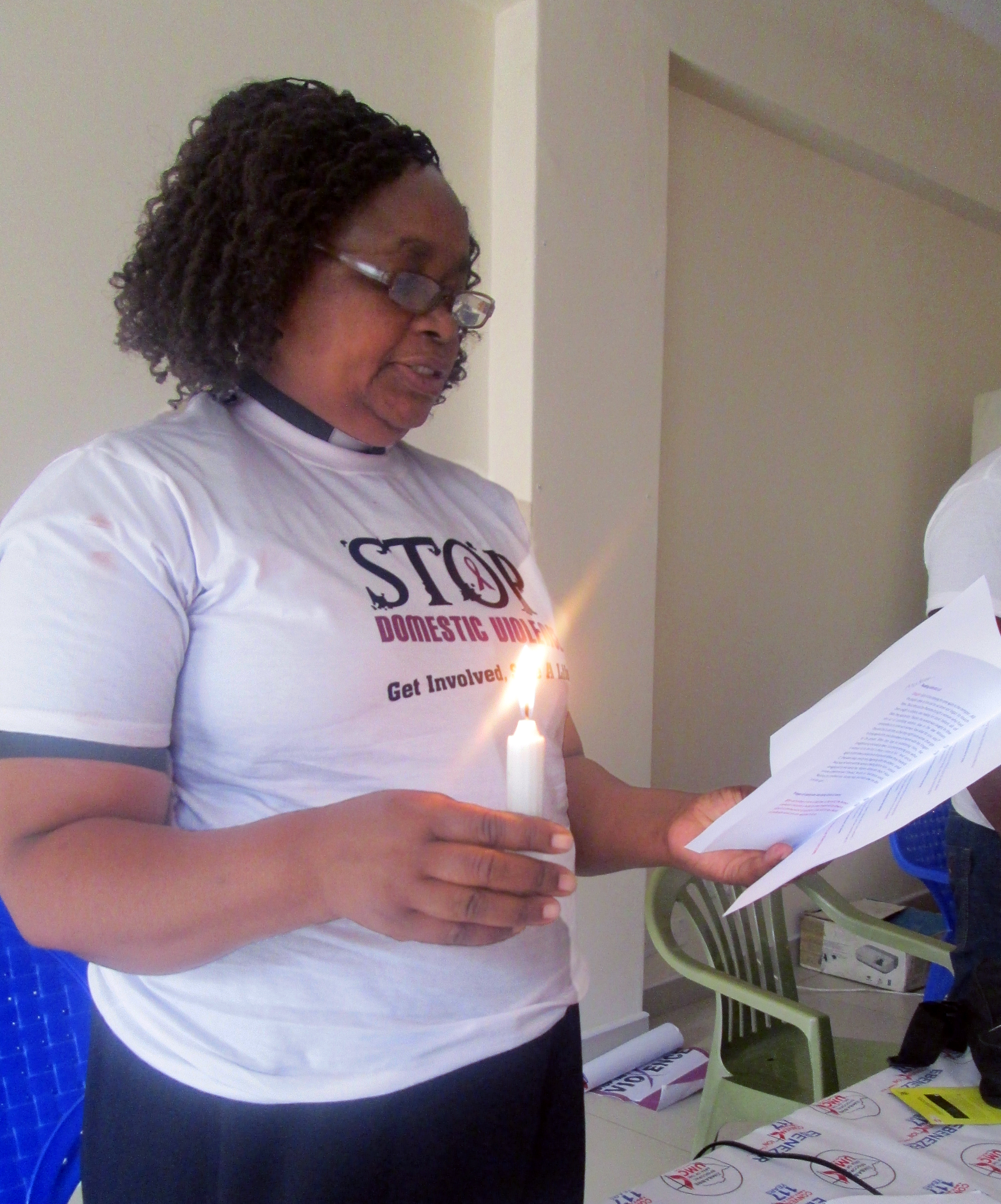 The Rev. Vienna Mutezo leads a Call to Prayer and Candlelight Vigil in memory of those affected by domestic violence at a workshop sponsored by United Methodist Women. Photo by Eveline Chikwanah.

“I wish they could be replicated throughout all the denominations in Zimbabwe. The church should have been doing this a long time ago, but it is good that it is finally recognizing it has an important role to play,” he said.

Religious denominations were not involved in the crafting of the country’s Domestic Violence Act (Chapter 5:16), a 10-year endeavor that went into effect in February 2007.

Gender activist Nakai Godfrey Nengomasha said churches were not included as official referral pathways under the act due to an attitude of indifference.

“The problem with the church is that of disentanglement when laws are being made and debated in Parliament. Members of Parliament cannot impose on the church since it is a voluntary organization,” Gunda said. “However, as the church already occupies the place of a referral for many people on other issues, it can still play that role without official recognition.

"For this to work well, the church must be competent in dealing with cases of gender-based violence in a way that compliments and does not undermine the Domestic Violence Act.”

Under the act, domestic violence is defined as “any unlawful act, omission or behavior that results in physical or mental injury or death.” This includes physical, sexual and economic abuse, abuse of the elderly and stalking.

Domestic violence is a major cause for concern in the country, said Gunda, with 68 percent of women in Zimbabwe having experienced some form of violence, ranging from economic and psychological to sexual abuse and battering, according to statistics.

“About 60 percent of murders which occur in the country are attributable to domestic violence,” he said. “Of the reported cases of domestic violence, more than 95 percent are those involving violence perpetrated by men against women and girls.”

The majority of domestic violence cases against men generally go unreported, he added. “This is due to the social humiliation meted out on such men when they cry out for help. Men would rather suffer in silence in order to maintain their reputation in the community.”

The Rev. Hebert Mumvuma, a United Methodist pastor in the Chitungwiza-Marondera district, said the church provides counseling and pastoral care to survivors of domestic violence.

“If they have suffered injuries, the church at times assists with money for hospital and medical bills, and we advise them to make a police report,” Mumvuma said.

“The UMC has an advocacy unit through its Church and Society committee to help society and individuals to desist from violent conduct that destabilizes the family unit.”

The church currently has no safe havens for survivors of domestic violence but works with other church-related and non-governmental organizations that provide such facilities.

“In cases where children are left without parents as a result of domestic violence, the United Methodist Church offers them protection and care through various children’s homes in the episcopal area. The church also participates through donations in cash or kind toward the upkeep of the survivors,” Mumvuma said.

“I discovered there were some situations which society deemed to be right within a marriage but were actually defined as abuse under the Domestic Violence Act. Everyone has a role to play. You cannot stand on the sidelines. I learned that you can assist cases of abuse even where the victim is not willing to file a complaint with the police,” Mironga said.

The theme of the workshops was “STOP Domestic Violence. Get Involved. Save a Life.” The workshops were conducted in conjunction with the Ecumenical HIV and AIDS Initiative in Africa and the World Council of Churches.

Rebecca Gurupira, United Methodist Church Ministry with Women, Children and Youth coordinator for the Zimbabwe Episcopal Area, said she is grateful to United Methodist Women for sponsoring the workshops.

In its Social Principles Paragraph 161.G, The United Methodist Church denounces domestic violence. “We recognize that family violence in all its forms — verbal, psychological, physical, sexual — is detrimental to the covenant of the human community. We encourage the Church to provide a safe environment, counsel and support for the victim. While we deplore the action of the abuser, we affirm that person to be in need of God’s redeeming love.”

Zimbabwe will join the rest of the world in commemorating the United Nations’ 16 Days of Activism Against Gender-Based Violence Campaign, held from Nov. 25 to Dec. 10 annually.