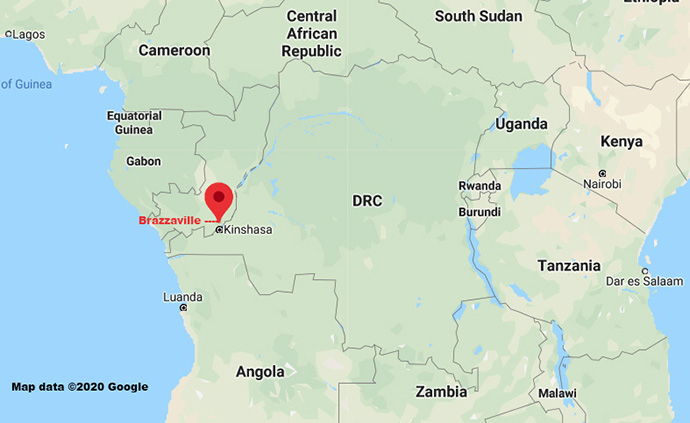 Central Congo Bishop Daniel Lunge is extending his evangelism efforts across the Congo River to help establish a United Methodist presence in the Republic of Congo.

The bishop met with Christian Ntondele, a graduate of Cameroon’s Protestant University of Central Africa, in Kinshasa on Feb. 13 to talk about the next steps in bringing the first church to this central African country, also known as Congo-Brazzaville or the Congo Republic.

Brazzaville, the capital, is on the Congo River opposite Kinshasa, the capital of the Democratic Republic of Congo, where Lunge serves.

The Rev. Collins Etchi Ako, a United Methodist Board of Global Ministries missionary assigned to the East Congo Episcopal Area, initiated the meeting between Ntondele and Lunge.

He said the bishop had expressed a desire to evangelize in the neighboring Republic of Congo. Ako, originally from Cameroon, also is a graduate of Protestant University, where he met both Lunge and Ntondele at different times.

Speaking during the meeting with the bishop, Ntondele expressed his gratitude for the opportunity and shared his passion for bringing the church to his region.

He was introduced to The United Methodist Church by Nathanael Ohou of Cote D’Ivoire, one of his lecturers at Protestant University. After spending a few years in Cameroon during his studies for his masters and doctorate in theology, Ntondele said he returned to the Republic of Congo with “a very strong determination to start The United Methodist Church in his home country.”

He brought the Cameroon United Methodist Church hymnal, liturgy for Holy Communion and the Book of Discipline along with him, convinced, he said, that someday he would need the documents to start a United Methodist gathering in Brazzaville, where he now lives.

“Today, we have a small group in Brazzaville, which meets for prayers and Bible study on weekdays in a small room,” he said, adding that they are working toward finding a bigger worship space to accommodate new members.

Ntondele said the group had started the process of legalizing The United Methodist Church in the Republic of Congo but stopped to get guidance from the Central Congo Episcopal Area. He said the new church plant has all the documents needed to restart the legalization process.

“I believes this encounter with Bishop Lunge is according to God’s plan as I look into the future with hope. It is like a dream coming true. As I go back, I will not take much time before sending my updates and this will allow us to go to the next step,” Ntondele said.

Lunge noted the need to train more people to expand the church’s presence. “The harvest is big, but the laborers are few,” he said.

Lunge shared important information about The United Methodist Church’s structure during the meeting and noted that the new church would need at least 35 baptized members, including a youth leader, men’s leader, women’s leader and finance committee, for it to be called a local church.

Citing one of his former professors, Lunge said, “We do not create the church, but the church is birthed when we have people gathering together to pray and study the Bible.”

He encouraged Ntondele to work toward winning more souls to Christ and inviting them to be part of this new group of believers. He also urged the group to stay in touch with the episcopal office as they work toward their goal.

The Rev. Simon Kalimo, director of evangelism for the Western Congo Conference, promised his support to the new church plant in Congo-Brazzaville. “It will be a pleasure for me to help this project be a reality,” he said.

The president of the board of ordained ministries for the Western Congo Conference, The Rev. Mukondi Bienvenu, thanked Ntondele for deciding to meet with the bishop before proceeding with the legal process. “You made a good decision to cross the Congo River in order to meet the bishop and discuss with him before proceeding,” he said.

At the end of the meeting, Lunge promised to walk alongside Ntondele and his group.

“Go, you have my blessings and my support,” he said.

Omadjela is a communicator for the Congo Central Conference and a field project manager for United Methodist Communications.