The water situation is exposing the school’s 516 students, 22 staff members and the community of more than 5,000 people to waterborne diseases.

“The situation is pathetic and has affected the school socially and academically,” said acting headmaster Nyasha Mbofana. “I am fearing for an outbreak of waterborne diseases, failure of students to attain good results in practical subjects or losing my staff members.”

There currently are two wells on campus. The deep well’s pump is broken, and the shallow well can’t meet the demands of the school and community.

Mbofana said the school needs about $30,000 for improvements, including drilling a borehole, repairing and expanding the school’s solar power system and buying library books.

“I am appealing for well-wishers from all walks of life to move in swiftly to avert the deteriorating situation sooner (rather) than later,” Mbofana said, adding that he’s concerned that the situation will worsen in November before the rainy season begins.

The school also is challenged by early childhood marriages, students traveling long distances (often more than 7 miles) and abject poverty, all of which affect academic performance, he said.

“Indeed, there are multiple challenges … the unavailability of water at Chapanduka has terribly affected the practical lessons and children’s concentration in class,” he said.

“We witnessed children bringing each two liters of water containers from home for washing hands after the use of the ablution facilities, drinking and watering the garden, yet some would be coming from very far.”

The other option, he said, is for them to spend time they could use for study and class standing in line to fill a bucket of water from a shallow well.

Musayemura Gwenukwenyu, a member of the community with a child in Form 4, called the situation desperate.

“Teachers are fetching water away from school premises,” she said.  “I am pained to see staff members carrying a 20-liter water container now and again. Our wish is for an immediate solution is to harness donkeys on scotch carts and fetch the water for them, but we do not have a scotch cart or donkeys. We are stranded on how best we can be of any help.” 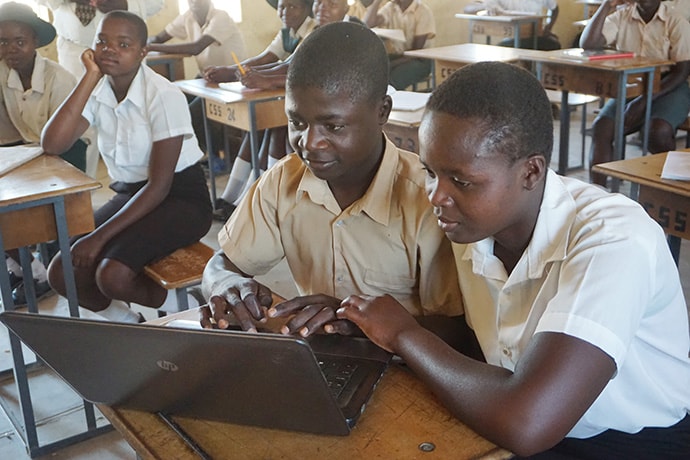 Mbofana said the poverty in the community affects girls especially, noting that girls represent only 46 percent of the school’s enrollment, despite outnumbering boys in the country.

“In a dire situation, to avert the suffering, the girls enter into early childhood marriages,” he said.

“The common religions and culture in the area promote polygamy, and girls as young as 13 years can easily be married to a married man, which is worrisome,” he said.

The water shortage also has been particularly hard on girls, noted a female student who preferred to remain anonymous.

“When menstruating, you may spoil and need to clean up, but when there is no water it becomes a challenge,” she said.

After it acquired the school in 2005, the church has appointed a station chair/chaplain to help students who are facing hardships.

“My work is to provide counseling and spiritual growth to both the students and staff members,” said pastor Fungisai Gomana.

She noted that two non-governmental organizations, Campaign for Female Education and Tariro, also have helped by donating bicycles and paying school fees, respectively.

“I am happy that our efforts have paid dividends, as there is a remarkable improvement in the behavior change of students. In 2017, 10 girls succumbed to early marriages, and since then, only five,” she said.

She said the bike donations have enhanced mobility and motivated the girls who travel long distances to school.

The bicycles went to seven girls from the farthest areas. After completing their O-level exams, they will pass the bikes on to others who live far away and the process will repeat.

Blessing Jori, a Form 4 student, was grateful to be one of the beneficiaries of the bicycles.

“I used to travel 12 miles to and from home, arrive at school late and tired because of the long journey walked by foot,” said Blessing. “Now, I am happy that all has changed for the better. I now enjoy my education.”

For more information about ways to support Chapanduka Secondary School, reach out to the Rev. Pauline Nyamudzura at [email protected].

She said she handles the bicycle with care so it will be in good condition for the next beneficiary.

The Rev. Pauline Nyamudzura, Marange District superintendent, said her major concern at the school is the drop in the number of students who passed their O-Level exams, from 13.67 percent in 2017 to 11.6 percent last year.

“The drop is worrisome,” said Nyamudzura, “and this might be caused by failure to pay school fees, which subsequently affects the purchasing of text books for the library. Also, a lack of electricity due to the damaged solar system affected the night studies.

“If we can address the two, I hope the performance can improve,” she said.

Chief Firikanosi Chapanduka said despite the challenges the school is facing, he has been impressed with how the church is running the school and the school’s relationships with local leadership and the communities at large.

He said his wish is to develop the school from O’Level to A’Level and into a boarding school, as well as improving the water challenges. He noted that children after O’ Level must travel long distances to the nearest high school, which is more than 17 miles away.

“As a leader,” continued Chapanduka, “I will help to encourage the community to pay school fees so that the school can develop.”

The Rev. Duncan Charwadza, conference connectional ministries director and deputy administrative assistant to Bishop Eben K. Nhiwatiwa, said despite all of the challenges, there are bright spots at the school.

“The school (has) 22 qualified staff members. The girls are the running champions in soccer at district level with two girls playing for the national team,” he said. “The school enjoys a very sound relationship with the surrounding communities. They have a state-of-the-art management complex constructed by the church.

“With all these and addressing the aforementioned challenges,” he continued, “there is great potential for the school to develop to greater heights. … This is just the beginning for greater things to come.”

Chingwe and Chikwanah are communicators for the Zimbabwe East Conference.

Name and membership rules will be different but push for inclusiveness remains.
Evangelism