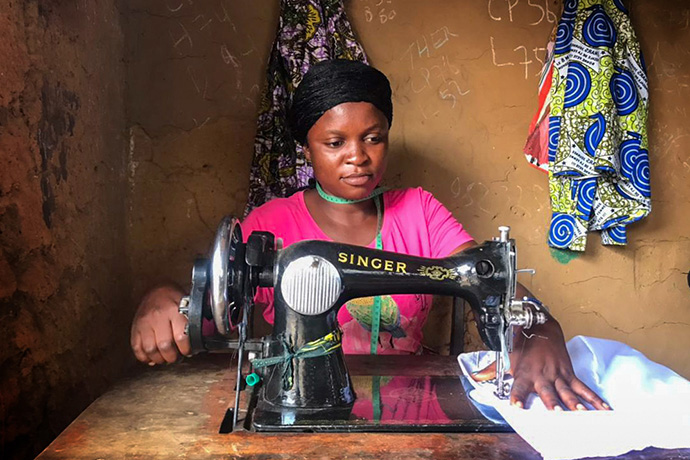 Henriette Kibibi, 22, sews uniforms in her workshop near Kindu, Congo. Kibibi, a mother of two, received vocational training at the Mama Lynn Center in Kindu that helps her support her family. Photo by Chadrack Tambwe Londe, UM News.

• The United Methodist Church built the Mama Lynn Center to give hope to sexually abused, widowed and vulnerable women of East Congo.

• Each year, the center invites dozens of women to learn various trades to ensure their economic reintegration into society.

• Vulnerable women and survivors of sexual violence become indispensable to their families, thanks to the trades learned at the center.

In the eastern Democratic Republic of Congo, women and girls trained at the Mama Lynn Center are supporting themselves and becoming indispensable to their families.

East Congo has been called the “rape capital of the world” — a place where rape is used as a weapon of war. To support women who are victims of sexual violence and those abandoned by their husbands and families, the United Methodist Church in eastern Congo established the center in 2018.

The Tennessee, Memphis and California-Pacific conferences joined with the East Congo Episcopal Area, raising funds to build the self-care center. Every year for more than three years, the center has mentored United Methodist pastors’ wives, women who have been sexually abused and those who have been abandoned by their husbands.

Once rejected by their families, the women have become leaders of the small businesses they have created after completing apprenticeships at the center.

“During each six-month session,” she said, “we teach the women various trades to provide for their basic needs. We teach them literacy, cutting and sewing, baking and cooking, religion and morality, soap making, home economics ... various trades that allow them to be financially independent in society.”

The center is a shelter that allows women to restore themselves and become essential in society.

“We train women who are really in difficulty, who do not know how to provide for themselves and who have been rejected in society,” Manafundo said.

Manafundo is also the wife of East Congo Bishop Gabriel Yemba Unda. The center is named for Lynn McAlilly, wife of Bishop William T. McAlilly of the Tennessee and Memphis conferences.

Henriette Kibibi, 22, is a Catholic. Abandoned by the father of her two children, she and her little family live in Kindu with her parents.

“It is not easy to live at home with my two children,” Kibibi said. “My family is not rich and fights every day for food. It is very difficult when my parents have to feed me and my children. Even though they are their grandchildren, they want every parent to be able to provide for their children's basic needs.”

After learning various trades at the center, Kibibi has become essential to her family and friends. She opened a sewing workshop. She also sells the soap and doughnuts she makes.

“In my neighborhood, I am the reference in the sale of soap and doughnuts,” Kibibi said. “Little by little, I have built a reputation in the sewing of various clothes. During the day, I am in front of my sewing machine and sell soap and doughnuts. In the evening, I start preparing the soap and doughnuts to sell the next day. My parents help me with the preparation.” 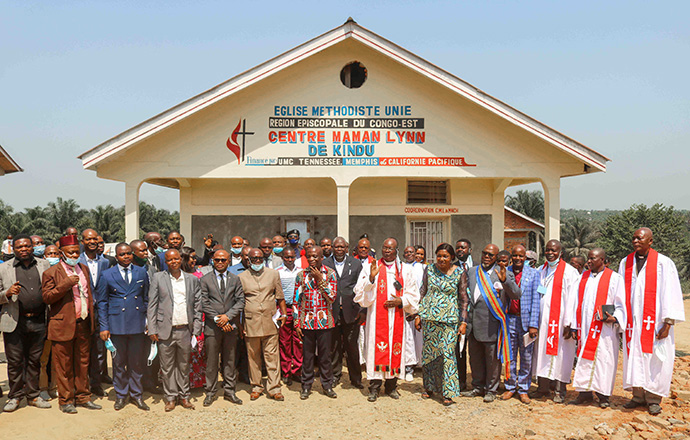 Church and community leaders gather for a photo in front of the Mama Lynn Center in Kindu, Congo. The center aims to give Congolese rape survivors and other vulnerable women a chance to heal and overcome the crippling stigma that makes them outcasts. Photo by Chadrack Tambwe Londe, UM News.

Her delighted parents are grateful for The United Methodist Church.

“Our daughter has become the pillar of the whole family,” said Pascaline Yafa, Kibibi’s mother. “Thanks to the money she has from her activities, she can support up to four days of food ration per week. She is able to send her child to school. It is Kibibi's soap that the neighbors buy to wash their clothes and dishes.”

Like Kibibi, many women and young girls have become indispensable to their families, thanks to the Mama Lynn Center. Manafundo said that more than 200 women and young people have been trained since the center opened.

“At the end of each session,” she said, “the trainees receive a rehabilitation kit so that they can start putting into practice the notions learned during our training sessions. It [contains] a sewing machine, wheat flour, vegetable oil, sugar, caustic soda for the manufacture of soap and others. In short, materials and inputs that allow women to start their small businesses.”

Ruth Kapilimba, 54, is from the class of 2021. She has eight children. Her husband died in 2011. Thanks to the training, Kapilimba created a small business near Kindu, where she lives with her children.

“I make soap, and it allows me to sell to the neighbors,” she said. “My soap is appreciated for its good quality. I also prepare bread, and I have a sewing workshop. All these activities allow me to earn enough money to feed my family without too much difficulty.”

Bishop Unda said the church has an obligation to train these women and give them the means to restart their economic lives.

“When these women finish, the church is working to give them the means to start a new life,” the bishop said.

The Week of Prayer for Christian Unity is an annual observance held January 18-25 in which all Christians everywhere are encouraged to pray for unity in love and mission.
Mission and Ministry

During the past 27 years, Reidland United Methodist Men and multi-denominational partners have built more than eight miles of handicap ramp. This month, the men’s ministry is on schedule to build its 1,000th ramp. The Tennessee-Western Kentucky Conference has the story.
Mission and Ministry