The proposals would also limit who the government would allow to serve as pastors.

Two amendments now in a Bulgarian Parliament committee have not yet made their way into the full body, but concerns are great that they could become law, said the Rev. Daniel G. Topalski, superintendent of the Bulgaria-Romania Conference.

“We are a country of many miracles and surprises,” said Topalski. “But, these nationalistic trends are everywhere across Europe. We are not an exception.”

The law was designed to curb influence from Muslim extremists outside the country, but opponents argue that these proposals would not achieve that end. Instead, the changes would seriously curb religious practice of both Protestants and Roman Catholics, according to opponents.

Here’s how the act could directly impact United Methodists in Bulgaria, Topalski reports: 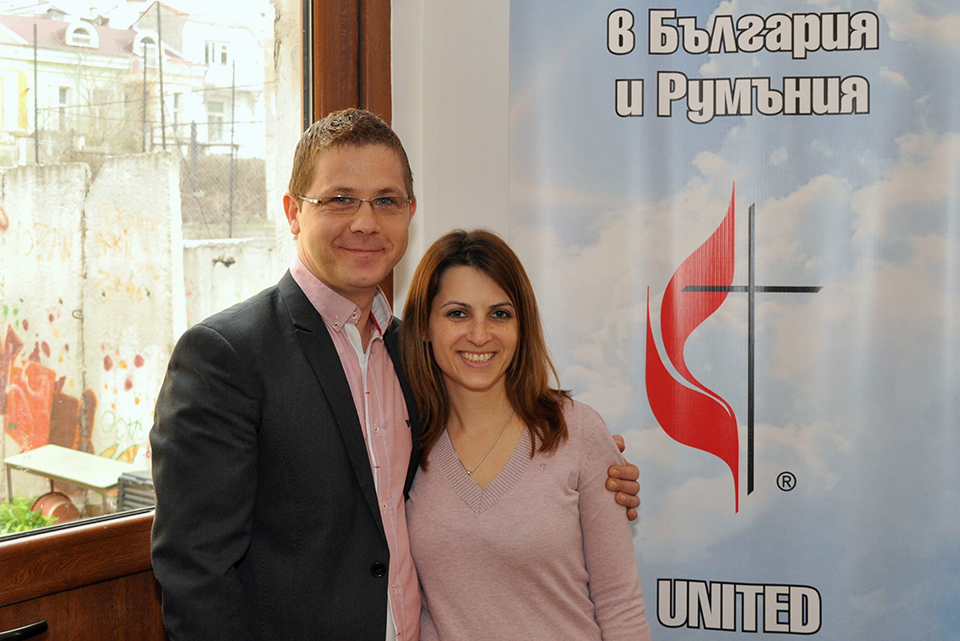 Pastor Mihail Stefanov, shown here with his wife, Mirela, is one of three current United Methodist pastors in Bulgaria who were educated outside the country. Under proposed changes to the Religious Denominations Act, only pastors who have been educated in Bulgarian theological institutions could serve. Photo courtesy of The United Methodist Church in Bulgaria.

Census counts of practicing Christians may be compromised because government officials don’t understand denominational groups, Topalski said. Being Christian in Bulgaria simply means being Orthodox in the popular mindset, he added.

Establishing national United Methodist seminaries in each country across Europe is not financially feasible, and that’s why the Methodist e-Academy was developed to train European pastors online, said David Field, program coordinator of the academy. Students earn a theology degree in their home country then receive online supplemental education from United Methodist scholars.

Five Bulgarian pastors have graduated from the Methodist e-Academy, and three more are in training. Under the proposed law, their studies probably would be identified as international because the academy is sponsored by Methodist groups in the U.S. and Europe and therefore could be considered inappropriate.

“The government would not be directly licensing pastors, but the effect would be the same,” Topalski said.

The Bulgarian Evangelical Alliance — representing 12 Protestant denominations, including United Methodists — has sent a detailed formal objection to parliament arguing that the amendments violate the national constitution guaranteeing freedom of religion.

The group’s chairman, Pastor Rumen Bordzhiev, wrote in the appeal, “It is inconceivable that our registered religious institutions would be separated from the European and world body to which they belong.”

Streiff said he is meeting with the Conference of European Churches and its specialist for religious liberty to advocate for United Methodist concerns. This group supports churches from multiple Christian denominations in countries across Europe.

Bulgarian Parliament members contacted for this story have not responded to requests for comment.

“We see in this proposal an attempt to cut off the ties between the Methodist church and our wider Methodist family abroad,” Topalski said. “We are a religious minority here. It’s important that we are part of a bigger religious family, not only in finances. All these connections are crucial for our survival and ministry.”

Whitehouse is a professor of Broadcasting and Electronic Media at Eastern Kentucky University and a Fulbright Scholar studying at Sofia University in Bulgaria.

Prison ministry in Bulgaria a ‘journey to another world’

An invitation to visit a prison, while initially uncomfortable, inspired one pastor to begin a now-thriving ministry to inmates that continues beyond prison walls.
Bishops