President Donald Trump’s proposed border wall could destroy a piece of Methodist history and disturb sacred burial grounds in this small rural area just a mile or so from the Rio Grande.

On the main road, two historic markers are the only signs that history lies down a two-lane road behind a grassy levee.

Trees and brush hide most of the view across from a pristine white chapel framed by a cross of shiny dark brown wood. About a mile or more on the other side is the border of Mexico and the river. 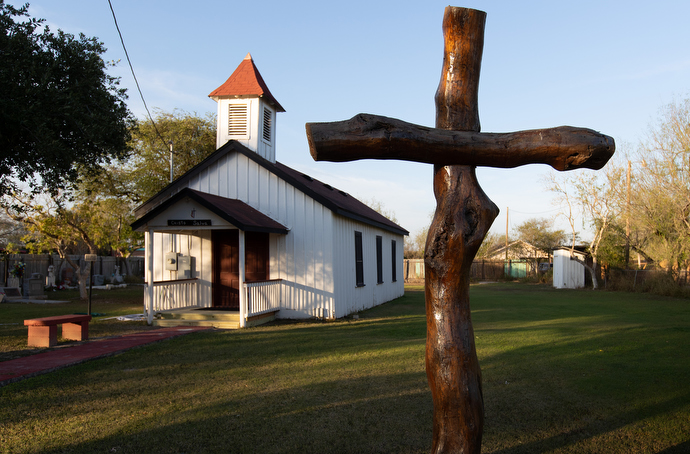 Jackson Chapel United Methodist Church in San Juan, Texas, is known as the first Spanish-speaking Protestant Church in the Rio Grande Valley. The chapel held services until it was flooded in 2008.

Descendants of the family who first came to this dusty Texas land are waiting to talk to fellow United Methodists about a place that is dear to them.

Ramiro, his wife, Melinda, and his sister, Sylvia Ramírez, all spoke to members of the United Methodist Immigration Task Force during the group’s Jan. 21-23 meeting in McAllen, Texas.

The Rev. Jeania Ree Moore, director of civil and human rights of the United Methodist Board of Church and Society and member of the task force, first connected the family with church officials when news of an historic Methodist site being threatened by President Trump’s proposed “border wall” reached her.

“Church and Society advocates for justice for immigrants, indigenous peoples, and other oppressed peoples, and the Jackson Ranch’s history and current reality in struggles for justice struck me as unique and important,” Moore said. 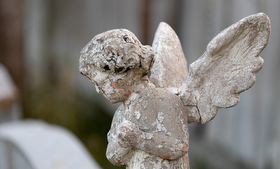 The family told the group about their fight to save the church and cemeteries. Ramiro is the great-great grandson of Nathaniel Jackson, a former white slave owner, and his wife, Matilda Hicks, a former black slave. The couple left Alabama to escape discrimination and found 5,000 acres of peace near the Rio Grande.

Ramiro said Nathaniel and Matilda grew up on the same plantation in Alabama, played together as children and fell in love as young adults.

At the ranch, a multicultural community thrived. Their land became part of the Underground Railroad helping blacks escaping into Mexico during the era of the Fugitive Slave Act. Mexican President Vicente Guerrero, who was of mixed descent, abolished slavery in 1829.

“I found it sadly ironic that this sacred place, which had been a haven for African-Americans fleeing slavery, could be destroyed to build a wall that would serve to shut out immigrants fleeing violence,” said Rob Rutland-Brown, executive director of National Justice for Our Neighbors. He is also a member of the United Methodist Immigration Task Force. 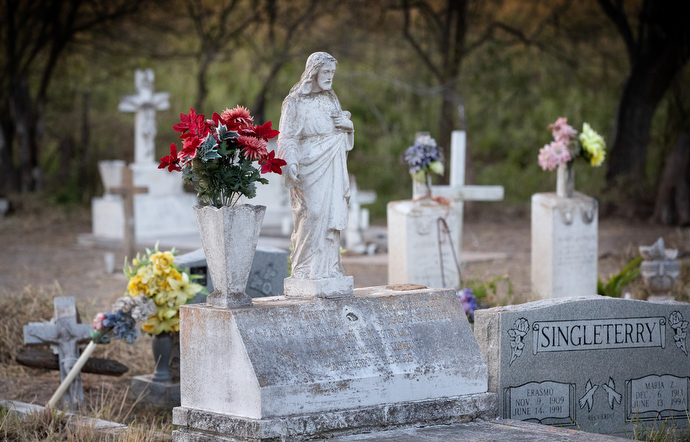 The Eli Jackson Cemetery in San Juan, Texas, is among historic cemeteries threatened by the proposed border wall between the U.S. and Mexico. Photo by Mike DuBose, UMNS.

“My hope is that with these (Texas) historical designations, it will help these sites to be preserved and not be destroyed by the potential wall,” she said.

Ramiro and Melinda have prepared for their burials with a large double engraved tombstone set under a shade tree in view of the little white Jackson Chapel. Ramiro lovingly restored the chapel after it flooded in 2008. He demonstrates the church bell and points out a historic marker next to the church that marks how far the border has shifted over the years.

The proposed border wall would derail their plans for a peaceful final resting place.

“But, until my visit to El Capote (Jackson Ranch), I have had never seen how the wall would destroy history, disrupting a place that is sacred for indigenous peoples, African-Americans, Spanish speakers and Methodists,” he said.

The Ramírez family has hired an attorney to represent them. The lawyer stated in a letter that the proposed border wall will cut off direct access to the sites for visitors interested in the historic significance of the two sites. It would also cut off family members who want to visit the site where loved ones are buried and might prevent future generations from being buried there.

“If the purpose of the wall is to protect the homeland, then this ‘no man’s’ land between the wall and Rio Grande River will result in unequal protection for the area,” the letter states.

The family was informed of plans to clear 150 feet south of the levee, which will most affect the Eli Jackson Cemetery since it lies adjacent to the levee, Ramírez said.

Two waivers have already been filed by the Department of Homeland Security to build walls nearby but not yet on the segment of the border which includes Eli Jackson Cemetery and the Jackson Ranch Chapel and Cemetery.

“We don’t know yet how we would have access to the area if a wall is built,” said Melinda Ramírez.

People from the Carrizo Comecrudo Tribe of Texas have been camping out in the Eli Jackson Cemetery for several weeks, clearing the burial ground and repairing tombstones. They believe the cemetery is also the resting place of several indigenous people.

The shadows grow long as the sun sets and a strong wind whips up more dust over land that has been watched over for hundreds of years by people called Methodist. 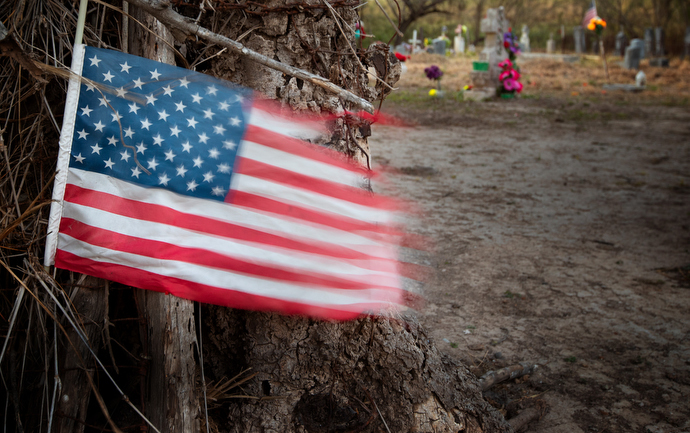 A U.S. flag flutters in the breeze outside the Eli Jackson Cemetery in San Juan, Texas. Descendants of the Jackson family are fighting to save the cemetery from being destroyed by a section of the proposed border wall along the Rio Grande.