United Methodist Mercy Hospital’s outreach program is transforming the lives of the poorest of the poor in Sierra Leone.

The program targets pregnant women, nursing mothers and children under 5 years old in remote communities where availability of health care and the ability to pay is a challenge.

“We test pregnant women for malaria, syphilis and HIV ... Positive HIV cases are put on medication to prevent mother-to-child transmission. Partners of positive cases are encouraged to do testing,” said Mohamed Khadar, outreach manager for the hospital.

For cases of malnutrition, he said, the children are supplied therapeutic food called Pikinmix (pikin means “child” in Krio).

“That lasts them for a month, so that they have enough food up to our next visit or when they come to see us at the hospital.”

Kadar said the outreach is making a difference in people’s lives.

He cites the case of “Baby Betty,” an infant from a Tikonko village who was severely malnourished when she came for treatment at 16 months old.

“She was sick with severe acute respiratory infections, was coughing severely and also had pneumonia. We treated her and put her on special diet,” Kadar said. “She is now over 2 years old and looks very healthy.”

Mamie Kabba, from another Tikonko village, was 7 months old when the team met her.

“She, too, was completely malnourished but now is very healthy (at 2 years old),” Khadar said.

“We do not have anything to give,” Alex Yambasu, Betty’s grandfather, told the magazine. “We named the second child Mercy to show our thanks.”

Augusta Kpanabum, chief nurse at Mercy Hospital, said the outreach team travels to remote areas to reach those most in need.

“(The team members) also make referrals to the hospital for severe cases, including pregnant women who face complications after delivery in the communities.” 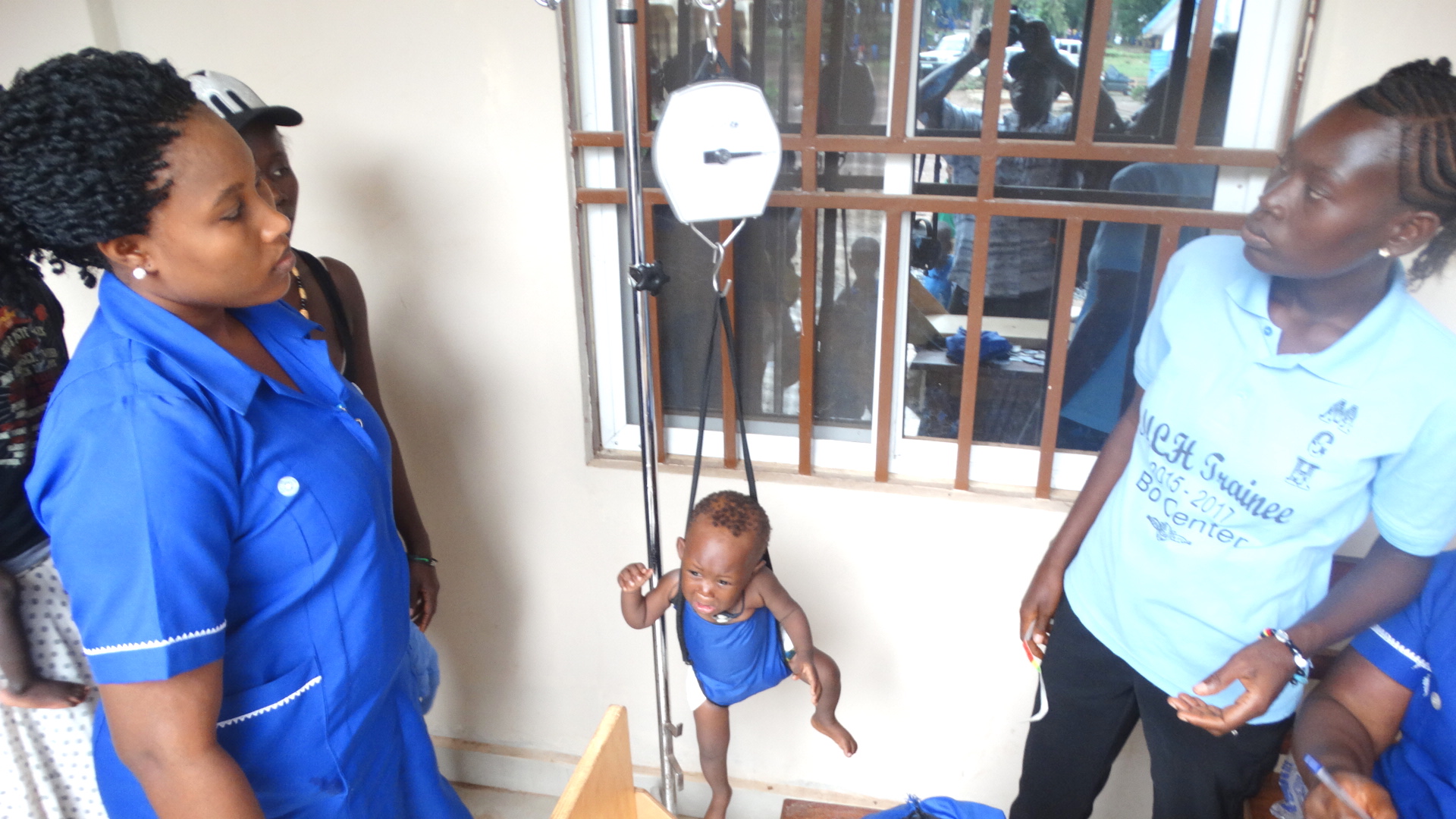 Staff at United Methodist Mercy Hospital in Bo, Sierra Leone, weigh a child during one of the hospital’s outreach days on the hospital grounds. Photo by Phileas Jusu, UMNS.

According to a 2017 United Nations Population Fund report, Sierra Leone has one of the world’s highest estimated maternal mortality ratios with 1,165 deaths out of every 100,000 live births.

Kpanabum said the outreach works to minimize cases of maternal and infant mortality rates in the deprived communities.

Donations can be made to Global Ministries’ Mercy Hospital Advance #15173A.


While the team is making inroads in care, they still face challenges, including issues with mobility, Khadar said.

One of the outreach vehicles is on standby for emergencies, and certain areas are only accessible by motorbike, especially during the rainy season.

The Mercy team is seeing an increase in HIV infection in the Bo district.

However, Mohamed Koroma, Mercy Hospital HIV coordinator, said the increase is likely due to the team’s vigilance in the communities and awareness efforts.

“The figures might not be practically going up but more tests are now being done, which unveil the true figures that have been lurking in the dark,” he said.

“People now have more access to information. We’re reaching out more into the communities and hence discovering more. Also, our care and treatment of HIV patients is encouraging more people to come and know their status.”

Infection rate among women is higher than in men because more women report for testing than men, he added.

“We test (the women) on antenatal days and also when we go on outreach in the communities because it is the women that bring the children to the clinics,” Koroma said.

The Bo Government Hospital also confirmed an increase in the HIV infection rate in the district. According to hospital data, on Dec. 1,  World AIDS Day, 88 new cases were discovered through voluntary counseling and testing — far outnumbering last year’s figures.

On World AIDS Day, Sierra Leone President Julius Maada Bio referred to AIDS as an existential threat and urged all to become activists.

He promised his government would eradicate economic barriers to accessing HIV testing and treatment services.

Khadar emphasized that Mercy Hospital is intensifying voluntary counseling and testing while encouraging the infected to bring in their partners for testing. The team is also expanding HIV education with a focus on putting an end to bad traditional practices that promote the spilling of blood.

Church members in the Chitungwiza Marondera District in Zimbabwe are studying and spreading God’s word in their communities with the help of international Bible study program.
Human Rights