The African American membership caucus of The United Methodist Church promised a “RESET for the Future” in the theme of its annual gathering — even as the denomination may be going through its own major reset following the 2019 General Conference. 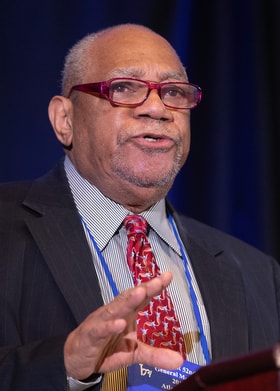 The Rev. William Bobby McClain gives a presentation on the "current reality of the black church." McClain is an original board member of BMCR and professor emeritus at Wesley Theological Seminary in Washington.

About 400 members of Black Methodists for Church Renewal looked back at their history during their 52nd annual meeting, held April 3-6, in Atlanta, Georgia. But they also tried to look toward an uncertain future for black United Methodist churches.

Some longtime leaders extolled the caucus’ dramatic birth in 1967-68 — and its goals to confront racism and demand justice and equity in the new United Methodist Church. Others challenged the caucus, and the churches it represents, to change with the times and reset to become more relevant and attractive to younger potential members.

Referring to the decades-old caucus motto, “Our Time Under God is Now,” keynote speaker the Rev. William “Bobby” McClain asked, “Time for what?” He recalled early black Methodist history and the denomination’s “checkered career” in addressing concerns of racial inclusion, especially since 1968.

McClain, a retired seminary professor and organizing member of BMCR, questioned whether “our African American relationship with The United Methodist Church is a genuine relation … or simply a sentimental affair that has lasted because neither could (or dared) to get rid of the other.” Yet, while citing the resilience of racial injustice in the church and society, he concluded, “We are not done yet, BMCR!” 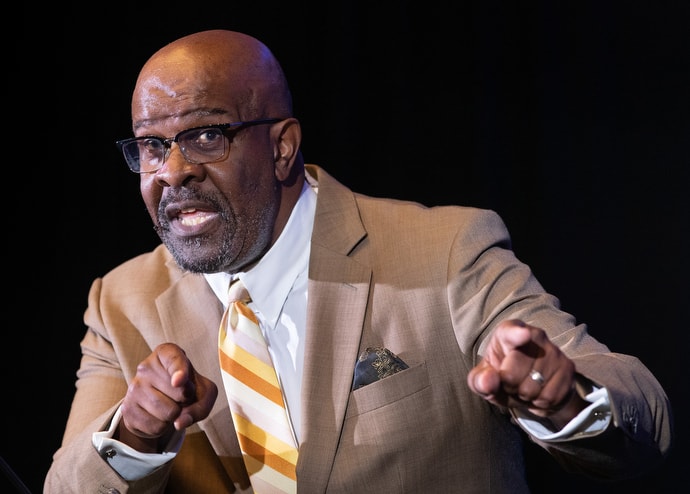 “Let me offer this confession as a bishop,” she told worshippers. “We have fallen short of the glory of God and not been faithful to our mission to making disciples. We’ve made our churches into museums and shrines rather than vital places of worship. Too many places have drive-by worshippers, who don’t stay and develop relationships with the community.” 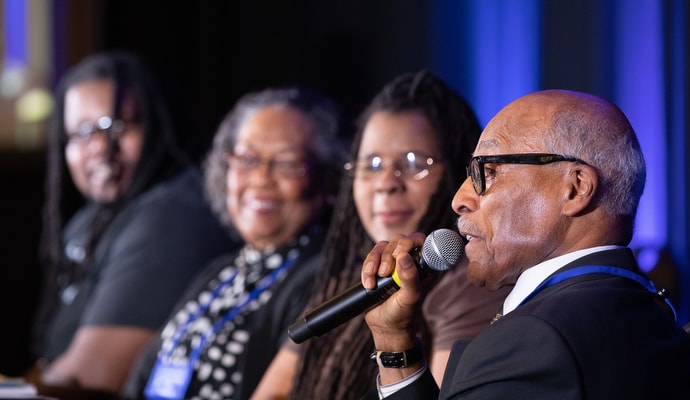 The Rev. Zan Holmes (right) joins other panelists in a discussion entitled "Voices of BMCR: Then, Now and Future." From right are: Holmes, Linda Furtado, Mollie Stewart and Brennen Boose.

“Things are not well in the black church,” she lamented. “Black churches are closing at alarming rates, our church buildings are falling down around us, our children and grandchildren are worshipping elsewhere or nowhere, the voices of black clergy and laity are still not respected on conference committees and general church boards and agencies. And when we bring up racial issues at meetings, we are called angry black men or women.

“Our ordination candidates are not making it through boards of ordained ministry,” she continued. “Black pastors are still not welcome in many of our pulpits, and black bishops are not accorded the same privileges and respect as our white colleagues.” 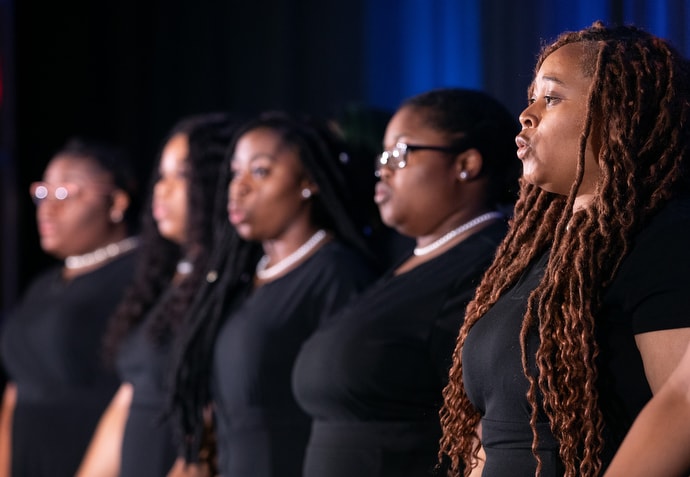 Members of the Bennett College Choir sing during a luncheon to benefit the United Methodist Black College Fund.

One of four black women elected bishop in 2016 — an unprecedented number — Moore-Koikoi acknowledged the presence of black leadership across the general church and credited BMCR for its contributions to racial progress. However, she said, “somewhere along the way we have been lulled into complacency. We’ve become discouraged and weary in doing good work. But now it’s time to stay woke.” 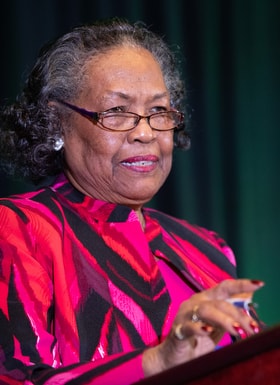 Mollie Stewart says that older people need to surrender leadership of the church to younger people.

The bishop joined other black episcopal colleagues — known as Ebony Bishops — in offering their critical take on outcomes of the denomination’s contentious 2019 General Conference, held Feb. 23-26 in St. Louis, as members wrestled with what black churches should do and where they should go if schism results and departing churches are allowed conditionally to take their property. General Conference, the denomination’s top lawmaking assembly, passed the Traditional Plan, which strengthens enforcement of bans on “self-avowed practicing” gay clergy and same-sex weddings.

A panel of veteran and young adult caucus members shared cross-generational perspectives on the caucus and its black churches.

“Older people in churches need to surrender leadership to young people. Somehow, we have to get that across to churches,” said Mollie Stewart, a BMCR board member and longtime, retired United Methodist church leader.

The Rev. Zan Holmes, another retired church leader, said older leaders get “so caught up in our positions, that we don’t want to make changes that can help us reach the communities we’re called to serve.” 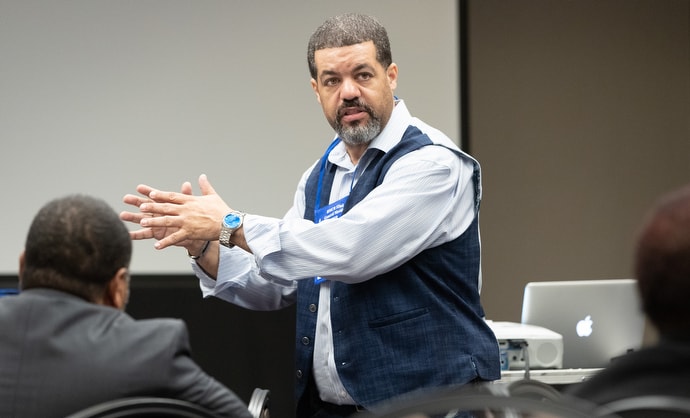 Pastor Benny Custodio of the Never Forsaken Re-Entry Ministry leads a workshop on the impact of mass incarceration.

Linda Furtado, a young media design specialist at the Upper Room in Nashville and millennial seminary student, said she has had to ask, “Aren’t I old enough?” to provide leadership in black churches she has attended.

Brennen Boose, a young online media and marketing professional and former BMCR board member who became involved in the caucus after attending a Youth Harambee event, asked what the church leaders are doing to address current realities. 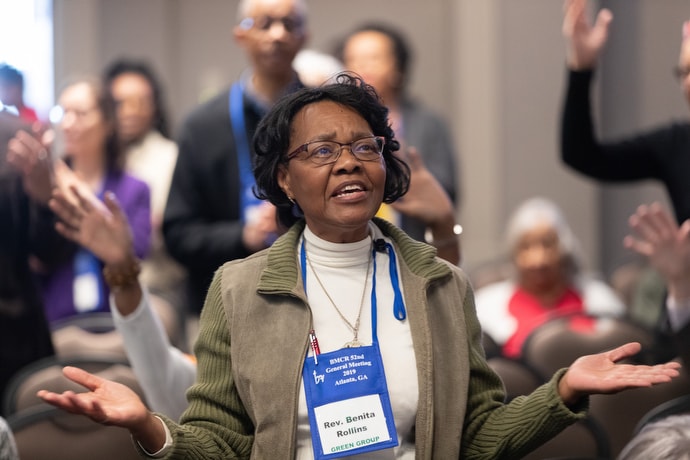 The Rev. Benita Rollins sings during opening worship at the Black Methodists for Church Renewal meeting.

“Older people say, ‘Do as I say.’ But young people have a problem with that,” said Boose. He cited a recent United Methodist Communications study revealing that older members value Scripture and tradition as their primary religious influences, while many younger people value reason and experience most highly. He also stressed the relevance of black hip-hop culture to many young people and urged that culture be used in worship and other faith expressions.

“Young people need to feel heard, included and appreciated,” he explained. “We have to find out how to communicate on their level, where Scripture alone is just not enough. You can’t just say ‘It’s in the Bible.’ Why is it in the Bible, what’s the context, and how should I apply that to my life?” 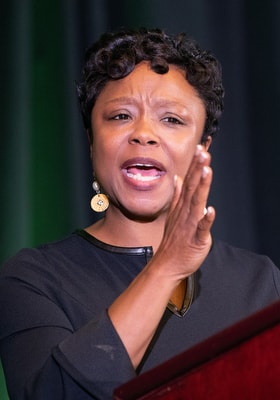 The Rev. Michele Watkins leads opening worship. Watkins is assistant professor of theology and religious studies at the University of San Diego.

Boose recently launched a website, www.blackmethodist.com, containing personal video narratives. He also wrote “An Open Letter to BMCR” in October 2018, described as a “love letter.” It calls on the caucus to reclaim its courageous, former mission to “agitate the conscience of the Methodist Church.” Invoking scriptures and the words of the Rev. Martin Luther King Jr., he challenged BMCR to become a dynamic, visionary change agent once again, rather than a “social club for the spiritual elite…”

The Rev. Michele Watkins, a theology professor at the University of San Diego, issued a similar challenge in her opening worship sermon. Asking members under age 40 to stand, she offered “an uncompromised confession” on behalf of the caucus—an apology for “allowing age, sex and a very limited imagination to keep us from serving God and loving you.”

The meeting also featured Bible study, a luncheon to celebrate the Black College Fund and supported institutions, and workshops on: 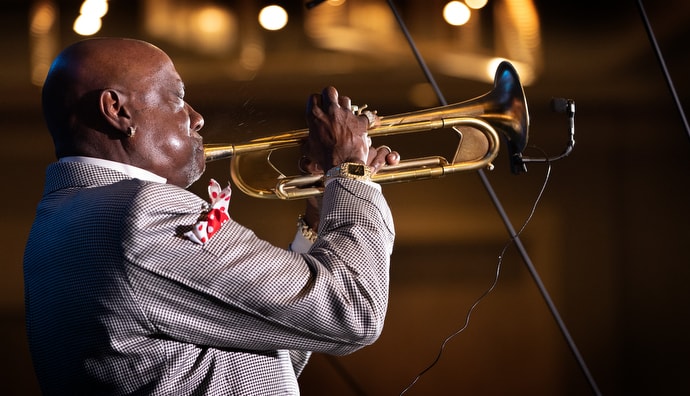 Jazz artist Milkshake Mayfield plays the trumpet during a gospel and jazz brunch at the close of the meeting.

In the days since video was released showing police officers savagely beating Tyre Nichols, United Methodists have joined in grief and prayers for Nichols and his family. They also called for the recognition of Black people’s humanity.
General Church