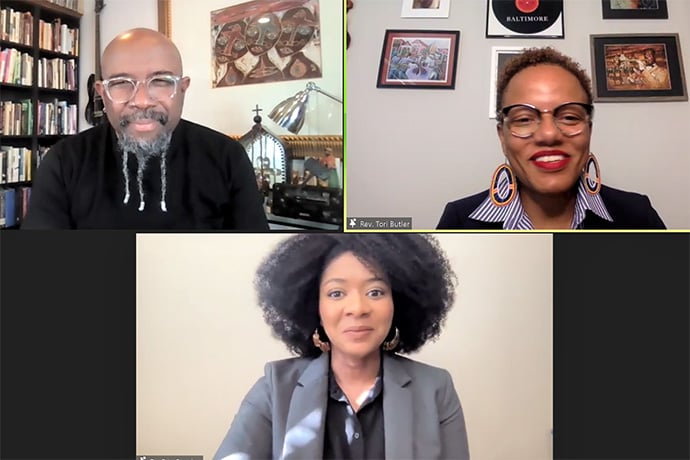 Co-authors of the book “I’m Black. I’m Christian. I’m Methodist” join in a panel discussion during an online meeting of Black Methodists for Church Renewal. Clockwise from upper left are: the Revs. Rudy Rasmus, Tori Butler and Erin Beasley. Screenshot via Zoom.
One pandemic kept The United Methodist Church’s black caucus separated for its first-ever virtual membership meeting, March 19-20. But another “pandemic” brought that dispersed membership together around one topic: the relentless scourge of racism that still vexes this centuries-old denomination.

Almost all components of the program addressed the challenge to dismantle racism that many U.S. denominational leaders, conferences and local churches have focused on for the past year. While that campaign, launched in mid-2020, is still new, the intractable problem it addresses is as old as Methodism’s American roots.

“Racism: The Unfinished Agenda — BMCR Calls Our Church to Fulfill Its 1968 Promise” was the meeting theme. Indeed, many spoke of that unfinished agenda as an unfulfilled promise in sometimes bold, candid statements.

Retired Bishop Forrest C. Stith keynoted the meeting with an impassioned racial history and sociology lecture that recounted American Methodism’s early struggle over slavery, which founder John Wesley opposed, and the resilient growth of Black churches despite the challenges of slavery and segregation. However, Stith began and ended focused on the current struggle over racial inequity and the journey toward justice and greater inclusiveness that has progressed, regressed and digressed in its course toward an uncertain future.

“To stay in this church, we have to renew the church,” Stith said, recalling the controversial naming of the new caucus in 1968. He was among leaders then who prepared for the gradual abolition of official racial segregation in a newly formed United Methodist Church.

Despite the church’s stated goal of inclusiveness, “achieving an anti-racist society is so difficult in this church,” he said. He recalled from childhood the practice of vigorously shaking a new bottle of milk to evenly distribute the cream resting at the top and thus, make the milk whole. But that home homogenization result can be short-lived, he said, if the bottle is left unattended and the cream soon rises back to the top.

“If you’re not careful, no matter how much you do, how many laws you pass or rules you make … the cream will still rise to the top, leaving the rest of the milk at the bottom.”

Expressing admiration for the social impact and diversity of the Black Lives Matter protest movement, Stith urged the caucus to keep shaking up the system by becoming a larger, stronger and more outspoken organization. He urged members to recruit and develop more and younger Black leaders, to collaborate more with allies and to reclaim its early activist role as a “gadfly” demanding lasting institutional progress across the denomination. 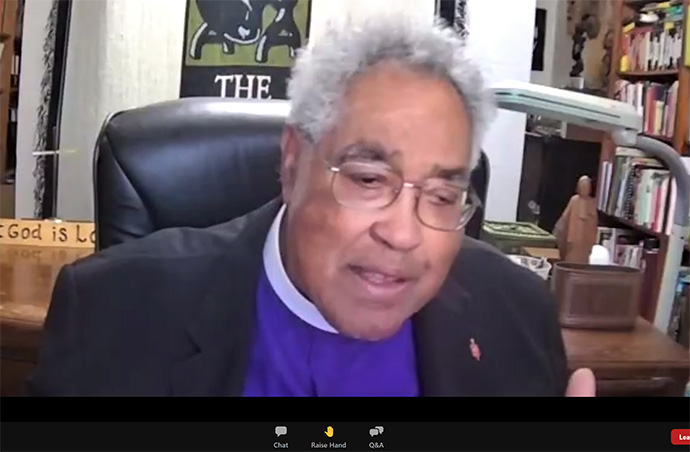 Retired Bishop Forrest C. Stith gives the keynote address during an online meeting of Black Methodists for Church Renewal, the Black caucus of The United Methodist Church. Screenshot via Zoom.
Mississippi Conference Bishop James Swanson ended the meeting with a closing sermon that delved more into the theological and political aspects of institutional racism as a sin and stain on the church’s character, requiring earnest repentance.

Preaching from Joel 2:12-14, he called for “a ripping and rending of our hearts” that leads to real change and transformation. “It’s not enough to just put it on paper.”

Echoing Stith’s theme of the illusion and temporary nature of superficial change, Swanson contended that the denomination’s decision to desegregate in 1968 might have been spurred emotionally by the assassination of the Rev. Martin Luther King Jr. a month earlier and a desire to signal a new era of justice in the church.

“That’s good, but what did we do to make it happen,” he asked, questioning the sufficiency of denominational diversity that resulted in programs, employment and legislative resolutions.

“We paint a real good picture of what we want the world to believe about us,” he said. “But have we done what Joel asked us to do: to rip our hearts in true repentance so the Lord can wash this sin and stain from us. … We’re not driven by a desire to please God but a desire to look good to the rest of the Christian community and to the world.”

Both bishops were also gently critical of African American leaders who value individual gains in success and power but have not pushed for progress that more broadly benefits Black churches.

“There needs to be a repentance of the heart on the part of us, too,” Swanson said. “Sometimes we’ve forgotten our first love and in many ways, we have traded in our own hunger for a reconciliation and true sharing of who we are in Christ Jesus.”

He also complained of the delusion some have that “things are getting better when many times we know they aren’t” and lamented that “materialism and racism often go together like hand in glove, as causes of oppression that stop us from realizing our dream of being the beloved community.”

Other voices were heard in two back-to-back panel discussions, both moderated by M. Garlinda Burton, interim top executive of the United Methodist Commission on Religion and Race. Burton informed members of several efforts being waged around the connection related to the U.S. church’s Dismantling Racism campaign, which was launched jointly by the Council of Bishops and several general agencies.

Burton shared from Religion and Race’s monitoring that many conferences were getting a slow start — offering anti-racism education in book studies and dialogues but not yet “dealing with real systemic concerns.” She said caucuses representing people of color need to work at “holding their conferences’ feet to the fire” to spur more progress.

Two caucus members shared a panel to report on what their conferences are doing. The Rev. Denise Smartt Sears, a New York Conference district superintendent, described efforts to “de-center whiteness” through anti-racism education and training, listening sessions, accountability measures and advocacy for reparations.

The Rev. Cody Collier, a retired member and clergy coach in the Missouri Conference, has helped his conference stimulate deeper awareness and greater accountability in combatting racism, while increasing equity in hiring, clergy appointment-making, financial decisions and other intentional practices.

The clergywomen spoke about their encounters and efforts to help white and Black United Methodists gain a better understanding of the history and current challenges of racism in the denomination. Both cited a need for more connection and support for young Black United Methodists that could bolster their recruitment into pastoral ministry, a goal that is widely acknowledged as a dire need for the church.

Rasmus observed that racial injustice and protests incited a “great Black awakening of 2020” and shared concerns from his recent doctoral study on “Millennial Culture and Institutional Religion.” He said the book is intended “to spark conversations that need to happen” about racism across generations in the church.

“The church has the unmitigated gall to be discussing laws around the issue of human sexuality but has not sufficiently addressed the long-standing problem of racism in the denomination,” he said, echoing a complaint of many Black leaders.

“Racism is definitely still an unfinished agenda that the church needs to deal with,” said the Rev. Antoine “Tony” Love, Black Methodists for Church Renewal chairman. “We need to grapple with our history and understand what is in the church’s own constitution and stated beliefs that it’s not living up to.”

Love said the caucus is “not calling for revolution or reparations necessarily,” rather that it is committed to the renewal of church values.

“We still believe the church can become a beloved community. That’s what we’re still hanging in here for,” he said.

Coleman is communications director for the Eastern Pennsylvania Conference.

Strengthening the Black Church for the 21st Century will offer tips on innovative ministries and better use of technology at its 2021 conference in Houston, which will be a hybrid live and virtual event.
General Conference

Organizers named the values that will guide their decision on whether the denomination’s legislative assembly goes forward as scheduled.
Social Concerns