A request to change the dates of the next General Conference should get a fair hearing, United Methodist bishops say.

Some 1,975 United Methodists have signed a petition that asks General Conference organizers to reconsider the proposed Aug. 31-Sept. 10, 2021, dates because they conflict with the start of the academic calendar. Four young adult delegates and a Young People’s Address speaker wrote and circulated the petition.

At its online meeting May 1, the Council of Bishops approved a motion that “strongly encourages” the Commission on the General Conference to consider the petition.

“We have heard the voices of our youth and young adults who are delegates and reserve delegates to General Conference 2021,” said retired Bishop Charlene P. Kammerer in introducing the motion.

Only the 66 active bishops have a vote at Council of Bishops meetings. The vote — by a show of hands over Zoom — was nearly unanimous, reported the Rev. Maidstone Mulenga, the bishops’ communications director. Only one bishop appeared to raise a hand in opposition, Mulenga said.

The petition noted that annual conferences elected an unprecedented number of young delegates to the coming General Conference, which is set to consider proposals to split the denomination along theological lines.

At recent General Conference sessions, young people have repeatedly called for finding ways for the church to work toward unity despite its longtime debate over LGBTQ inclusion.

For the coming assembly, annual conferences elected about 120 General Conference and reserve delegates who are age 35 or younger, said Chris Wilterdink, who directs Young People’s Ministries for Discipleship Ministries. That represents about 11% of the lawmaking body.

“This increase in youth and young adult voices to the body should be understood as a desire from annual conferences for young people to be involved in the decision making body of our denomination,” the petition said.

The new dates also could reduce the participation of parents, teachers and professors elected as delegates, the petition said.

General Conference organizers at the bishops’ meeting expressed sympathy for the young people’s request. However, they also cautioned that they face limited options in rescheduling such a large, international meeting when a global pandemic has scrambled calendars and disrupted lives worldwide.

The next General Conference, set to draw 862 delegates from four continents, was initially scheduled to start this week in Minneapolis.

The commission had to postpone the 2020 General Conference after the Minneapolis Convention Center canceled events into May to reduce the spread of the coronavirus. The shutdown would have affected the first five days of the May 5-15 day gathering.

The commission has not yet officially announced new General Conference dates. However, the dates under consideration became public when the Council of Bishops listed them in a mass email to its members and other church leaders.

Bishops and commission members have received a lot of correspondence about the young people’s concerns, Bishop Thomas Bickerton told his episcopal colleagues early in their virtual meeting. Bickerton serves as the bishops’ representative on the commission as well as the leader of the New York Conference, which has been particularly hard hit by COVID-19.

“I greatly appreciate this motion that has been lifted up by Bishop Kammerer,” Bickerton said May 1.

He added that the commission has scheduled a May 16 online meeting to consider the petition.

Sara Hotchkiss, the General Conference business manager, has been the commission’s point person in negotiating a new contract for the postponed legislative assembly.

The General Conference commission directed her to keep the event in Minneapolis, where United Methodists in the Minnesota and Dakotas conferences have been planning to host the gathering for more than five years.

“Those of you who have hosted General Conference know this is a costly endeavor, and often is no less than six figures in the cost of hosting it,” Hotchkiss told the bishops. 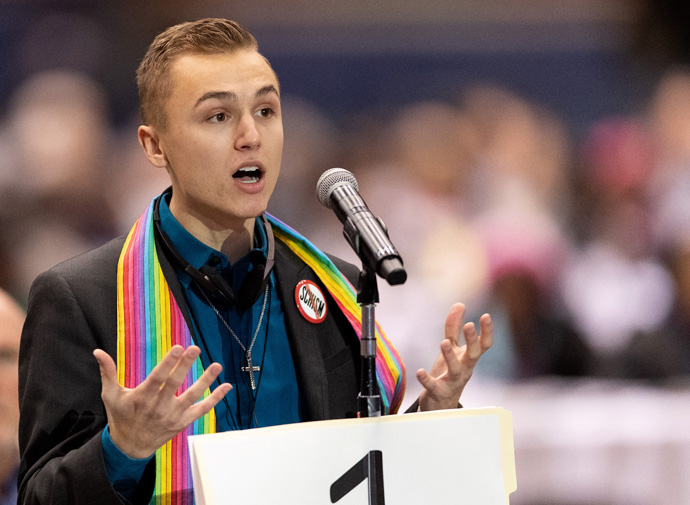 Negotiations have been slow, she said, because the pandemic has shut down so much of the hospitality industry and left many of its employees out of work.

“The ability for a convention center and hotels to accommodate a meeting like ours is somewhat miraculous,” she added.

Nevertheless, she said, the voices of young people are important to the commission, which has youth and young adult representatives among its membership. The commission has invited the young adults who drafted the petition to be in dialogue at its May 16 meeting.

Ann Jacob, one of the writers of the petition, told UM News she is grateful for the Council of Bishops motion, the commission and those who signed the petition.

She said the signers come from 80 annual conferences around the world, including more than 50% of the young delegates elected to General Conference 2020.

“At this critical moment in our history, the commission has the opportunity to provide for the most diverse and fully representative General Conference The United Methodist Church has ever seen,” said Jacob, a General Conference delegate from the Eastern Pennsylvania Conference.

“Today we experienced the ability of the UMC to be the church — to prophetically raise up the voices of the marginalized and to act to alleviate their pain,” he said. “I am thankful to the entire Council of Bishops for supporting our petition and showing us that the church truly cares about young people.”

Jessica Vittorio, a petition author and delegate with the North Texas Conference, said she is inspired.

“I am encouraged as to the steppingstones this petition has created for young people to have a more active role in institutional decision-making and consideration moving into the future,” she said.