United Methodist Bishop Daniel Lunge Onashuyaka is playing a peacekeeping role in the Sankuru Province, home to the Central Congo Conference with 16 districts and more than 500 United Methodist churches.

The territory of Lodja has been facing violence since the election of the provincial governor in July. With the growing insecurity, Lunge organized a reception for Sankuru authorities at the bishop’s office Sept. 11 to look for ways to work together to bring peace to the region.

The new governor, parliament president and other government officials attended the meeting.

“We will support you in all good activities that you will take to bring peace in the Central Congo Annual Conference area and for the development of the Sankuru Province,” Lunge said. “We will organize as much activities and meetings to ask Sankuru people to work for peace.” 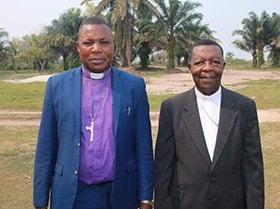 The bishop said he hosted the meeting because the absence of peace has made it difficult for leaders to organize church activities in many areas of the conference. He said continued unrest could compromise the organization of next year’s annual conference.

At this year’s annual gathering in August, Lunge and his delegation had to be escorted by United Nations soldiers because they feared traveling the road alone.

The violence began after Joseph Stephane Mukumadi was elected governor of the province. Mukumadi, accused of holding French nationality, was originally disqualified from the election by the Sankuru Court of Appeals. However, after a long process, the same court overturned its own decision and he was allowed to re-enter the election.

Mukumadi defeated candidate Lambert Mende Omalanga. The results were met with violence, including a series of killings, arson and robbery.

Among the victims was a United Methodist pastor, the Rev. Shako Sona, who lost everything when his house was burned down. He was in Tshumbe at annual conference, but his wife was home at the time and escaped unharmed.

“I think the lack of peace in our area due to post-election troubles is the base of the burning of my house,” Sona said.

At the bishop’s meeting, Mukumadi said he was open to any peacebuilding efforts or events organized by the church. He said he was familiar with the church, having attended a United Methodist primary school in Kananga.

“I really appreciate the effort of not only The United Methodist Church, but also the Catholic Church and other revival churches of the province for all the effort they are putting together to have peace in Sankuru,” he said.

Before the election, Lunge joined Bishop Nicolas Djomo Lola of the Roman Catholic Diocese of Tshumbe and other religious leaders for a prayer gathering for a peaceful election process in Lodja.

The leaders were asked to do all in their power to help promote peace in the province.

Government authorities have invited Lunge to speak more about peacemaking during a meeting of Sankuru officials next month.

Okende Bonge, general secretary of the Ministry of Home Affairs, also attended the bishop’s reception. He said he is grateful for the church’s involvement.

“I am really happy to see how the church, through its leader, is involved and is a big actor for peacemaking in Sankuru. I hope for peace in that part of the country.”