In a sermon under a tent, on a rainy Sunday morning, Bishop Minerva Carcaño challenged a global gathering to look at the promise God first made 90 years ago when Bishop Joseph Crane Hartzell started telling people about his vision of a university for all of Africa.

Preaching on 1 Samuel 7:12, Carcaño drew parallels between the Israelites’ fear of the Philistines that made them doubt God’s promise to be their helper and salvation and those in The United Methodist Church who doubted Africa University could be a reality.

“How many times, how many people, have doubted that God could establish Africa University?” she asked.

See photos of the celebration.

Carcaño, bishop of the California-Nevada Conference and a member of the Africa University board of directors, closed a three-day celebration for the 25th anniversary of the institution.

When the Israelites turned their hearts to God, God heard their cries, Carcaño said.

Hartzell had the vision in 1898 when he stood on Chiremba Mountain and envisioned hundreds of African young people with books in their hands, running to school.

In its first 25 years, Africa University has produced more than 7,000 graduates who are leaders in the church, government and business across the continent.

“It took us a long time to trust in Africa University,” Carcaño said.

The sins of being complicit in wrongs done in Africa, including a tendency to want to create Africa “in our own image,” kept United Methodists from accepting the promise of God in creating Africa University, she said. 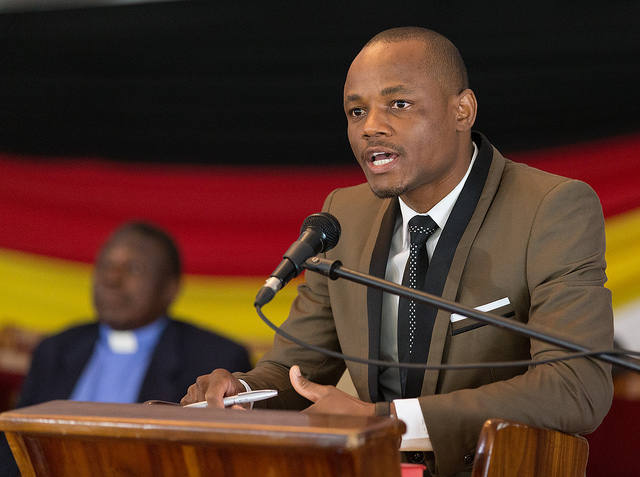 Christopher Namilonga brings a thank you from students during the 25th anniversary celebration for Africa University in Mutare, Zimbabwe. Photo by Mike DuBose, UMNS.

She added that she dreamed of Africa University satellite campuses across the world working to alleviate suffering.

Carcaño remembered the Rev. Jimmy Carr who died on March 17. A long-time supporter of the university, he had planned to come for the 25th anniversary celebration. Carr led a campaign in the United Methodist Mississippi Conference in 1994 to place the large Cross and Flame that sits high above the school.

Carcaño told the global gathering about a phone call Carr made to Jim Salley, Africa University’s vice chancellor of advancement and development, recently telling him to paint the Cross and Flame. She quoted him as saying, “It has to look good for the 25th anniversary.”

“Carr and many, many others, we call them saints,” she said.

Christopher Namilonga, president of the student representative council, thanked all those who had come to join in the celebration.

“We students are humbled by seeing people come from all over the world,” he said. “It means someone cares for us beyond that mountain, beyond the continent.”