• The first in-person annual gathering of the Association of Korean Churches in The United Methodist Church was held April 25-28.

• Several panelists questioned whether the church’s membership decline could be attributed to its long-standing conflict over homosexuality.

• It was reported that the Korean churches had raised more than $110,000 to help the victims and refugees of the war in Ukraine.

The meeting was held April 25-28 at the Renaissance Hotel and Central Korean United Methodist Church in Dallas.

At the opening worship service, the Rev. Chul Goo Lee, the association’s president and pastor of Korean United Methodist Church of South Florida, preached and exhorted the participants to honor and listen to God's voice.

“Our judgment is not perfect. Are you ministering with listening ears to the voice of God saying, ‘My presence will go with you?’” he asked. “Regardless of whether you are progressive or conservative, we must become leaders of faith who honor and listen to the words of God. If we listen to it, go that way; and if God gives you a clear message, you just hold on to it and follow.”

The Rev. Keihwan Kevin Ryoo (holding microphone) answers questions during a panel discussion about the state of The United Methodist Church and the future of the Korean church at the Association of Korean Churches in The United Methodist Church meeting in Dallas. Participating in the discussion, from left, are: the Rev. Ilyoung Will Kim, Rev. Yontaek Bae, lay elder Jinho Woo, Rev. Hanseung Koh, Ryoo, lay elder Jungkwan Choi, Rev. Sun Hyung Jo, and lay elder Kwanho Choi. Photo by the Rev. Thomas Kim, UM News.

On the morning of the second day, retired Bishop Young-Jin Cho, interim pastor of Korean Church of Atlanta, led a discussion titled, “The Current State of The UMC and the Future of the Korean Church.”

He also attributed the decline of The United Methodist Church to a lack of spiritual renewal and revival.

“The UMC in America has been declining. The solution is a spiritual renewal — not a new, smarter program or initiative, which we've been trying to do for the last 40 years,” he said. “Because renewal and revitalization comes when pastoral leadership is transformed, we have to build churches on a spiritual foundation, not just rely on skills. I hope that the (Global Methodist Church) and UMC will compete with each other for this.”

One of the panelists, the Rev. Eugene Euyjoon Han, pastor of Christ United Methodist Church in Honolulu, Hawaii, asked whether there is no revival in Korean churches because of the issue of homosexuality. 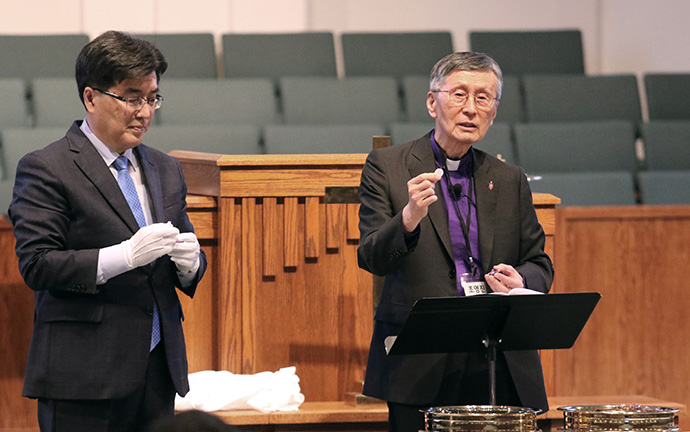 The Rev. Chul Goo Lee (left), president of the Association of Korean Churches in The United Methodist Church, and retired Bishop Youngjin Cho, interim pastor of the Korean Church of Atlanta, prepare to serve Holy Communion during the first day of the association’s meeting. Photo by the Rev. Thomas Kim, UM News.

On the third day, the conference continued the same discussion and the Rev. Keihwan Kevin Ryoo, mission executive secretary of the Association of Korean American United Methodists and a member of the Transitional Leadership Council of the Global Methodist Church, shared his opinion.

Ryoo expressed concern that conservative bishops and pastors would be punished if the Book of Discipline is revised, but the Council of Bishops has stated that The United Methodist Church will remain a denomination for all.

In its vision of the future of the denomination, titled, “A Narrative for the Continuing United Methodist Church,” the council said, “We cannot be a traditional church or a progressive church or a centrist church. We cannot be a gay or straight church. … Instead, we must be one people, rooted in scripture, centered in Christ, serving in love and united in the essentials.”

Ryoo also mentioned that because Paragraph 2553 of the Book of Discipline will expire on Dec. 31, 2023, revising the paragraph would be burdensome. He said time is short, and expenses would be too high. He advised Korean churches to use Paragraph 2548.2 instead. However, that paragraph only addresses deeding church property to another denomination. The Council of Bishops has stated that conferences should use the Discipline’s Paragraph 2553 as the primary paragraph for disaffiliation and separation.

Ryoo expressed optimism that there will be comity agreements between the two denominations. Bishop Cynthia Fierro Harvey has said no such comity agreement currently exists with the Global Methodist Church.

“The number of members has decreased; where have they gone?” he asked. “We need to consider whether this is a natural decrease or if there is another cause of the decrease. Is homosexuality a problem? So, how does homosexuality make it difficult for us? Where did the leaving members go?” 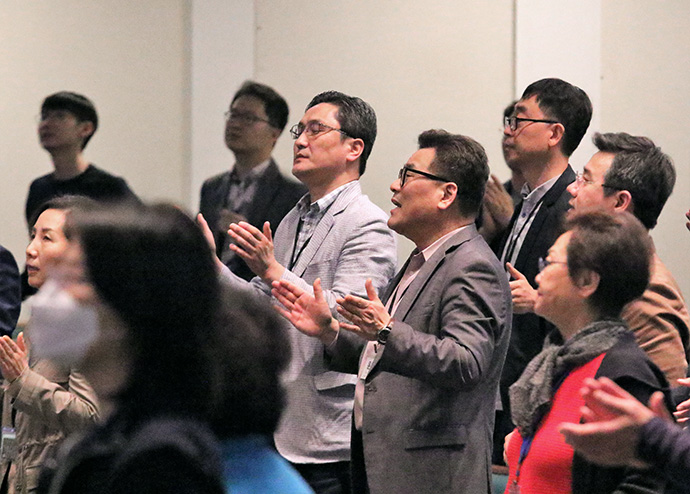 Jinho Woo, who serves as a young adult minister at First Korean United Methodist Church in Wheeling, Illinois, urged the association to focus on how to prepare for the future.

“About 50 young adults I am serving do not understand and feel why the denomination is about to split due to the controversy over homosexuality,” Woo said.

The Rev. Han Seung Koh of Korean Community Church of New Jersey in Englewood, New Jersey, expressed disappointment and concerns regarding the possibility of adapting the Protocol of Reconciliation and Grace through Separation as the General Conference has been rescheduled to 2024.

“Seeing the declining churches and denominations, I thought of a nursing home where I did not want to stay for long,” Koh said. “I had hope for (the Global Methodist Church). When we said we were joining GMC together, there was an expectation that we would create Korean Conference in it, but now the process has become more difficult and the cost of disaffiliation will be increased. I am disappointed.”

“Conservatives and progressives are just a frame made by people. Now, the salvation of souls does not happen in the church, the kingdom of God is not proclaimed, and the ministry of healing the sick does not occur,” he preached. “However, Satan created a framework out of ordaining LGBTQ+ pastors that has distracted pastors who do not serve their churches diligently."

Kim appealed for the church to obey the Lord's command to go to Samaria.

“Samaria is a people you don’t want to meet, a place you don’t want to go to serve …. So, even if you join GMC, let's create a miracle that the Korean church will love homosexuals with the love of Jesus. We have not respected clergywomen. Let’s make it a church where women pastors are respected at any cost,” he said. 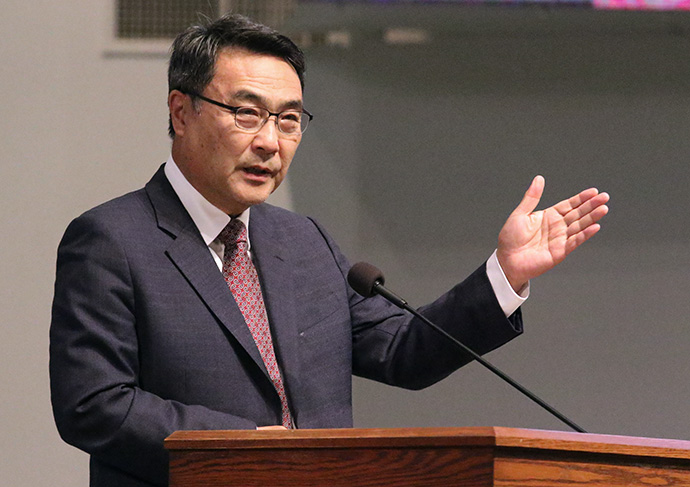 At a business meeting on the last day, it was reported that the Korean churches had raised more than $110,000 to help victims and refugees of the war in Ukraine. Half of the money will be sent to the United Methodist Committee on Relief and the rest will be sent to churches and missions in Ukraine directly.

“We confess our faith in the biblical truth and keep our traditional faith. … We believe that the church should love and have compassion on homosexual persons, and that we have the responsibility to share the Gospel of Jesus Christ … According to the Scriptures, which is revelation of God, we shall not recognize same-sex marriage or accept ordination of homosexual persons,” it said. “We shall not be afraid to prepare the way to a denomination where we would keep the biblical truth.”

The association acknowledged receipt of the “Confessions and Resolutions of Association of Korean Churches in UMC” statement and decided to revise the wording with the spirit of the statement maintained, and will issue the final draft in the near future.

In the draft statement, the association asked bishops: "As spiritual leaders of the church, keep the Book of Discipline and exercise responsible leadership in the conferences’ and churches’ disaffiliation process."

The draft statement also outlines the Association of Korean Churches in The United Methodist Church’s commitments, which include the following:

“We will do our best to pay apportionment, which is the basis of the Methodist connectionalism, and help the weak church by collecting 1% of the church budget. We will pray together for UMC and Global Methodist Church … We will respect the decision of each church and pastor, and bless their decision.”