Pointing to a pretty brick bungalow just blocks from Little Rock's historic Central High School, the smiling, affable man says proudly, "That's mine. Twenty years ago, I would never have believed my son and I would be living here. I was homeless, on the streets, on drugs.

"I bought that home this year. God is good."

Monte Payne has nothing but positive things to say about Theressa Hoover United Methodist Church, named for the Philander Smith College graduate, now 87, who headed the Women's Division of the United Methodist Board of Global Ministries for 22 years.

One of the congregation's greatest strengths is its Hoover Treatment Center, which for 20 years, has provided affordable, accessible and quality substance-abuse treatment. The center is an integral part of Better Community Developers Inc., formed in 1981 as the focal point for the church's outreach ministries.

Payne credits the center with giving him "a diagram for living."

Born in Los Angeles 48 years ago, Payne served in both the Air Force and the Army National Guard. His abuse of crack cocaine and alcohol started there. Soon he was living on the streets. 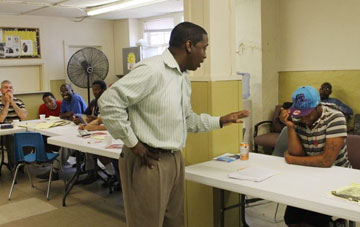 Payne works as a counselor at Will's House.

Moving to Russellville, Ark., at age 22, he continued battling his demons. He finally wound up at the Hoover Treatment Center in 2004. The only licensed, faith-based provider of its kind in Arkansas, the center provides a structured, 24-hour, intensive residential and outpatient program that addresses the chemical dependency needs of men and women.

"I was really pretty much beat down," Payne admits. "I was ready to listen.

"I was ignorant to the fact that I was dying spiritually."

Payne realized he had to change.

"I finally realized that there is a God, and then his Holy Spirit started to breathe in me. I started to get to the point where I would say things, and I know it was not of me. I know that it come from somewhere else. Then I realized that God is the ultimate power. When I need him or I need some help, I need to go to God."

Today, Payne works full time as a counselor at Will's House, also related to Hoover. Will's House provides supportive housing for men and women in recovery, some of whom have spent time in prison. Payne supplements his income by delivering newspapers at night.

He says there is no average age of people in treatment. One man now living at Will's House relapsed at age 62. "That could have been me" eventually, Payne said.

Better Community Development Inc. is just one of many programs that benefit from the annual Human Relations Day offering, which United Methodists will share on Jan. 20, 2013.

One of six churchwide special Sundays with offerings, Human Relations Day calls United Methodists to recognize the right of all God's children in realizing their potential as human beings in relationship with each other. Celebrated on the Sunday before the birthday observance of the Rev. Martin Luther King Jr., this special offering supports community ministries that teach and advocate for justice, especially among people struggling to survive in the margins of society.

He also leads recovery group meetings at the church. It's a natural fit. "I've been there. I've been homeless. I've been crack-addicted. I've been an absent parent. I've had no hope," he tells the group.

The counseling helps participants look toward the future. "A lot of the counseling," Payne explained, "like helping with jobs, helping with finances, helping with parenting, would seem simplistic to the average American - but they didn't lose 10 or 15 years of their life in drug addiction &ellipsis and in the endless consequences of addiction.

"I know that someone had to love me 'til I could love myself. And that's what I try to do with the people that come through our doors."

The neighborhood around the church breeds the problems and negative assumptions that Payne strives to repair. But Better Community Development ministries are making a visible difference. Its credit-repair and mortgage-attainment program paved the way to home ownership for Payne.

Payne has custody of his son, Errin, who plays football at Central High. Nurturing the father-son relationship is high on this dad's list. He wants things to be different for Errin, who will graduate next spring.

Of the struggles before he found Hoover, Payne said, "I was blind to the truth. One thing I love about the truth is no one can take it away from me. I know it. I learned it. I lived it. I lived in the dark, and now I live in the light.