The United Methodist North Central Jurisdiction Committee on Appeals has up to 20 days to rule on charges stemming from the Rev. David Meredith’s 2016 marriage to another man.

On March 9, the West Ohio Conference presented arguments that the conference Committee on Investigation made “egregious” errors when it dropped some of the charges against Meredith. 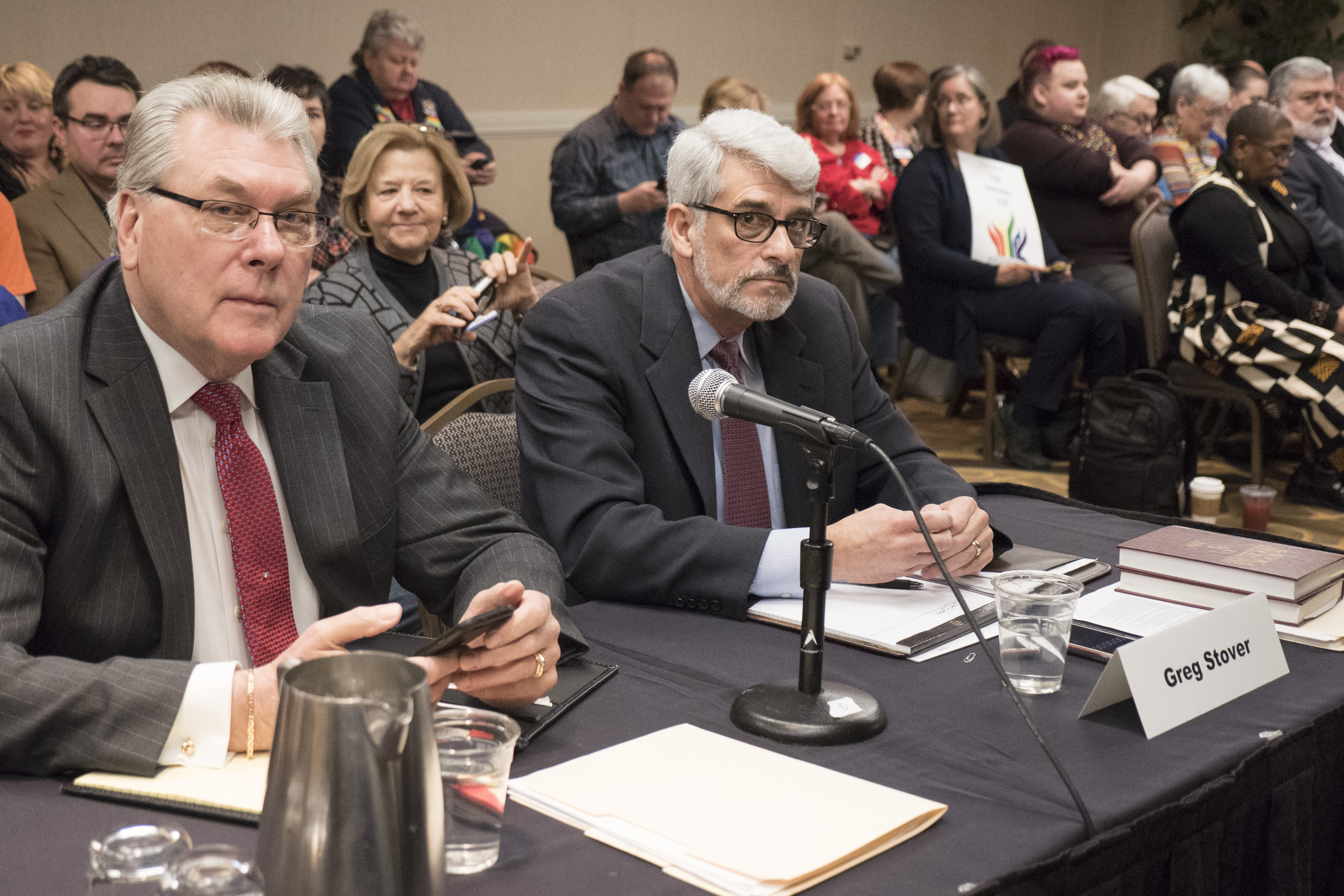 Rodger Walk, left, and the Rev. Greg Stover, appellant for the West Ohio Conference, argued that the West Ohio Committee on Investigation ignored a 2017 Judicial Council ruling when it dismissed two of three charges against the Rev. David Meredith.

Meredith, pastor of Clifton United Methodist Church in Cincinnati, Ohio, faced complaints of violating church law after he married Jim Schlachter, his partner of almost 30 years. Two days after his 2016 marriage, complaints were filed with the West Ohio Conference.

The Rev. Gregory Stover, appellant for the West Ohio Conference, said the committee on investigation ignored a 2017 Judicial Council ruling when it dismissed two of the charges.

“Church law is clear and unrefuted. Egregious errors were made and we ask this court to recognize them,” he said in his summation. The jurisdictional committee will rule on whether to reinstate all the charges.

The West Ohio Committee on Investigation, in an Oct. 15, 2017 meeting, considered three charges against Meredith:

The committee dismissed the first two charges. The third charge still carries the possibility of a church trial and the removal of Meredith’s clergy credentials.

United Methodist Judicial Council Decision 1341 ruled that “a same-sex marriage license issued by competent civil authorities with the clergyperson’s status in a same-sex relationship is a public declaration that the person is a self-avowed practicing homosexual.”

“He (Meredith) broke covenant with the church,” Stover said. “As a covenant people faithful to our vows, we must hold people accountable to church law.”

The Rev. Randy Stearns, speaking for the West Ohio Committee on Investigation, said the decision was not a political statement and each person deliberated and affirmed their decision.

“All seven people voted their conscience after hearing all the evidence,” he said. “There was no celebration in that room or in the hallway after. It was a privilege to work with them … we were faithful to the process.”

Stover affirmed the integrity of the committee and said he appreciated their tone.

“But integrity and fairness does not guarantee there will not be errors. At issue is the result of the votes,” he said. 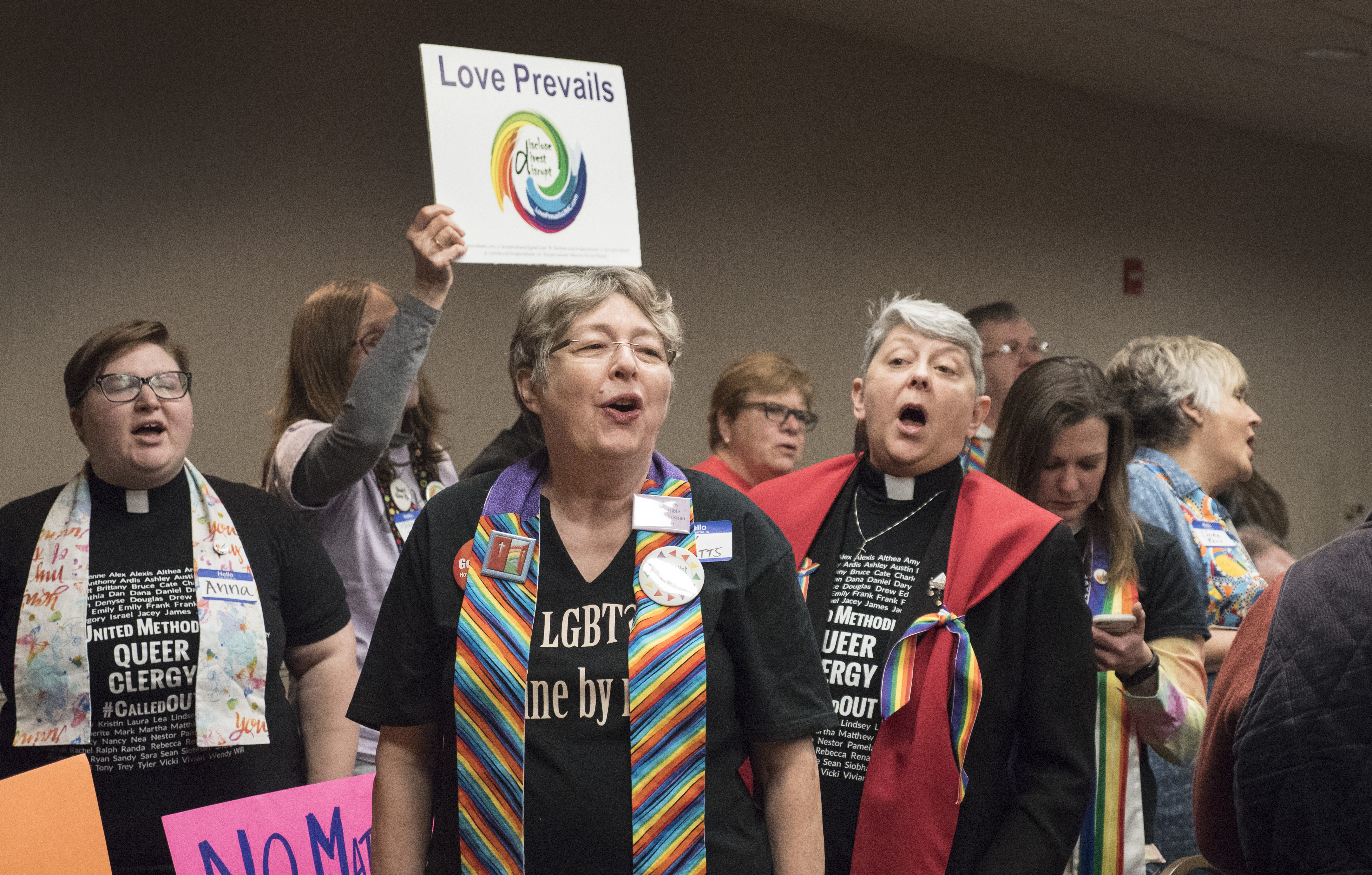 Supporters for the Rev. David Meredith sing at the end of the hearing concerning which charges the Ohio elder faces for his 2016 marriage to another man. Photo by Kathy L. Gilbert

More than 200 people representing LGBTQ advocacy organizations, members of Clifton United Methodist Church and family and friends of Meredith and Schlachter came to the Indianapolis Hilton to attend the hearing, but only 50 people were allowed to sit in the hearing room. No recording or photos were allowed during the hearing.

The Rev. Pamela Lightsey, on staff at Meadville Lombard Theological School, Chicago, was there to represent Meredith. However, since the hearing was only about the results of the West Ohio Committee on Investigation, the Book of Discipline states no witnesses could be called.

After the hearing, Lightsey spoke to the gathering of Meredith supporters.

“Judicial Council ruling 1341 effectively places the church into a new reality. LGBTQ persons who marry their loved one must declare they are not sexually active as their only defense (against charges),” she said. “This is not something they do for any other clergy in the church. They single out LGBTQ persons. It is an egregious action on the part of a church that declares LBGTQ are persons of sacred worth.”

Meredith said he saw two pictures of the church emerge in the hearing.

The West Ohio Committee on Investigation was “deeply spiritual” and “committed to a careful interpretation” of the Book of Discipline, he said, while the West Ohio Conference was “very legalistic.”

“I know the one I want to be part of. I hope the committee on appeals saw that and honors it as what The United Methodist Church could be,” he said.

As the number of pastors serving congregations who don’t look like them grows, conference aims to equip both clergy and congregants to overcome cultural obstacles.