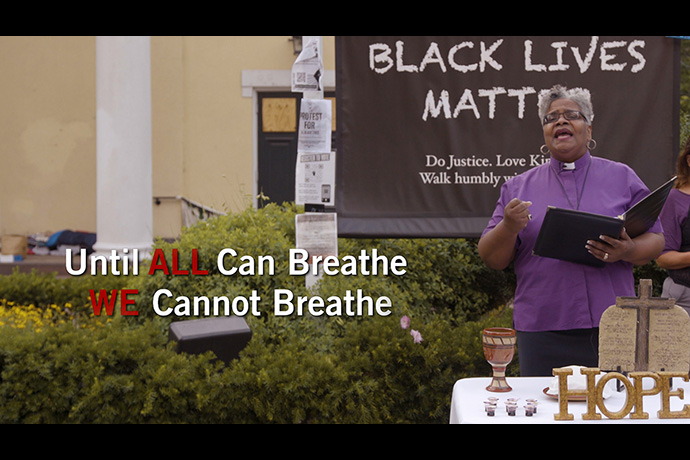 United Methodist Bishop LaTrelle Easterling helps conduct a denomination-wide online service of lament for racism while standing in front of St. John’s Episcopal Church in Washington on June 24, 2020. The anti-racism work of the church is just getting started after the first year of the Dismantling Racism campaign, say bishops and others. File screenshot of video by United Methodist Communications.

• The first year of the Dismantling Racism campaign made progress but was hampered by the shutdowns around the coronavirus pandemic.

• The anti-racism work will continue for a long time to come.

It was a nightmare scenario that could have been deadly.

Two toddlers locked in a car on a hot day. The keys mistakenly left inside the vehicle by their mom.

“It was a very hot day and the air conditioning was not on,” said Morgan Stafford, executive director of the Memphis Wesley Foundation. Back then, he was working with children at Antioch United Methodist Church in Nashville as part of Project Transformation Tennessee.

Stafford was going to call the police for assistance, but the mother begged him not to do it.

“My heart sank,” Stafford said. “I knew that she was in a vulnerable spot because of documentation. It was a very hard experience to see a mother who was in a spot where she had to risk the safety of her own children because a phone call could not be made.”

Tragedy was avoided because one of the trapped children was able to follow instructions to unlock the car from within.

The incident was in his mind when Stafford documented on his Facebook page in June 2020 his effort to do an intentional action each day for a month to address racism. The activities included participating in a protest, watching an anti-racism documentary and supporting a Black-owned business.

The idea was adapted in September 2020 by the national United Methodist Dismantling Racism campaign, which also began in June that year after the death of George Floyd and protests across the U.S.

The denomination’s campaign is now more than a year old, and church leaders say the discussions are still just beginning.

“There are many committed leaders at all levels of the church who are actively working to dismantle racism, tribalism, xenophobia and white supremacy,” said Bishop LaTrelle Easterling of the Baltimore-Washington Conference, who also chairs the Council of Bishops’ Anti-Racism Task Force.

“While we have come a long way, there is still a long way to go.”

Louisiana Bishop Cynthia Fierro Harvey, who is president of the Council of Bishops, concurs on both counts.

“I don’t think this is the kind of work that has a beginning and an end,” Harvey said. “I think it's on the continuum. This will not come to an end. This will continue.”

As was everything, the Dismantling Racism initiative was impacted by the coronavirus pandemic.

“The lack of in-person meetings and the postponement of General Conference has required creative approaches to the work of anti-racism,” said Erin Hawkins, executive director of Connectional Ministries for the California-Pacific Conference, the former top executive of the United Methodist Commission on Religion and Race and a consultant for the Dismantling Racism campaign.

“We have relied on Zoom meetings and the creation of digital resources to support the initiative’s efforts with great success, but these methods have their limits. … The deep work of changing hearts and minds and dismantling systems that sustain oppression requires us to show up physically in spaces where transformation is needed.”

Despite that hindrance, Dismantling Racism has enjoyed successes, Easterling said. Those include:

• A service of lament for the sin of racism;

• a series of Lenten devotionals featuring bishops from across the global connection; and

• providing support and resourcing for diversity, inclusion and anti-racism efforts within annual conferences.

The response hasn’t been entirely positive. One oft-heard complaint has been that the campaign is “too political.”

“Jesus' crucifixion was pretty political, but we don't necessarily like to go there,” Harvey said. “I think (Dismantling Racism) is deeply theological. I think it's deeply Gospel driven.

“When we think about Jesus' words to us of loving God and loving our neighbor, I don't know how much more biblical and theological you can go as far as that is concerned.” 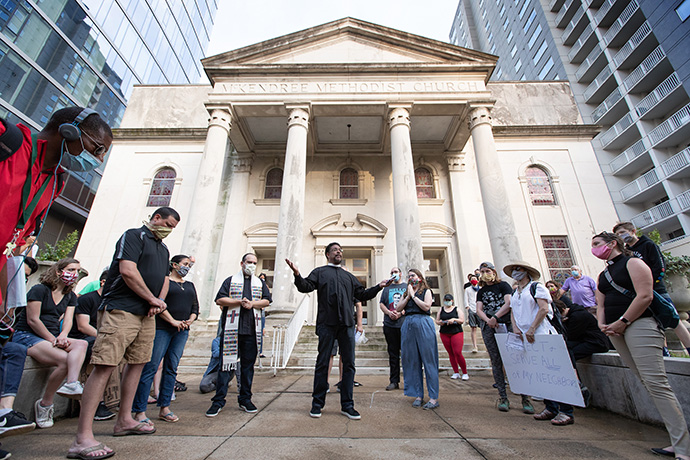 Leaders in some churches avoid racial discussions because it can be divisive, Harvey said.

“When we start talking about white fragility, it's an uncomfortable conversation,” she said. “When you point out white privilege, it’s a hard pill to swallow. … The resistance, I think, is in not wanting to cause more division than already exists in the church.”

Although the Dismantling Racism campaign is mostly happening in the U.S., racism is also a problem abroad. Bishop Mande Muyombo of the North Katanga Episcopal Area said discussions are also taking place in Africa, the Philippines and Europe.

“Ethnic discrimination and violence as a result of tribalism is a very serious issue in many parts of Africa,” Muyombo said. “The bishops here are working to address this and to bring an end to the bloodshed, corruption and division that it causes.”

In the Philippines, preventing discrimination against indigenous people has been a priority for bishops. In Europe, the focus has been on working with migrant and refugee populations as well as speaking out against nationalist efforts that promote white supremacist values.

There are several new anti-racism efforts on tap, Easterling said, including:

• An ecumenical briefing about how The United Methodist Church is partnering with other denominations and faith groups on anti-racism;

• a process of truth and reconciliation to support healing the legacies of racism in local communities;

• an anti-racism social justice agenda for the church; and

• educational materials and digital resources for continued discussion and action.

The Council of Bishops is committed to the long haul when it comes to anti-racism work, Easterling said.

“The central message of this campaign is that justice, freedom and belonging are inalienable rights to personhood and birthrights as children of God,” she said. “Wherever we see systemic infringement upon freedom and liberty, we must work to bring real change.”

Bishops are trying to set the record straight on misinformation being spread about The United Methodist Church’s future. They also are working toward building a church where traditionalists, centrists and progressives will all feel they belong.
Local Church

Inspired by a United Methodist church in Pennsylvania, Hampden Highlands United Methodist Church in Hampden, Me., set out to do mission projects to assist its neighbors, completing 24 projects, nine more than originally planned. The New England Conference has the story.