More than a week after the presidential elections in Côte d’Ivoire, The United Methodist Church works to ease tensions as uncertainty weighs on Ivorians.

In a similar political scenario to the one that led to a civil war 10 years ago, the country is divided between supporters of former President Alassane Ouattara who was re-elected with 94% of the vote, and those for his opposition, who boycotted the electoral process and formed a parallel administration. They argue Ouattara’s win violates constitutional term limits, but the Constitutional Council validated the election results on Nov. 9.

The Côte d’Ivoire United Methodist Church is calling for prayer and peaceful resolutions.

Jubilé-Cocody United Methodist Church in Abidjan is behind the residence of former president Henri Konan Bédié, who was an opposition candidate in the election. The bishop and other church leaders who live on the church grounds left for safety reasons.

Protests around Bédié’s home led to law enforcement using tear gas on the crowd. Armored vehicles have been stationed at the entrance of the main roads leading to the residence and other districts. No taxi or public transport are allowed in the neighborhood as a precautionary measure.

The Voice of Hope radio station also is at Jubilé-Cocody. The staff left the building, but, as was the case during the 2010-2011 crisis, the station continues to broadcast 24 hours a day.

“All is well. The experience of 2010-2011 and the habits adopted during the COVID-19 pandemic allowed us to be ready during this electoral crisis,” said Lydie Acquah, director of The Voice of Hope. “As soon as there is a lull in the neighborhood, a team goes to the station to check the equipment and update the content.”

However, Acquah said, overnight programs that required staff presence have been suspended. Vernacular language programs also were halted because of barricades in different cities and the issues with public transit.

The current Voice of Hope programming has been specially designed to emphasize prayer and calls for peace and cohesion, Acquah said.

Several United Methodist churches in the region also have been affected by the unrest.

Dabou United Methodist Hospital, 50 kilometers southwest of Abidjan, was caught in the middle of an intercommunity conflict in the city Oct. 19-22 that began after opposition parties declared the active boycott. 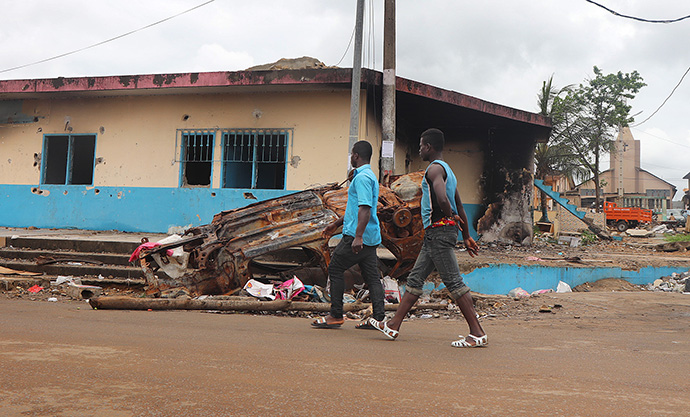 A burned vehicle lies in front of the bullet-riddled police station near Emmanuel United Methodist Church (right, background) in Bonoua, 50 kilometers southeast of Abidjan, Côte d’Ivoire. On Aug. 13, 2020, demonstrators set fire to the building to protest President Alassane Ouattara’s decision to run for a third term against the constitution. An 18-year-old boy was killed by law enforcement according to local authorities. Photo by Isaac Broune, UM News.
The violent conflict, between native Adjoukrou and non-native Malinké, an ethnic group from northern Côte d’Ivoire, also affected the United Methodist Bambara community. The majority of the community’s 180 members are Malinké.

“A chorister’s husband was wounded by machete blows, and their home was burned down by strangers,” said Robert Tera, the community’s lay preacher.

Tera said one of his nephews died in the conflict. The church building was spared, but some members took refuge in the village of Debrimou.

“Today, everything is quiet. But people don’t go to the market or to work,” Tera said.

The clashes that took place in the neighborhoods around Dabou United Methodist Hospital brought the issue of the health center’s safety to the forefront.

The hospital received seven people with serious buckshot and stab wounds. Two of them had to be evacuated to better-equipped facilities in Abidjan.

“We must secure the hospital because we have been living in a situation of total insecurity for a long time,” he said, also noting recent burglaries.

The United Methodist Board of Global Ministries awarded a $100,000 grant to be used to construct part of a fence around the hospital’s 18 hectares of land. The agency had approved the money to cover the cost of renovating the hospital, including new paint and laundry facilities, but after the unrest, Ahui asked that it be reallocated for the fence and Global Ministries approved.

Ahui said the insecurity is keeping patients away from the hospital.

“With COVID-19, we were experiencing a 35% drop in activity. The inter-community tension has accentuated this drop to 60%. People are afraid to go out,” Ahui said.

Although calm seems to have returned to Dabou and other towns in Côte d'Ivoire that have experienced unrest, including Yamoussoukro, Abengourou, Daoukro and Bonoua, people are still exercising caution.

The Rev. Joël Thierry Vry, who is in charge of the Grand-Bassam Circuit, sent a note to his churches to ask them to postpone all evening activities and emphasize family prayer time.

The Côte d’Ivoire United Methodist Church and United Methodist Communications, along with The All Africa Conference of Churches, also have launched a large-scale communication campaign, the “Great Caravan of Peace,” to call for words and attitudes of peace during these politically tense times.

Called “Côte d’Ivoire, receive my peace,” the 10-vehicle caravan crisscrossed several towns to bring messages of love, fraternity and conviviality. The theme was reiterated on billboards and banners, in radio and newspaper ads and via UM Connect text messaging.

The campaign ended in Abidjan on the eve of the Oct. 31 presidential election, but it is continuing in other parts of the country.

“Other cities are taking over for the rest of the year,” said Dominique Tayoro, coordinator of the peace caravan.

“Politics must not be a blank check to disturb peace,” said Robert Beugré Mambé, minister and governor of the Autonomous District of Abidjan, who hosted the caravan in his village.

He is a United Methodist preacher and former president of the electoral commission.

“The church’s desire is that we live in times of peace. When there is war, no one benefits from the life that God gives. Therefore, we need to make decisions for peace so that the specter of war can be removed from this country,” he said.

Broune directs French news for UM News and is based in Abidjan, Côte d'Ivoire. Hervé Koutouan, a freelance journalist, contributed to the story.