United Methodist bishops in Africa have pledged to transform agriculture from the current subsistence farming to commercial ventures that can financially support the church.

Bishops attending the first United Methodist Board of Global Ministries/United Methodist Committee on Relief agricultural summit last month said agriculture is a major issue affecting health and economic independence and can be an effective evangelism tool.

Bishop John K. Yambasu, Africa College of Bishops president, said it is time for the church to invest seriously in agriculture.

“Currently, agriculture is a kind of vocation. The only notable projects are in Cote d’Ivoire, Liberia, Democratic Republic of Congo and Zimbabwe,” he said.

“The type of farming we need is geared toward economic independence — something beyond the kind of peasant agriculture generally practiced in Africa,” Yambasu said.

Six bishops attended the summit. “This is an endorsement of the importance of the gathering and the agriculture projects that will come out of the conversations here,” he said.

“From this summit, I am going into action,” said Yambasu, who leads the Sierra Leone Episcopal Area. He said the country already has a conference committee for agricultural development that has been brainstorming agriculture enterprise and possible sites for the ventures.

Bishop Gaspar J. Domingos of the West Angola Episcopal Area said the church has prioritized health, education and agriculture since the arrival of the first missionaries.

“Each church station has its own fields for agriculture, not only to sustain pastoral work but to also support church activities

“The church owns vast tracts of land, but it is not utilized, because we do not have the capacity. We do not have machinery for commercial operations,” Domingos said.

Two years ago, West Angola asked Global Ministries to send a missionary to assist the area.

“The intention was to create a center in Caxito for the missionary to train farmers who will then cascade the knowledge to their communities. Periodic workshops would be held for the farmers to learn more techniques in planting, harvesting and other activities,” he said.

“We have to know that agriculture is pivotal to the development of Africa. I am thankful that the church has finally received the vision and call to awaken and address the issue,” he said.

“No one was able to carry on,” Kasap said.

“Since 2012, we have established two agriculture colleges: Katanga Methodist University at Mulungwishi and Kapanga School of Agriculture and Veterinary Sciences. But the problem is people do not want to go to school to learn agriculture,” he said.

He thanked Global Ministries and UMCOR for the inaugural summit, which has given a new vision for the church in Africa. 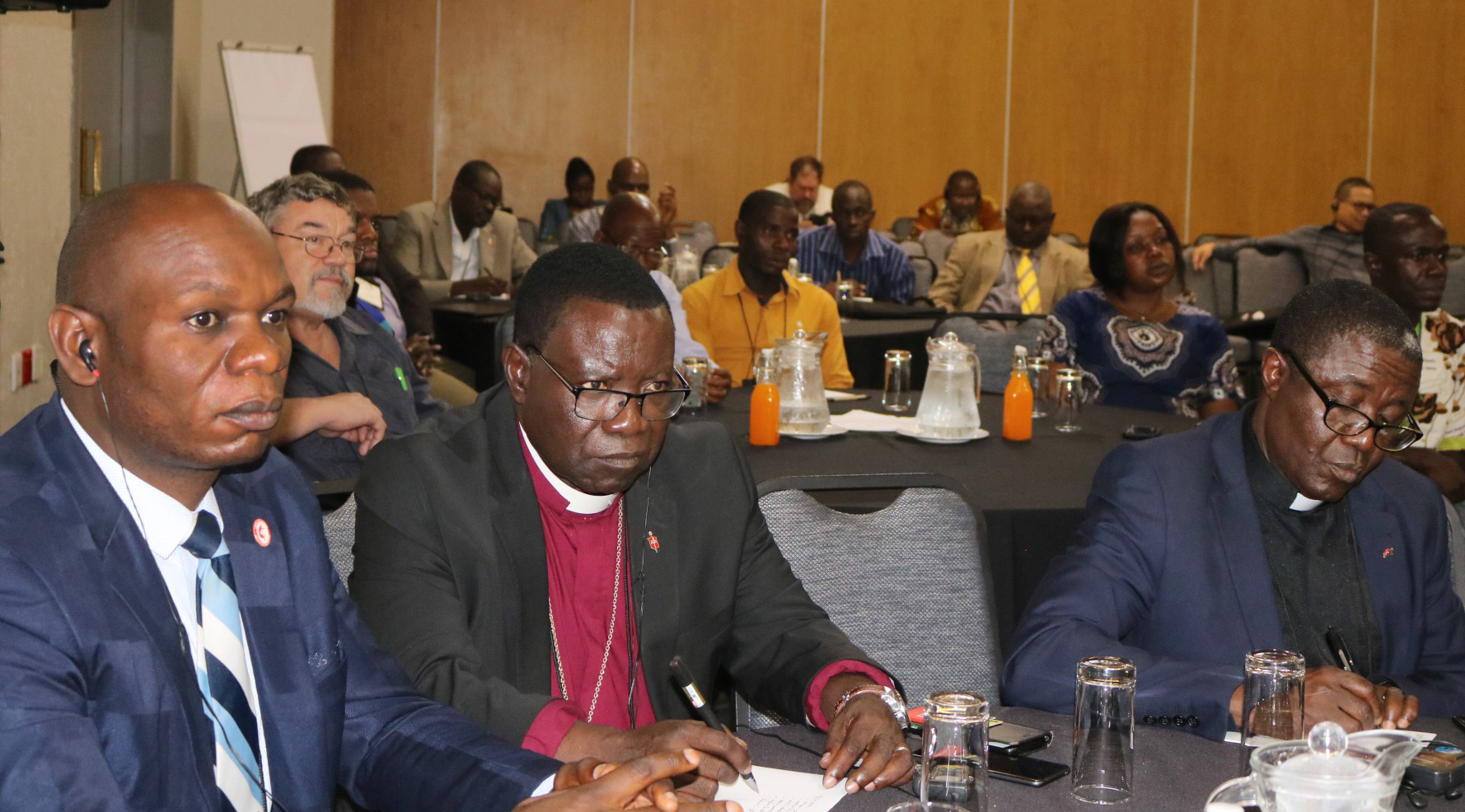 Bishop Kasap Owan from the South Congo Episcopal area (center) and delegates listen during the United Methodist Board of Global Ministries/United Methodist Committee on Relief agricultural summit in Johannesburg. Photo by Eveline Chikwanah.

Kasap’s area is planning a large cattle project. He said there also is a need to grow maize commercially as they are currently importing the crop from Zambia and South Africa.

The Nigeria Episcopal Area has an agriculture program director in each of its four annual conferences.

“For the past two years, we have concentrated on forestry and have been planting tree seedlings in order to address climate change and desertification. This was done with German mission board support,” said Bishop John Wesley Yohanna.

“We are planning more intensive agriculture projects but our main challenge is funding,” he said.

The agriculture directors are providing training on pesticides, use of fertilizer and other agricultural practices in local churches.

“We are encouraging local churches to buy bulls, which they will keep for two to three years and use them for farming during this period, after which they will sell them for a profit,” Yohanna said.

One of the church members who started his project over 30 years ago currently has more than 200 cattle.

“I got a lot of ideas from the summit, but we need financial support. The church has a lot of land but without much capital, commercialization is impossible,” he said.

Agriculture in the Mozambique Episcopal Area was boosted by the arrival of missionary John Nday at Cambine.

Bishop Joaquina F. Nhanala said Nday established some small vegetable and chicken projects but the area was planning to expand the operations.

“It is a reality that agriculture is one of the ways we can become sustainable but we need funding for irrigation equipment and salaries in order to establish commercial ventures,” said Nhanala.

United Methodist University of Mozambique is planning to offer agriculture, and the church currently relies on government institutions and Africa University in Zimbabwe for training.

“Women are the majority of breadwinners through farming in the villages, but we have few in leadership in agriculture projects,” she said.

In the Zimbabwe Episcopal Area, the concept of “The Lord’s Acre,” where local churches had land whose produce was sold to support the church, needs to be revived, said the Rev. Alan Masimba Gurupira, administrative assistant to Bishop Eben K. Nhiwatiwa,.

“The program slackened possibly because agricultural produce was not marketable, but after this summit, we can inject new interest in The Lord’s Acre at (the) grassroots level,” he said.

Currently, funding of activities at mission farms was the responsibility of station chairpersons, but Gurupira said the church would engage the Conference Finance and Administration board to allocate a budget for farming.

The church has benefited from government initiatives and was allocated some land in Murewa under the land reform program.

“Zimbabwe brought two experts to the summit, the Nyadire and Mutambara farm managers, to expose them to new ideas and technology and give them the opportunity to interact with their counterparts from the continent,” he said.

During a 2001 visit to the Fairfield Children’s Home, a South Carolina mission team promised to return. In October 2022, their team leader joined Africa University’s 30th anniversary celebration.
Mission and Ministry