Glenna Jackson's first trip to Africa was planned merely as a checkpoint on her traveling "to do" list.

But, when Jackson - a professor of theology and philosophy at United Methodist-related Otterbein University in Ohio - contacted Africa University in Zimbabwe and its dean, David Kekumba Yemba, about visiting the campus during her fall 2000 sabbatical, he invited her to come and teach. Yemba was elected as the university's third chancellor in 2008.

Jackson accepted, and that decision changed everything.

"The students I had there just got me hooked (on Africa)," she explained. "I had no choice but to keep coming back."

Since then, the 67-year-old United Methodist has made 15 trips to the continent and has co-taught a "senior year experience" course at Otterbein introducing African cultures through classroom studies and two-week stays in various African countries. At least 15 of the 102 students who participated have returned to Africa in some way, she said.

Now, Jackson's African travels have taken on an interfaith dimension through a relationship with Muslim women in a remote village in Malawi.

Hearing the stories of Africans

Her first insights into rural Africa grew out of a class she taught on the parables while at United Methodist-supported Africa University. As homework, she asked her students - all seniors already serving as United Methodist pastors - to bring in a personal story similar to one of the parables or explain how a parable would apply to their own village life. "They came with these outstanding insights into the first-century teachings of Jesus," she recalled. 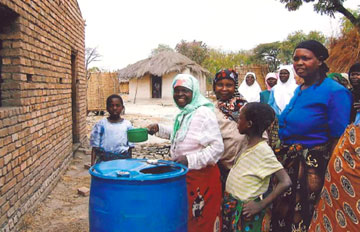 Women in Malawi observe a cleansing
with water before prayer in the mosque.

Jackson has expanded her understanding by accepting the invitations of her students to visit them in their villages in Zimbabwe and Burundi. This month, she is visiting a former student in Cameroon.

Those insights from her African students and her experiences in places far different from the United States have had an impact on her life. "Lots of things happen in Africa that wouldn't happen here," Jackson pointed out.

She wrote about these influences in her contribution to "When Faith Meets Reason: Religion Scholars Reflect on Their Spiritual Journeys," edited by Charles Hedrick and published by Polebridge Press in 2008.

In "From Hippo to Hippos," she reflects on finding herself on a motorboat in the middle of a hippo pool in Lake Malawi in 2002 and what "being on the edge of smash" by hippo in Africa means both in a physical and theological sense.

The Malawi connection came through the three students from Malawi who lived in the flat above hers at Africa University. "They loved chocolates, and I was the only one in the building who could afford to buy chocolates," she recalled. Jackson baked brownies and other chocolate treats, and her Malawi friends cooked group dinners.

Malawi "has a very high population of Muslims compared to other southern countries in Africa," she noted. According to the CIA World Factbook, about 13 percent of the Malawi population is Muslim.

When she received a grant from Otterbein to study the status of Muslim women in Malawi, she emailed Justice Khimbi about her project.

The Khimbis work as an administrator and clinical officer at a hospital in Nkhoma, in the mountains. Nyathipa Khimbi had seen Muslim patients from nearby Mpalale village and had learned their oral language. "It is a Muslim community group and very unprivileged by many resources but contains important social values to learn from," the couple told UMNS in an email.

Nyathipa Khimbi set up an appointment for Jackson with two women from the village and accompanied her there as translator in the fall of 2009. "When they arrived, there were 80 women waiting for us," Jackson said. "It was just incredible."

One of Jackson's daughters, a pediatrician, had come along. "Through Mandy, we were able to ask even more personal questions, in terms of the children," she added.

When Jackson finished her interviews, a woman asked, "We helped you with your project; what project are you going to help us with?" The only teacher in the village for the mostly illiterate adult women, she requested $25 to buy textbooks. 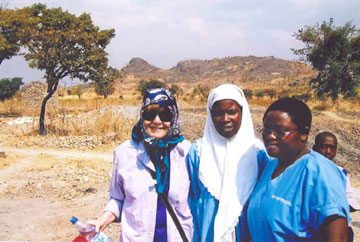 An ongoing project - and relationship - was born. Three months later, she took 12 students and money to install a water source closer to the mosque, so the women coming in from the fields during call to prayer five times a day would have a place to wash their hands.

Poverty is a bigger issue than gender in the remote mountain village, Jackson said. The women "work very hard," and even children who can afford to go to school drop out in their early teens.

The women do have status in the village one of the four chiefs is a woman and seem to lead happy, peaceful lives despite the hardships. They have greeted Jackson with open arms. "Anything I say they clap for," she said. "They're just so delighted to have anybody who cares to come visit them."

Last August, she and her husband, Gary, took a $1,000 grant to villagers from the Church of the Messiah, a United Methodist church that sits adjacent to Otterbein where Jackson serves as organist. The money was used to put a roof on the new mosque and provide flooring for the women's and children's sections. Her next visit tentatively is scheduled for June.

"She is a revered and eminent person to many Malawians, even to the minority Muslim group," Justice Khimbi said. "You would wonder how a Christian extends such help to non-Christians ... but that is what I call Christianity. She is a kind and loving mother, and we are proud of what she supports and believes in."