If seminary students and others want to dive into studying Hebrew, that’s wonderful, says the Rev. Matthew Richard Schlimm.

But he believes that just getting into the wading pool with that language leads to deeper understanding of the Old Testament.

Schlimm, a United Methodist elder and professor of Old Testament at the University of Dubuque Theological Seminary, is the author of the new book “70 Hebrew Words Every Christian Should Know.” 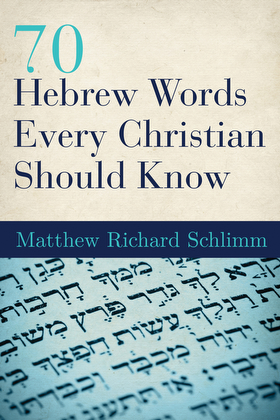 “70 Hebrew Words Every Christian Should Know” came out in August from Abingdon Press and already is in its second edition. The author, the Rev. Matthew Richard Schlimm, is a United Methodist elder and professor of Old Testament at the University of Dubuque Theological Seminary. Photo courtesy of Abingdon Press.

Even understanding that fraction of the Old Testament’s original language can make a big difference, Schlimm maintains. In his book, he sweetens the deal by providing lots of historical and cultural background, as well as theological commentary.

“My hope is that I’m giving students of the Bible a new tool so that they spot new things in the biblical texts,” Schlimm, 41, said by phone from Iowa. “Being able to access the depth that Hebrew brings is a huge gift.”

The book came out in August from Abingdon Press and already is in its second printing. The Rev. Joel B. Green, a United Methodist elder and professor at Fuller Theological Seminary, touted it in Catalyst, an online journal for United Methodist seminarians.

“From start to finish, Schlimm offers a veritable feast of theological reflection and exegetical insight,” Green wrote. “His readers are bound to have frequent Aha! moments.”

The book is aimed at three audiences — Christians who never took Hebrew, but want to go farther in Bible study; seminary students who need to be convinced of the “why” of undertaking a language with a very different alphabet and grammar; and pastors who once took Hebrew but need a refresher and perhaps an introduction to using the language in teaching and preaching.

In the book, Schlimm gives full explanations of the few Hebrew words that have entered the English language in transliterated form.

“Amen,” for example, doesn’t in its Hebrew understanding just mean the prayer is over. It comes from a cluster of Hebrew words meaning what’s true, trustworthy, reliable, faithful.

“When we say this word at the end of prayers, we’re signaling not only that we agree with the prayer but also that we’ll do what’s needed on our part for the prayer to come true,” Schlimm writes.

Many people in the pews and choir loft sing “hallelujah” without knowing what it means. Schlimm notes that the word appears 25 times in the Bible, exclusively in the book of Psalms, and simply means “praise the Lord.”

The book’s back cover reminds that “English isn’t God’s first language,” and Schlimm shares various Hebrew words and concepts that are, to one degree or another, lost in English translation.

The consequences can be major.

For example, English translations of Genesis have focused on the sound of its key Hebrew words and given us “Adam” and “Eve” and “Eden.” But a focus on the meaning of the Hebrew words in question would instead have the words translated as “humankind” and “life” and “delight.”

“The English translation sounds like an account of ancestors the farthest removed from us,” he says in the book’s first chapter. “The Hebrew sounds more like an account of human nature: what we’re like. The names’ meanings suggest we may have less a historical account and more a parable about God, humanity, our world and the loss of innocence.”

Schlimm writes that some of his seminary students, who feel a tension between science (particularly Darwin’s theory of evolution by natural selection) and faith, are angry that no one told them this earlier.

As an undergraduate at Asbury University, Schlimm first encountered Hebrew. He was enthralled when Bible professors translated a word or phrase to put light on an Old Testament text.

Schlimm went on to study at United Methodist-related Duke University, earning a Ph.D. in Hebrew/Old Testament. As a graduate assistant, he was asked to take over teaching a Hebrew course when the professor became too ill to continue.

Suddenly, Schlimm was an understudy thrust onto the stage and struggling to engage his students. He decided to try beginning each session with a brief, dual-purpose devotional.

“I’d pick a different (Hebrew) vocabulary word they’d studied that week, and make connections, showing why it’s relevant to ministry and the life of the church,” he said. “They loved it, and I loved doing it. Those theological reflections were sort of the genesis of the book, though that was at least 15 years ago.”

Schlimm would eventually join the faculty of the University of Dubuque Theological Seminary, a Presbyterian Church (USA) school approved for training United Methodist clergy. His wife is the Rev. Stephanie Schlimm, pastor of Epworth United Methodist Church, in Epworth, Iowa.

At Dubuque, Schlimm gets his Hebrew students into translating as soon as possible, using the book of Ruth because it’s only four chapters yet offers lots for discussion.

The innovative approach to teaching continues in “70 Hebrew Words Every Christian Should Know,” with Schlimm adding an appendix about the Hebrew alphabet that uses Star Wars words to demonstrate the sounds. His website has his own recorded pronunciation of Hebrew words discussed in his book.

Schlimm knows that many church folks find the Old Testament baffling and even off-putting, given its level of violence. He recalls from his pastor days hearing a parishioner say she loved the God of the New Testament more than the one in the Old Testament.

Throughout his writings, including many scholarly articles and the earlier book “This Strange and Sacred Scripture,” Schlimm has championed the Old Testament. He sees it as a work of teaching more than law, offering abundant insight and wisdom.

“It’s a very important friend in our faith,” he said.

And knowing a little Hebrew can make it a better one.