It was the sort of thing Jadon Olsen, 17, would do.

Driving home with his father, the Rev. Billy Olsen, and his younger sister, Amelia, the trio came upon a fallen limb in the road as one of North Carolina’s worst natural disasters was unleashing its fury.

The family had gone to Saint Luke United Methodist Church in Laurinburg — where Olsen is pastor — to watch a movie after losing power in the parsonage.

They were two blocks from home. They could have squeezed by the debris. But Jadon would have none of it. He told his dad they needed to stop and clear the road for the next traveler.

“That’s just the kind of guy my son is,” Olsen said from the Pediatric Intensive Care Unit at Levine Children’s Hospital.

As they were moving the limb from the road, another one fell and struck father and son. Billy Olsen remained conscious. But he could see that something was wrong with Jadon.

His son couldn’t talk. He was trying to sit up but couldn’t.

“I got down on all fours and laid on my son. If another branch came down, I was not going to let it hit my son.” And he prayed, too, during the 10 minutes he waited for help to arrive. 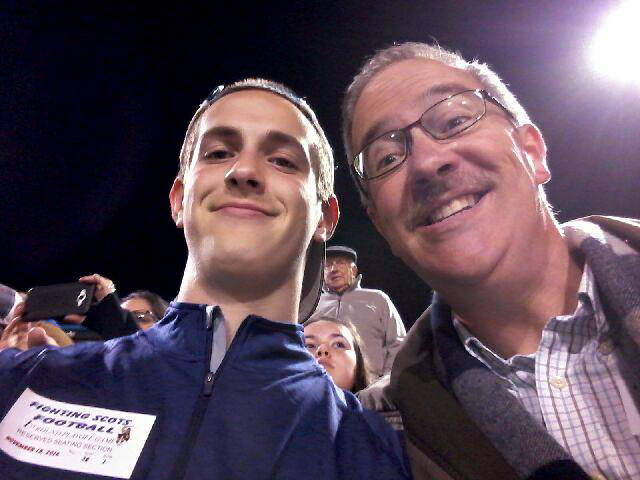 Olsen had a wound to the top of his head that required 12 staples at Scotland Memorial Hospital.

Jadon suffered far worse: a fractured skull that required a three-hour surgery to stop the bleeding and relieve pressure on his brain. Jadon is doing well, but faces a long recovery.

Olsen said he has “absolutely blubbered” over every inch of the hospital’s sixth floor. He smiled when he said his wife, Elaine, had to declare Jadon’s room a “no crying zone.”

Jadon is the third of the Olsens’ four children. A senior at Scotland Christian Academy, he plays varsity basketball, ushers at church and volunteers (he jokingly calls it “voluntold”) with Special Olympics, Vacation Bible School and more.

In her blog, Peace for the Journey, Elaine Olsen said her son is always ready with a Bible verse when someone needs one. “You see, if you know Jadon personally, you get this,” she wrote. “He loves life. He loves people.”

That’s what led him to stop in a hurricane to help the next guy.

The Olsens said they have been deeply comforted by the United Methodist connection.

Members of his congregation have visited, called, e-mailed and prayed. Fifty members gathered at the church to hold a vigil for Jadon the Sunday after the accident, as Florence was still buffeting Laurinburg.

A half-dozen United Methodist pastors from Charlotte have come to the hospital to visit. So has North Carolina Bishop Hope Morgan Ward.

In her blog, Elaine Olsen wrote about the sacred road of suffering, and the solace found in traveling that road together.

The accident has caused Billy Olsen to re-examine his prayer life. “I lay so many requests at God’s feet for a life of ease,” he said. "'God, make my life easy. God, fix my hurt.’”

He has a simpler prayer now: “Spare my son.”

It has also helped him see joy in a new way. No longer is it just a birthday, graduation or other milestone.

“I watched my son move his left foot,” Olsen said. “I’m not sure I was happier on the day my son was born or when he moved.”

Ken Garfield is director of communications at Myers Park United Methodist Church in Charlotte. Reach him at [email protected].

‘Church for nerds’ builds community without a building

As churches in the pandemic era have gotten creative with virtual worship, Checkpoint Church was designed to be exclusively virtual. They don’t even have a building.
Global Health

Fifteen United Methodist churches in Charlotte, N.C., have launched an effort to be a trusted place for vaccinations in a community that may lack access or be hesitant.
Church Leadership