As news spread of yet another mass shooting — this time in San Bernardino, California — politically charged debates broke out among Americans. The dispute: Should we be calling for prayer or action in response to rampant gun violence?

The answer is both, say many United Methodists who point to John Wesley — Methodism’s founder — as leading the way.

“The Wesleyan response to the plague of mass killing in this country is to pray without ceasing and then to act. Our action must emerge from prayer,” said the Rev. Steve Manskar, director of Wesleyan Leadership for United Methodist Discipleship Ministries.

“Our action must be born of love for God and for whom God loves.”

On Dec. 2, two assailants opened fire at a party held in the Inland Regional Center, a sprawling facility that serves thousands of people with disabilities. They killed 14 and left 17 wounded. After an afternoon car chase, police killed two armed suspects. Investigators are still trying to determine the motive.

The attack — the deadliest since the December 2012 assault in Newtown, Connecticut — came only five days after a gunman killed three people at a Planned Parenthood clinic in Colorado Springs.

A total of 462 people have died and 1,314 have been wounded in such attacks this year, the New York Times reports. By some estimates, the San Bernardino tragedy was the 355th mass shooting in the U.S. The Reddit “Guns Are Cool” tracker defines such shootings as incidents in which gunfire injures or kills four or more people.

This is the third time Bishop Minerva G. Carcaño, whose area includes San Bernardino, has confronted the aftermath of a mass shooting. Now at the California-Pacific Conference, she led the neighboring Desert Southwest Conference in 2011, when a gunman in Tucson, Arizona, killed six and wounded 13, including then-U.S. Rep. Gabrielle Giffords. She was also bishop in 2013 when a mass shooting at Santa Monica College left five dead.

Prayer is crucial, she said, but Christians are called to do more. “We need to continue addressing violence on many levels,” she said. “One of those levels is gun control. We also need to address violence in our homes. By that I mean we need to teach children that violence is not the way.” 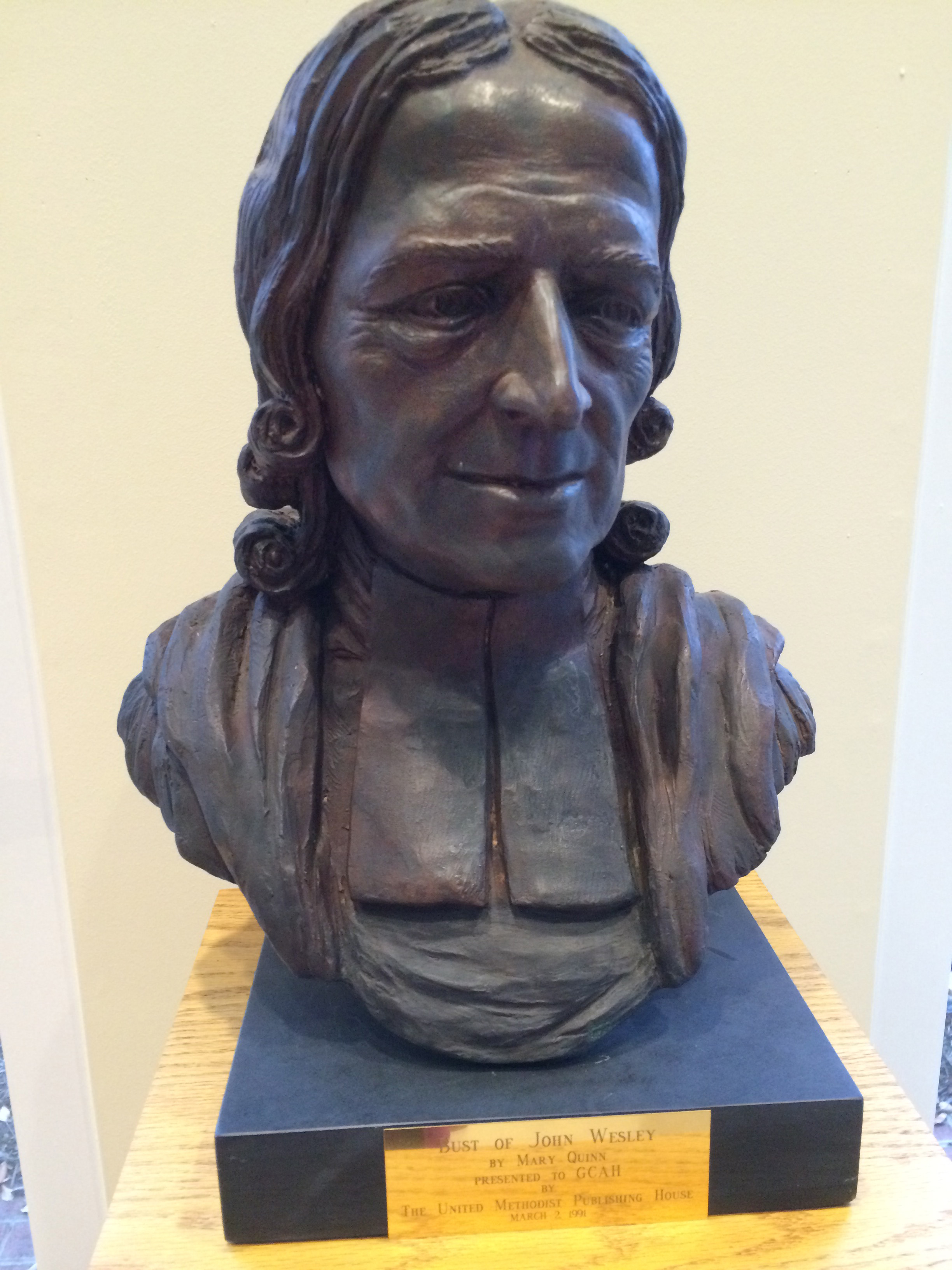 Wesley famously wrote in 1739: “The gospel of Christ knows of no religion but social; no holiness but social holiness.”

He meant that Christians are not to live out their faith isolated from other people. Wesley saw living in community as an important part of discipleship, explained a blog post by the Rev. Kevin Watson, a Wesleyan studies professor at Emory University’s Candler School of Theology.

That has implications for the way today’s Wesleyans live out their Christianity.

“It means, like the epistle of James said, faith without works is dead,” said the Rev. Alfred T. Day III, the top executive of the United Methodist Commission on Archives and History.

For Wesley, that meant both praying and advocating against the human evils of his day, including legalized slavery.

Wesley also was no stranger to violence, said Manskar of Discipleship Ministries.

“Wesley, and other Methodist preachers, were frequently victims of violent attacks from individuals and, at times, mobs who opposed their preaching and despised Methodism,” Manskar said. “Their response was to receive the blows and to get away. They did not arm themselves and return violence for violence.”

What the church teaches

For Bill Mefford, living out his faith means advocating with other United Methodists for measures at the state and federal level aimed at regulating the availability and use of firearms.

He leads advocacy against gun violence for the United Methodist Board of Church and Society, which promotes the denomination’s social teachings. In its Book of Resolutions, The United Methodist Church officially calls for supporting state and federal legislation to reduce the availability of guns in society.

He urges United Methodists to move beyond today’s political debates to think theologically. The Board of Church and Society offers a three-session, downloadable Bible study on gun violence. Titled “Kingdom Dreams, Violent Realities,” the study uses Micah 4:1-4 and its promise that nations “will beat their swords into iron plows and their spears into pruning tools.”

“One of the things we try to do in the Bible study is look at underlying issues,” he said.

He also urges that United Methodists advocate among their neighbors and leaders for change. He pointed to success that United Methodist campaigners recently had in Washington State, which in 2014 approved a voter referendum for universal background checks. However, Mefford said, he wants to see more federal regulations. California has some of the strictest gun laws in the country, but he said that doesn’t prevent people from bringing legally purchased guns from other states.

A Reflection on Mass Shootings

The Rev. Art McClanahan was in Newtown, Connecticut, not long after a gunman's horrific rampage in 2012 that claimed the lives of 20 children and six adults. He reflects on the power of prayer in addressing violence.

The Rev. Sandie Richards, pastor of First United Church of San Fernando, California, knows many think mention of “thoughts and prayers” is just a trite response.

“As Christians and as United Methodists, we know the power of prayer, and we know that we cannot move forward without it,” she said. “At the same time, acting for peace is as much a prayer as a head bowed. If we pray deeply, we can't help but be moved to act in response to end violence.”

She is working with interfaith colleagues in the Los Angeles area toward stronger gun legislation.

The Rev. David McGlocklin, senior pastor of St. Paul’s in San Bernardino, says his church is working to deal with violence at the source, with ministries addressing the poverty that burdens so many in his working-class community. The city declared bankruptcy in 2012 and, in recent years, McGlocklin said, it has seen frequent violence that doesn’t make the international news.

He said two shootings have taken place near his downtown church in the past year. After one shooting, church members prayed with the victim on the way to the hospital where the victim subsequently died.

“We’re doing a lot of outreach around the neighborhood around us,” McGlocklin said, “particularly to make this a safe place for them to be.”